Fantastic Friday: Rumble in the jungle

Reading the Fantastic Four comics from the start. Issue #404 has the Thing fighting a bunch of other Things, and… that’s it, really. 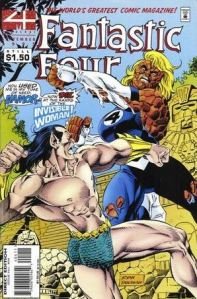 We open with Namor the Sub-Mariner, seeking revenge for losing control of Atlantis to the Inhumans during the Atlantis Rising crossover. He’s arrived at FF headquarters in search of Sue, demanding an audience with her. The only team member there is Ant-Man, who tells Namor that the rest of the FF are in Brazil. We then go there, where Ben is fighting Sue, Kristoff, and Lyja, all of whom have been transformed into Things like himself. (Short recap: an archeologist named Robeson found ancient ruins that resemble Ben, only for criminal jungle guide Mico to take over and use an alien device in the ruins to Thing-ize our heroes.)

While Ben tries to go easy on his teammates, Mico stands to the side with the other members of the expedition, who have also become Things, and are under Mico’s command. Robeson escapes, running into the jungle. He fears the damage Mico can do if he ends up with a whole army of Things serving him. Ben manages to escape his teammates and also escapes into the jungle, in pursuit of Robeson.

At HQ, Ant-Man shows Namor that he’s been tinkering with Dr. Doom’s space-time platform, turning into the FF’s personal transporter. He offers to teleport Namor right to Sue’s location. Namor makes a big declaration, saying it is time for him and Sue to finally be together, seeing as how she’s lost Reed and he’s lost all of Atlantis. Kristoff’s aid Boris watches mysteriously from a distance.

Ben re-encounters Sue, Lyja and Kristoff in the jungle, where they reveal they still have their powers in addition to their new Thing strength. Namor teleports into the middle of the fight, and Sue immediately attacks him. Ben catches up Robeson, who theorizes that the effects of the alien device might fade over time, but he doesn’t know for sure.

At HQ, Boris ducks around the corner for some privacy, thinking about how much he dislikes this “time era” and that he’d rather be dealing with Thor instead of the FF. He contacts a mysterious figure hidden in shadow. The man in shadow says that if history is to believed, the Fantastic Four are about to reach a critical juncture with huge consequences. Because this is a re-read and not a first-time read, I’m going to spoil it. This is the first ever appearance of Hyperstorm, who, although short-lived, is about to become one of the most influential baddies in FF history. Anyway, Ant-Man’s daughter Cassie eavesdrops on the conversation, and Boris catches her.

There’s a few pages of Sue fighting Namor, followed by Ben and Robeson returning to the ruins. There, Ben finds hieroglyphics showing men being transformed into Things and back again. Ben wonders if this could be his chance to become human again. Mico shows up with other Things, saying he’s going to turn them into his own personal mercenary squad and become with world’s most successful mercenary. This doesn’t seem like all that evil of a plan, but Ben won’t have it. He fights the other Things.

At HQ, Boris is in search of Cassie, who ran off. He runs into Ant-Man and immediately pulls out a laser gun and fires. Ant-Man dodges the blast. He wonders where Cassie is, and fears that if Boris is a traitor to the FF, then Kristoff might also be. Meanwhile, Ben fights the other Things inside the ruins, while Sue fights Namor in the jungle. The other Things finally get the upper hand on Ben, and beat him senseless. The effects of the alien device then wear off, and all the Things become human again.

Sue and Namor hurry to the ruins. Mico pulls a gun on them, but he doesn’t stand a chance against Sue’s force fields and Namor’s strength. Ben is unconscious, and Robeson fears that he may be suffering from internal injuries. He suggests using the alien device to turn Ben back into a human to save him, as long as Ben’s body can survive the shock of transformation. Sue agrees to try it. With Kristoff using his genius to man the device’s controls. The machine fires up, and we’re left to wonder the final fate of the Thing.

Fade out: The fight between Sue and Namor is an excuse for a rage-filled Sue to call out Namor on his years of creepy behavior, including his trying to take advantage of her as she mourned for her dead husband.

Clobberin’ time: This issue remembers that the scars on Ben’s face are highly sensitive, and really does look painful in panels when he gets punched right in the scars.

Kristoff’s Doom armor appears to change size with him, first growing to Thing-size, and then, more interestingly, shrinking down to little kid-sized when little Kristoff becomes human again.

The Alicia problem: When Mico pulls an ordinary pistol on our heroes, Lyja doesn’t make a move to stop him, for fear that Mico might shoot Kristoff. Sue and Namor, however, don’t think twice about using their powers to disarm Mico.

Commercial break: Together at last! 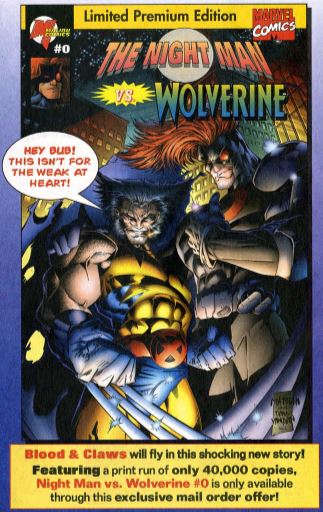 Trivia time: I’ve given up trying to track the confusing history of Dr. Doom’s time machine, and all the places it’s shown up. Fortunately, the Marvel Wiki has done it all for me. The wiki insists that the original time machine is back in Latveria inside Castle Doom, and that the one seen in this issue is a replica created by Reed. Ant-Man’s tinkering means it’s now a plain ol’ teleporter as well as a time machine.

Fantastic or frightful? I don’t know. Kind of a placeholder of an issue, waiting to make the big reveals and the big drama for the next one. Some of the fights and action is interesting, but that’s about it.

Next: Moose and squirrel.