Reading the Fantastic Four comics from the start. We’ve reached issue #406, and I’m afraid we have to talk about Hyperstorm.

We begin in the lab at Four Freedoms Plaza, where Kristoff is experimenting with the tech recovered from Zarrko the Tomorrow Man, which may or may not lead them to Reed and Dr. Doom, who may or may not be still alive. The device explodes, which the team interprets as a “No trespassing” sign to wherever Zarrko’s path might have led. There’s a short debate among the FF, along with guest stars Lyja and Namor, about where to go next. Some want to collect more information, but Sue vetoes them, saying they are following Zarrko’s trail within the hour.

We then catch up with Zarrko, very much alive although he appeared to die in the previous issue. He’s in an otherworldly tower-like building, talking to his mysterious cloaked master. The mystery man checks on a “guest” of his, a prisoner in tattered rags whose face we don’t see. The prisoner is attached to the strangers “brain disarrator” which the stranger says removes all coherent thoughts. The stranger then gets word that rebels have overrun the capital city on planet Alterra-4, so the stranger orders an army of robot Destructoids to kill the rebels. Zarrko contemplates how his master has done this to many other worlds and civilizations.

At HQ, the FF prepares for a journey, as we catch up on everyone’s subplots. Namor tries to convince Sue that Reed is dead and she must move on. She reminds him that he searched for Atlantis for years back when everyone else believed it was gone forever. Ant-Man tries to befriend Kristoff a little more, but Kristoff brushes him off. Ant-Man and Namor both wonder if Kristoff can be trusted. Lyja tries to contact Johnny, who is away with the Fantastic Force spinoff team, and Sue tells Lyja she has an idea. Ben is using another alien device from the previous issue to transform himself from human to a Thing whenever he chooses, although the device still can’t heal the scars on his face he got from Wolverine a while back. 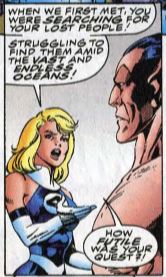 Sue, Ben, Ant-Man, Kristoff, and Namor prepare for the journey. Sue dons one of the FF’s cool brown adventurer vests, saying she sent Lyja away on another mission. They’re about to leave, using the lab’s recreation of Dr. Doom’s time machine, when Nathaniel Richards conveniently teleports into the lab with a dire warning. He says he knows what menace the FF are rushing off to face. Nathan says the stranger is the man who originally forced him to become a wanderer throughout time and space. (“I know him intimately!” Nathan says, which raises a lot of questions.) Sue demands more answers but Nathan falls back on the classic “You’re not ready,” so the FF leave without him.

Nathaniel attempts to teleport back to back to Latveria (remember that he’s currently fooled the world into thinking he’s really Dr. Doom) only he gets teleported to the stranger’s tower instead. The stranger says he is seeking absolute power, blind obedience, and total domination.

The FF arrive not in an alien landscape, but in what appears to be a small European village, where the locals welcome them as illustrious guests. Kristoff’s sensors reveal the villagers are all robots. They want to escort the FF to the “master” and when the FF refuse, a fight breaks out. They fight for a few pages until the FF are knocked unconscious by a classic Marvel bolt-from-the-blue.

Later, the FF awake in the stranger’s lab, frozen in stasis fields. Sue’s vest she was wearing? That was the shape-changing Lyja all along, who frees the team. They find their way to the prisoner from before, revealing it to be the long-thought-dead Dr. Doom. Kristoff recognizes Doom immediately and tries to use his high-tech armor to communicate with Doom.

Then the mysterious stranger reveals his identity. Yes, this is the one and only Hyperstorm. We’ll get to his origin later, but the concept is that he’s the master manipulator, the one who’s been pulling the strings for dozens (hundreds?) of issues by now. Truly, the most villainous of all villains. Then we get to the actual comic, and just look at this guy:

Hyperstorm says where he comes from, stories of the FF are the stuff of legend. He says the FF will be his honored guests, except that they cannot leave his tower for the rest of their lives. Our heroes won’t have that, so they attack. They’re no match for Hyperstorm, who fights back with his “hyper-power” which he says is greater than the power cosmic (this means he’s more powerful than the Silver Surfer, I guess).

It’s a short fight, as Hyperstorm wipes the floor with the FF. He then threatens to reveal to them the final fate of Reed Richards, by having the heroes “join him!” There’s a huge blast of hyper-power, and the FF appear to be reduced to nothing but dust. If this wasn’t enough of a cliffhanger, turn the page and we learn that Kristoff’s signal reached Dr. Doom, who has regained his intellect, and is already plotting his revenge.

Fade out: Hyperstorm is able to shatter (!) Sue’s force fields, and he appears to have invisible force fields of his own in one panel, somewhat foreshadowingly.

Clobberin’ time: Ben is drawn without the scars on his face in a few panels. The Marvel Wiki gives up and just plain admits this was an error.

Fantastic fifth wheel: Ant-Man stays behind to operate the teleporter so the FF can return, but that option appears off the table once Hyperstorm abducts everyone.

Kristoff confirms that this is the real Dr. Doom, saying he’d know his former master anywhere.

The Alicia problem: Lyja wants to call Johnny. She says it’s to invite him along on the mission, but I think it’s unspoken that she still wants to get back with him. Hyperstorm would seem to agree, as he addresses Lyja as “Mrs. Storm.”

Commercial break: Somebody at Marvel thought Lunatik would be the next big thing. 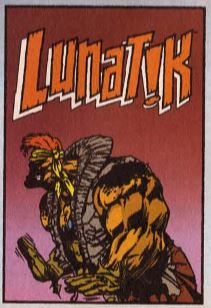 Trivia time: Seeing that this issue’s editor is “Nel Yomtov,” I assumed that was another sneaky Marvel editorial pseudonym, but no, that’s a real person. Yomtov was a big player in Marvel’s Transformers and G.I. Joe comics, and he went on to write a series of children’s books about real-life historic events.

Fantastic or frightful? This Hyperstorm guy is supposed to be one of the most important characters in Fantastic Four mythology, and yet he’s so incredibly goofy. If this truly was writer Tom DeFalco’s end game all along, then its sadly underwhelming. 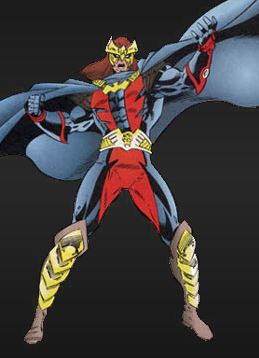 Next: It had to happen sometime.