Fantastic Friday: Getting the reboot

Reading the Fantastic Four comics from the start. Here’s Heroes Reborn, where comics superstar Jim Lee took over the series. This is vol. 2 #1, a whole new beginning… or is it? 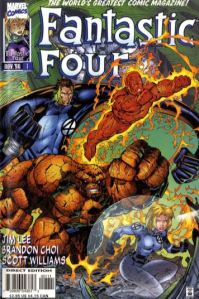 After experiencing unprecedented success and popularity in the early 90s, the comic book industry faced an equal and opposite reaction with a crash of dismally poor sales around 1996-7. Marvel attempted to bounce back with Heroes Reborn, bringing back a bunch of the Image creators, who first rose to fame at Marvel, to breathe new life into long-running properties. Jim Lee’s Wildstorm Studios rebooted Fantastic Four and Iron Man, and the notorious Rob Liefeld and his Extreme Studios rebooted Captain America and The Avengers.

While this appears to be a hard reboot, we are technically still in Marvel continuity. When the FF and the Avengers appeared to die stopping the evil Onslaught, they were really sent to a pocket universe, starting their lives anew with no memory of what came before. More to the point, while their story starts over in Fantastic Four, it also continues in the regular Marvel Universe. The fight over the now-abandoned Four Freedoms Plaza continued in a lot of comics, most prominently Thunderbolts, and the still-alive Franklin Richards took on a supporting role in Cable, in an attempt to make him more of an X-Men character rather than an FF one. Despite Jim Lee’s involvement, these pocket universe issues are often dismissed as inconsequential, but I say let’s dig into them and see what we can see.

Gimmie a gimmick: This issue had a variant cover. The regular cover showed our heroes charging into action, while the variant showed them facing off against the Mole Man. (Whoa, spoiler!) 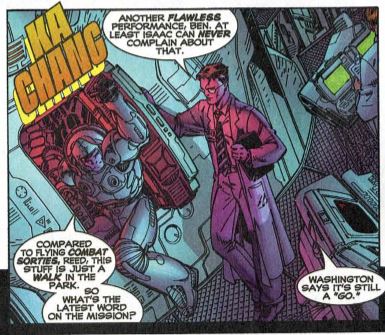 The issue begins with a familiar retelling of the FF’s origin, specifically the original four flying their spaceship through the cosmic ray belt. But there’s a twist — this is a dream that astronaut Ben Grimm is having while inside a space simulator. The simulation is overseen by scientist Reed Richards and his assistant, Isaac. Reed explains that Ben should be piloting a real spacecraft, if not for an injury he received fighting in the Gulf War. Reed and Isaac are busy preparing their new experimental aircraft, the Excelsior (get it?) capable of traveling outside Earth’s solar system. Ben gets a call from Sue Storm, who is asking for Reed. Sue is head of the Storm Foundation, who is funding the launch. She mentions her brother Johnny, head of Storm Casinos in Vegas. She adds that the Excelsior is being built in secret, and everyone has high hopes for when it goes public. 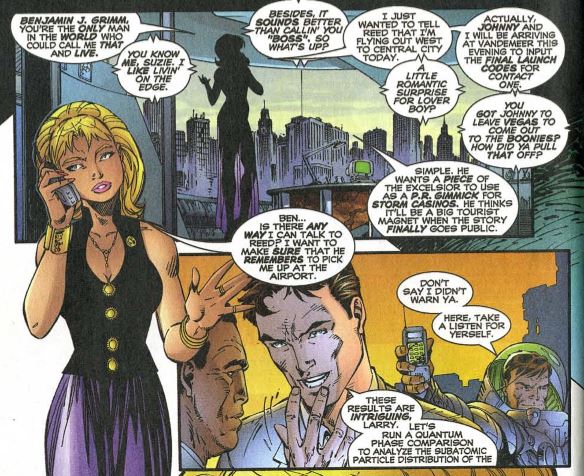 Sue is interrupted by Uncle Matthew, who shows up with US Secret Agent Wyatt Wingfoot. Matthew says Sue is off the project, and Wyatt is now in charge of the Excelsior, by orders of the president. A strange energy fluctuation has been discovered in nearby space, and the Excelsior is being commandeered by the government to investigate.

Cut to a TV reporter to “American Tabloid” doing a news report of possible alien sightings out in the desert. Reed and Isaac watch the report, dismissing it as hogwash. Reed, however, is study the same space anomaly as Wyatt. Reed suspects it’s fallout from a wormhole to another universe, and that this could result in mankind’s first contact with aliens. 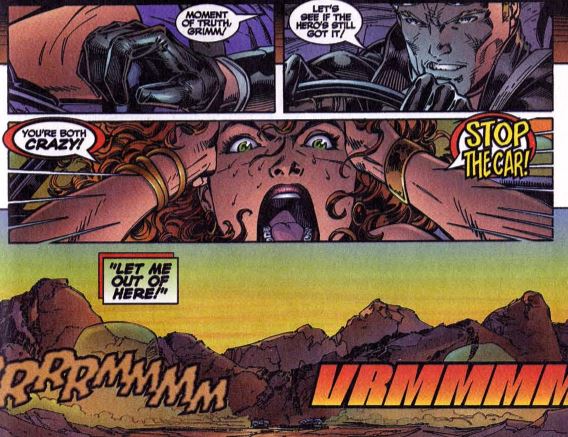 Out in the desert, Ben is on a ride in his jeep, where he nearly crashes into a speeding sports car. The cool car is driven by Johnny, with his girlfriend Tiffany beside him. Johnny and Ben play chicken with their cars, driving right at each other while Tiffany panics. Tiffany goads Johnny into turning the wheel at the last second, losing the game. Ben drives off laughing, while Tiffany says she’s walking back to town.

Sue arrives, and is greeted by the airport by Ben. They joke around a bit before Ben notices Wyatt and a bunch of other secret agents with him. At the base, Reed is furious that government is taking over the launch. Wyatt introduces himself as an agent of S.H.I.E.L.D., which is defined as a “deep cover black ops agency.” When Ben threatens to start a fight, Wyatt has both he and Reed locked up. He asks Sue and Johnny for the launch codes (it’s not made clear why casino-owning Johnny has launch codes). Johnny says he’ll sue Wyatt, so Wyatt punches him out. Then Wyatt uses a small electric weapon to murder Isaac (!). Wyatt says the energy in space is a “harbinger” which must be destroyed at any cost. They haul Sue away and Wyatt contacts his boss, a mysterious masked man named Victor Von Doom. Doom asks for a report, while letting the reader know that Wyatt’s S.H.I.E.L.D. credentials were faked. Wyatt says the Excelsior is being loaded with missiles and that “phase one” is complete. 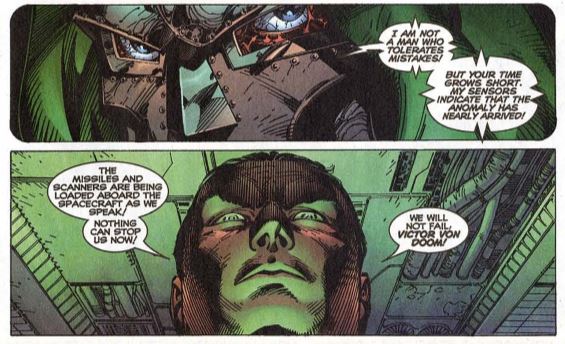 Reed and Ben are locked up in a cell, which conveniently overlooks the launch site. Ben spots Wyatt’s men loading a nuke onto the ship. Reed fears they are helpless to stop Wyatt, but Ben says he has an idea. Nearby, Sue and Johnny are being taken away by Wyatt’s men, only to fight back with some sweet martial arts skills. They fight their way to Reed and Ben’s cell, freeing them. Reed and Sue share a kiss, revealing they’ve been in a relationship this whole time. 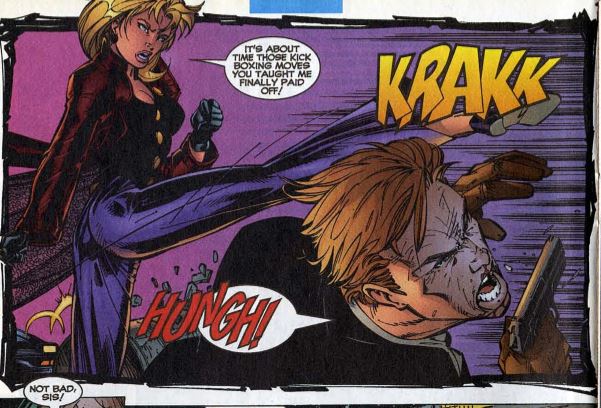 The Excelsior launches, so the four heroes make a plan to pursue it in the prototype, which is what Ben was using to run his simulation at the beginning. The prototype launches and pursues the Excelsior into space, with both ships reaching the space anomaly, depicted a green nebula-looking thing. Reed and Ben pickup an increase in subspace from the anomaly. Reed recognizes it as a pattern, confirming an intelligence coming from within the wormhole. They see what appears to be a humanoid shape come from inside the anomaly, and Reed mentions tachyon emissions directed at two specific points on Earth.

The Excelsior then fires the nuke. The anomaly explodes, and the prototype is bombarded with radiation. Reed, Sue, and Johnny hurry to the escape pods as the prototype falls apart around them. Ben stays behind in the cockpit in a last-ditch attempt to steer the ship back to Earth. 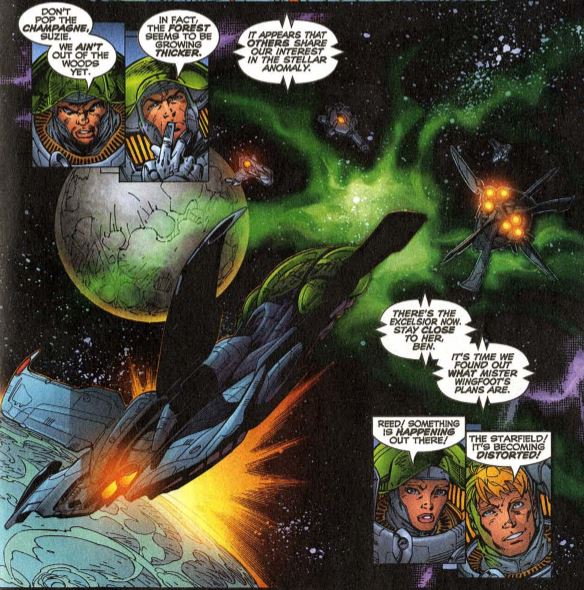 The prototype crashes on an island in the Bermuda Triangle. Johnny is the first to emerge from the wreckage, covered in flame. Despite being on fire, he manages to say, “I’m lit up like some kind of human torch!” The fire makes him lighter than air, so he’s able to fly to the nearest body of water. He then finds what looks like some sort of snake at first, only to discover it’s a human arm. It belongs to Reed, who can stretch his body to incredible lengths. Reed deduces that the radiation has mutated their bodies an given them fantastic powers.

Ben is next, also having survived, only for one hand to be mutated into a rocklike form. Then we catch up with Sue, who survived the crash alongside the prototype’s reactor core. Except the core is damaged and is threatening to explode, taking the entire island with it. Sue runs into Ben, now fully transformed into a huge rock monster. He says it best, “I’ve turned into a monster! Some kind of thing!”

Reed and Johnny hear a mysterious roaring sound, and they investigate. The ground falls out from under them, stranding them in an underground cavern surrounded by strange subterranean creatures. They surrender, not knowing the creatures intentions. Reed also spots cave marking similar to the signals he received from the anomaly, making this one of the two Earth locations mentioned in the alien signal. The subterraneans take them to where Sue and Ben have been chained to a stone pillar, about to be… Fed? Sacrificed? … to a giant monster. Sue turns invisible, distracting the monster long enough for Ben to get free and punch out the monster. Reed and Johnny join the fight, temporarily driving back the subterraneans.

The four heroes compare notes, and Sue insists they get back to the reactor core before it blows. Then they are approached by the leader of this underground world. It’s the Mole Man. He says he has recently acquired the power to bring mankind to its knees.

Unstable molecule: Reed wears glasses at the start of this issue, something I don’t recall him doing before. The glasses vanish mid-scene on page 4 and never return, though.

Fade out: One big change in this version is making Sue a high-up corporate type, except there’s very little information about what the Storm Foundation is, or its role in funding the space launch.

Clobberin’ time: Ben being a Gulf War vet instead of a World War II vet is one of the examples everyone always cites of how Heroes Reborn was an attempt to “modernize” the classic heroes.

Flame on: The other big change is making Johnny a casino owner, who’s shtick throughout this issue is making things marketable and making a quick buck whenever he can. Let’s keep an eye on how (or if) his character evolves during Heroes Reborn. 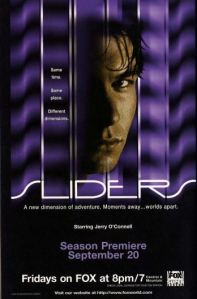 Trivia time: According to the Marvel Wiki, this is the only appearance of Reed’s friend Isaac. We hardly knew him. Johnny’s girlfriend Tiffany gets no entry in the Wiki, so let’s assume this is also her only appearance.

The Dr. Doom/Wyatt plotline will get an explanation in issue #5.

Fantastic or frightful? I’m fine with Jim Lee’s art. I’m fine with all the early Image guys, if we’re being totally honest. You can see in this issue the start of what would become the “widescreen comics” trend of the late ‘90s/early 2000s comics with an attempt to make comics more like blockbuster films. That’s the attitude here, as Lee and co-writer Brandon Choi make their own Star Trek movie for most of the issue. Lee’s depiction of Ben is especially eye-popping. So, it’s all good, and it makes me excited to read the next 12 issues. 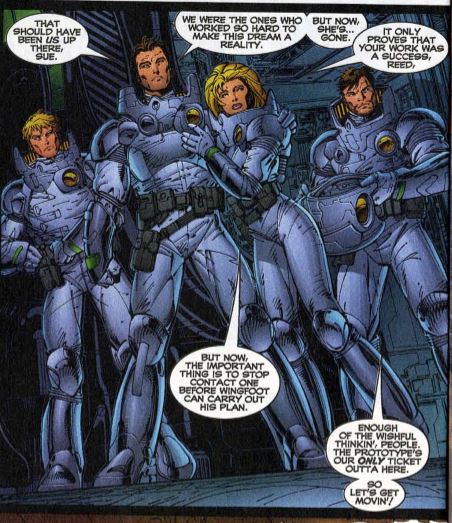