Fantastic Friday: All this and Namor too

In this newly-rebooted timeline, the FF made their fateful spaceflight to stop S.H.I.E.L.D. from destroying a space anomaly that might contain alien intelligence. Our four heroes were irradiated in the fight and gained their powers, only to crash land on a mysterious island and be taken prisoner underground by the Mole Man. As this issue begins, we see the Mole Man has the ship’s damaged quantum drive, and is threatening to use it to destroy the surface world’s greatest cities as a sacrifice to the “great one.” Reed and Ben agree that the damaged drive could explode, vaporizing the entire island.

Johnny attacks, but is no match for the Mole Man’s energy staff, which he uses to control not just the animals on the island, but the plants and the ground as well. He buries Johnny in mud and sends some of his strange monsters after the other three. Ben and Reed work together to stop the monsters, only for the Mole Man to say they can’t defeat all his minions. Sue and Ben then quickly work out a plan to shine light off a giant diamond (this cave is filled with diamonds) right into the Mole Man’s sensitive eyes.

The FF recover the quantum drive and escape to the surface of the island. A bright light shines in their faces, telling them their problems are solved. We then abruptly cut to the undersea kingdom of Atlantis. Lady Dorma meets with Lord Krang. Krang wants to meet with the prince to discuss revealing themselves to the surface world and conquering the Earth, but Dorma says the prince is still in mourning. Then another Atlantean swims up, saying his sister is near death, having been infected with “dark waters.” Krang has heard enough, and breaks in to meet the prince, Namor. 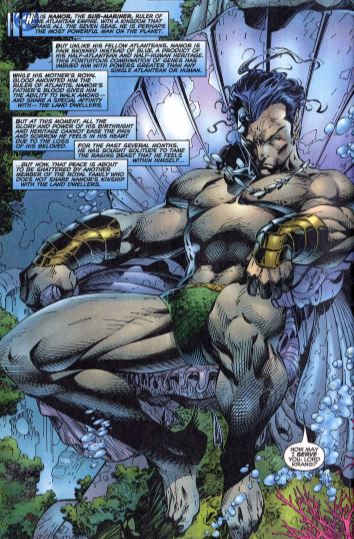 Namor gets a splash page (heh) introduction, explaining his half-human heritage and his recent ascension as the new ruler of Atlantis. The caption states, “He is perhaps the most powerful man on the planet.” Namor is moved by Krang’s description of the “black poison” from the surface world, and he says the time has come for humans to feel the wrath of Atlantis.

Elsewhere, the FF wake up, having been knocked out by a “synaptic scrambler.” They’re trapped in a plain white room, now wearing matching white suits. They figure out how to escape by using their powers in tandem. They’re attacked by gun-wielding guards, so Ben punches a hole to the outside, only to discover they are on board a giant floating platform. (You and I know this is a S.H.I.E.L.D. Heli-carrier, but the comic frustratingly never tells us that this is S.H.I.E.L.D. So much for attracting new readers.) The FF are captured again and taken before Director Nick Fury.

Fury believes that Reed went to space to destroy the anomaly, and Reed says he thought S.H.I.E.L.D. was going to destroy it. Before they can further compare notes, there’s an alert that Namor and the Atlantis army has attacked New York, converging on the UN Building. Reed says the FF’s new powers can be used to help. Fury agrees, adding that he had nothing to do with Wyatt Wingfoot betraying the team last issue. The heroes prepare for battle in some modified S.H.I.E.L.D. suits. (And here’s where the issue finally uses the name “S.H.I.E.L.D.”) Sue borrows some tape from a S.H.I.E.L.D. agent (convenient!) and tapes a “4” logo onto the team’s suits, so show they are not S.H.I.E.L.D. agents, but a team of their own.

In NYC, Namor is out just randomly trashing cars when Ben and Johnny drop down from above. Namor easily punches out Ben, but decides his army isn’t enough. He uses his trumpet horn (which he just had on him, I guess) and he summons the giant monster Giganto, saying his vengeance will not be denied.

Unstable molecule: By stretching part of his arm over the wall of their cell, Reed can tell what the wall is made of and how breakable and/or flammable it is.

Fade out: Sue turns part of the Mole Man’s cave wall invisible, just enough for light from outside to steam in. This again begs the question of how do her powers work around light again?

Clobberin’ time: Ben says he knows Nick Fury, that Fury saved his life once during the Gulf War. But then Fury suggests he’s a lot older, saying he hasn’t seen Namor since “the big one.”

Flame on: We’re continuing the running gag of Johnny being a money/merchandizing guy when he says the Fantastic Four name could be a great marketing gimmick.

Commercial break: Marvel spent five pages of house ads in this issue promoting Deadpool #1, in case you’re wondering how Deadpool ever got popular:

Fantastic or frightful? Instead of a hard reboot, this feels more like the same old Marvel Universe we all know. It’s also a case of too much content, as the Mole Man and his ARMY OF MONSTERS is completely forgotten about after a few pages just so this can be a Namor/S.H.I.E.L.D. issue. Jim Lee continues to bring the ‘90s “Image house style” to this, and unfortunately that’s the best thing about the issue.

Next: The outfit’s a bit much.