Rewatching the Universal monsters! The ones on the Blu-ray box, at least. This means we begin with one of the biggest and best, Dracula. Bela forever! 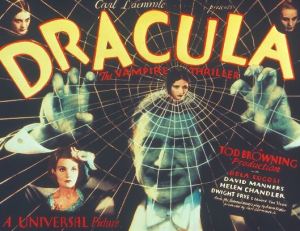 Here’s what happens: Count Dracula purchases a piece of property in London. Turns out he’s really a vampire, and he’s left the old world to come to London in search of new blood. 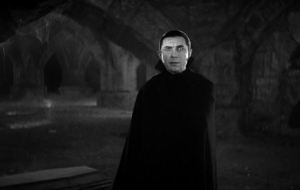 Monster!: What can I possibly say about Bela Lugosi as Dracula that hasn’t already said? It’s a rare thing for a single performance to define a character for all of history.

Also a monster!: As the demented Renfield Dwight Frye threatens to steal the movie from Lugosi. You could argue that the characters bring him in to be interviewed not once or twice but three times is too repetitive, but that third interview gives us Renfield’s “Rats!” speech, which is all good.

Dracula’s three brides don’t do much except add to Dracula’s dark mysteriousness, and they do that well.

Our hero: After Lugosi and Frye, the movie’s other powerhouse performance is Edward Van Sloan as Van Helsing. Although he’s a far cry from the action hero Helsing of recent adaptations, the scene where he stands up to Dracula personifies the movie’s “logic defeats superstition” theme.

Hapless humans: Helen Chandler as Lucy has a great scene near the end of the film where she is partially mesmerized by Dracula. Beyond that, characters from the original novel, Jonathan Harker, Dr. Seward, and Lucy Westerna don’t make as much of an impact, and their scenes are the ones some people use to criticize the movie as too talky or old fashioned.

Frights: It’s true there’s not a lot of action in Dracula. The scary scenes are all atmosphere, with violence happening offscreen. This is partially because of censorship of the time, and partially because director Tod Browning loved classic gothic literature and wanted to capture that feel. The real fear of Dracula is not necessarily biting and blood, but that feeling that someone might be sneaking into your bedroom at night while you’re sleeping with you unaware. 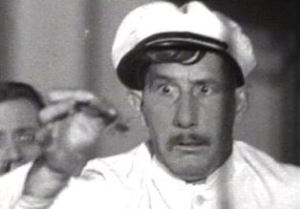 Laughs: For comic relief, Charles K. Gerrard plays sanitarium worker Martin. Although he’s represents the lower class, and yet he too represents logic defeating superstition. His funniest lines come from how he has zero patience for any of this supernatural craziness.

Thoughts on this viewing: Is Dracula truly a masterpiece, or is it a movie with some great scenes and some boring scenes? I’ve gone back and forth over the years, coming down on the “masterpiece” side. The too-talky scenes demand your attention, containing important character and story beats that can help you appreciate the spooky atmospheric scenes. And Lugosi is terrific, of course. 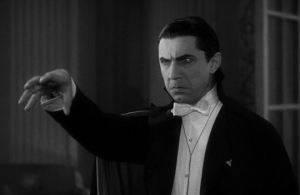 Next: Up all night.