Rewatching the Universal monsters! The ones on the Blu-ray box, at least. Director James Whale is back, bringing his signature combination of creepiness and comedy to 1933’s The Invisible Man.

Here’s what happens: A mysterious bandaged man rents a room above an especially quirky inn. It’s eventually revealed that this is fugitive scientist Jack Griffith, whose experiments have turned him… invisible!

Monster!: Claude Raines plays the Invisible Man with equal parts menace and macabre humor, often with just his voice in some scenes. I was reminded a little bit of Freddy Kruger, a jokey monster who will totally kill you while cracking wise. Of course, we mustn’t forget all the effects that brought the Invisible Man to life. The filmmakers really went the extra mile to add a lot of little details to convince audiences there’s an invisible man in the room.

Also a monster!: Fellow scientist Kemp appears at first to be the romantic lead, but he’s quickly recruited to be the Invisible Man’s reluctant accomplice. It’s great fun to see Kemp get more and more frightened and panicky as the movie goes on.

Our hero: If Kemp isn’t the hero, who is? That would be the character known only “Chief Detective.” The mind games he plays with Invisible Man in the second half of the movie are thrilling, as the two are evenly matched in their attempts to outwit each other. 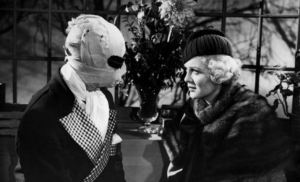 Hapless humans: Flora (Gloria Stuart from Titanic!) is the Invisible Man’s former love who humanizes our villain somewhat. Her father and fellow scientist Dr. Cranley (Clarence from It’s a Wonderful Life!) to provide some exposition.

Frights: Invisibility also turns a person murderously insane in this movie, so the Invisible Man doesn’t care who he kills, and goes a spree where he strangles folks and derails a train. Universal liked the train crash footage so much, the studio reused it later in other films. 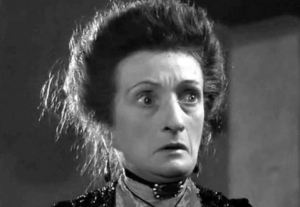 Laughs: The inn is filled with all sorts of kooky characters, but none kookier than Una O’Connor, whose shrieking hysterics are delightful to some and annoying to others, but nonetheless something the movie is famous for.

Thoughts upon this viewing: The Invisible Man is just a delight from beginning to end. Smartly written, lovingly crafted, and acted with a sense of fun and playfulness. An absolute must-see.

Next: Nice day for a white wedding. Nice day to… START AGAIN!!!