Reading the Fantastic Four comics from the start. We’re officially halfway through Heroes Reborn with issue #7 (a.k.a. Vol. 2 Issue 7). I suspect the writing was on the wall by now that Heroes Reborn wasn’t working out, hence the sales-friendly Wolverine cover. 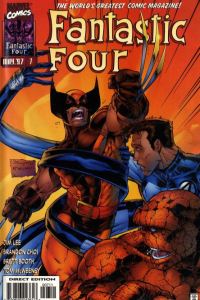 The issue begins with Ben in the hospital, following his guest spot in Heroes Reborn: Iron Man #6, in which he destroyed a gamma core to save New York, severely burning his hands in the process. Johnny jokes with Ben, pretending to give him a “Game Master” handheld videogame as a gift, which Ben can’t use because his hands are bandaged. But then Johnny does something genuinely nice, giving Ben the real gift of an authentic Cuban cigar. Then Alicia shows up, forgiving Ben for missing their date, what with all that Dr. Doom stuff happening. Ben says he’s glad they finally have some time to spend together.

On the way back to HQ, Reed receives an alert, saying his latest experiment is nearing on completion. Reed says he’s investigating a possible link between the recent appearance of the Silver Surfer and the mysterious space anomaly that gave the FF their powers. (Keep in mind that Heroes Reborn is an alternate reality, so this is re-imagined version of our heroes’ origins). Theorizing that the FF’s powers originate in “another plane of existence,” or a “parallel world,” he had built a portal to another dimension he names the Negative Zone. 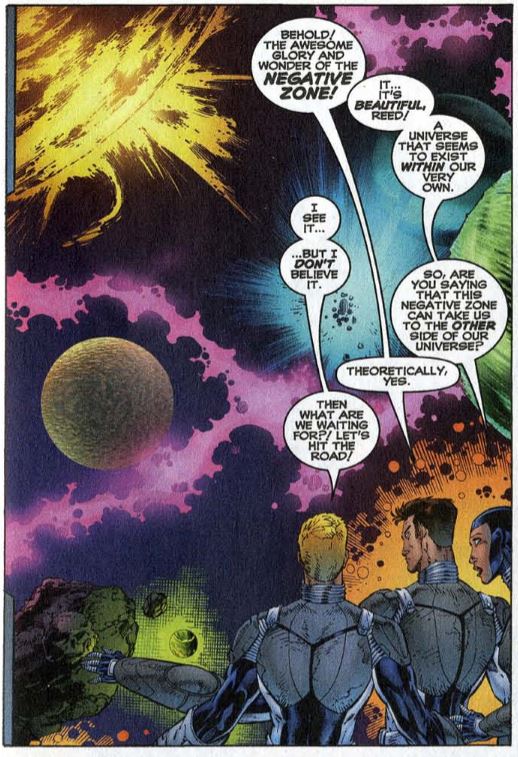 Reed, Sue, and Johnny don somewhat ridiculous-looking spacesuits for the journey into the Negative Zone. The board their ship, which I believe is merely this series’ version of the Fantasticar, and take off through the portal. After flying through the trippy-looking distortion area, they come across Blastaar the Living Bomb-burst, who’s just hanging out on a nearby asteroid, apparently. Blastaar easily destroys the Fantasticar. Just before he and the FF can fight, the Watcher appears, saying Blastaar’s senseless attack has made it necessary for him to intervene.

Then things get really weird. Reed finds himself transported elsewhere, only see Wolverine attacking an alternate universe version of Reed. Except that there’s no X-Men or mutants in Heroes Reborn, so Reed has no idea who Wolvie is. He then sees alternate versions of Ben and Johnny, as well as who we readers recognize as She-Hulk, Storm, and Rogue. Reed checks his “chronolog,” and deduces that he’s watching images from the past. Reed ponders how he has existed in two realities at once.

Then it’s Johnny’s turn, who has a vision of himself marrying Alicia instead of Ben. Sue’s vision is next, and is the most disturbing. She sees Franklin and his nanny Agatha Harkness. Sue instinctively suspects that Franklin is her long-lost son. Franklin runs past Sue and into his real mom, the Sue of another dimension. Then the Watcher reappears, introducing himself to the FF.

The Watcher says, “I have merely revealed to you a world that all of you already knows exists.” He says it’s up to the FF to restore this other world, and that the consequences could have a profound impact through the entire universe. The Watcher then teleports the heroes back to the Baxter Building, as if everything they just experienced never happened at all. Sue, however, is heartbroken after seeing a son she never knew.

Cut to outer space, where the Silver Surfer reunites with Galactus. The Surfer says that Earth is different from all other planets Galactus has harvested. He asks for further investigation. Galactus refuses, however, saying his hunger is too great. A disappointed Surfer can only say, “Very well, master.” On the last page, the Watcher speaks directly to the reader, saying he always watched and never interfered… until now.

Unstable molecule: Reed’s vision is a scene from the Fantastic Four vs. X-Men miniseries. Wolverine refers to Kitty Pryde, whom Reed was trying to help at that time. It’s not clear why this moment was chosen for Reed to relive out of all his memories, except that Wolverine sells comics.

Fade out: The Marvel Wiki approximates Sue’s vision taking place sometime after Fantastic Four annual #18. The FF spend that whole annual in space without Franklin, so I’m not clear why that comic in particular is singled out, but anything goes when you’re having an interdimensional time vision.

Clobberin’ time: Ben’s cigar is a relic of the past. Marvel’s ban on smoking started in 1990 when the company banned images of smoking in trading cards, and then in 2001 the company announced that characters would no longer smoke in the comics, with Wolverine, the Thing, Nick Fury, and Gambit being singled out by name. Later, in 2015, Disney executive Bob Iger announced that smoking would no longer appear in the Marvel Cinematic Universe.

Flame on: Johnny’s vision is of course from the wedding issue back in issue #300. That means the Alicia of the vision is really Lyja the Skrull in disguise, but this issue doesn’t seem interested in referencing that.

Fantastic fifth wheel: There’s no She-Hulk in Heroes Reborn, and yet Reed has no reaction to seeing her in her FF uniform. That Wolverine guy really does hog all the attention.

Four and a half: It’s possible that Franklin seen in Sue’s vision might be Franklin of the regular Marvel Universe, who created the Heroes Reborn universe with his reality bending powers. He runs right towards one Sue before going to the other, though, so you never know.

Commercial break: “She pressing charges? I get that a lot.”

Trivia time: Also in Heroes Reborn: Iron Man #6, an image of Onslaught appeared just as the heroes save the day, further confirming that Marvel was ready to wrap up Heroes Reborn a mere six months after it began.

Fantastic or frightful? The issue starts out promisingly, with a lot of great character work in the hospital scenes, and then a jaunt into the Negative Zone. But then it dawns on the reader that it’s all just an excuse for artist Jim Lee to draw Wolverine for a few pages in the hopes of upping sales. The two pages of Galactus and the Silver Surfer are the only real plot in the issue.

Next: Let’s everybody get Inhuman.