Reading the Fantastic Four comics from the start. We’ve all heard about Heroes Reborn and Heroes Return, but it turns out there’s a middle part of the trilogy, Heroes Reunited. That’s the crossover that puts a merciful end to Heroes Reborn, starting with this, volume 2 issue #12. 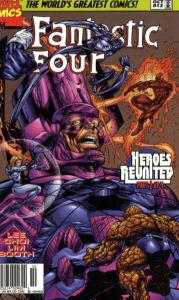 We begin in the Lateverian Embassy, where Dr. Doom arrives. His security robots welcome him and report on the FF’s fight against Terrax. Another robot tells Doom his “siphon suit” is ready. An aide reports to Doom that his chronal displacement device, which he got from a future version of himself a few issues back, has arrived and is being assembled.

Cut to Central Park, where the FF are facing off against three of Galactus’ heralds. There’s Terrax, now recovered from his fight against them last issue. He’s flanked by Firelord and new character Plasma. Ben wants to clobber, but Reed stops him and tries to negotiate. He urges the heralds not to let Galactus devour the Earth. Terrax refuses, and he attacks. The heralds put up a good fight, with Terrax shattering Sue’s force fields with his axe and Plasma extinguishing Johnny’s flame with her… cosmic water?!? 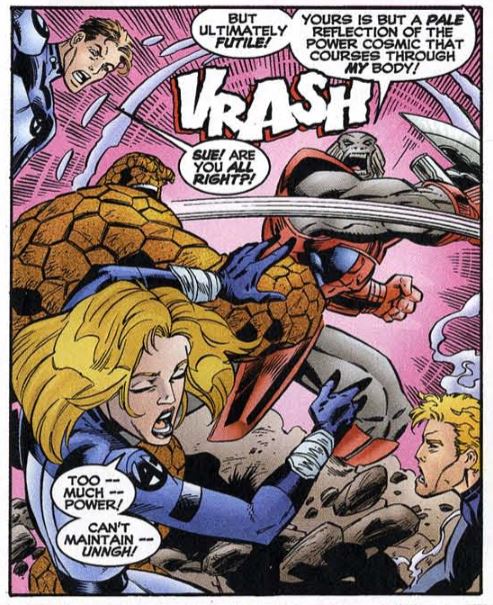 Sue then puts herself between Terrax and some civilians, risking her life for them. Terrax is about to slice n’ dice her with his axe, when the Silver Surfer flies in and saves her. Although he too is a herald, the Surfer has switched sides and says he won’t let the others harm his new friends. The Surfer says the FF showed kindness to him, and he survived the fight in Dr. Doom’s castle thanks to them. Before the conflict can continue, the heralds receive a summons from Galactus, and all four of them fly off. 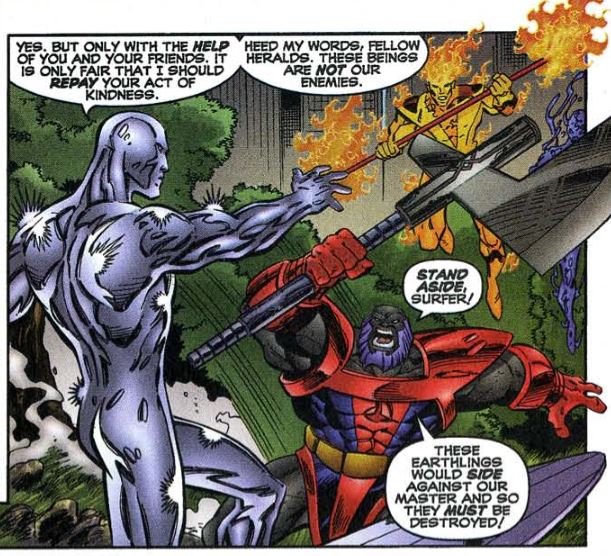 Before the FF can catch their breaths, they’re next approached by two S.H.I.E.L.D. agents, Dum Dum Dugan and The Countess. They demand the FF come with them right away. They’re then taken on board the S.H.I.E.L.D. Heli-carrier, where they’re met by Iron Man, Captain America and Nick Fury. Fury says a massive energy signature is headed for Earth and the four heralds are currently flying out to meet it. S.H.I.E.L.D. sends some probes toward the energy, only for them to be destroyed. Then Galactus’ ship appears, and the heroes wonder if it represents a friend or foe. 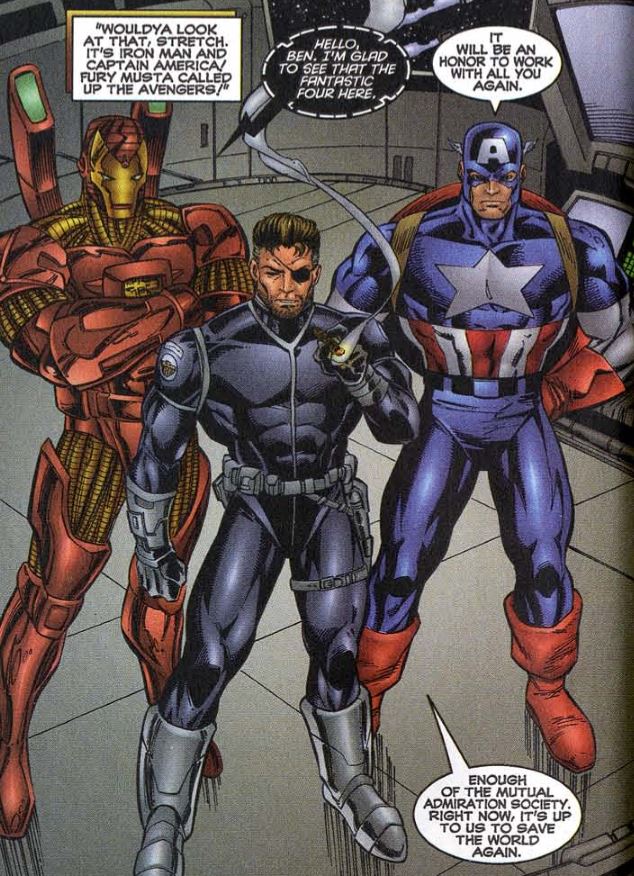 Aboard the ship, Galactus says it’s time for him devour the Earth, which he calls “Terra Prime.” The Silver Surfer hesitantly suggests that Earth be spared, but Galactus insists that his hunger be sated. In the Heli-carrier, Black Panther and Thor join the party, as Reed explains that everything the FF has encountered, such as the Mole Man’s caves, the Silver Surfer in Latveria, the Skrull who infiltrated S.H.I.E.L.D., and the Inhumans coming out of hiding, are all tied into Galactus’ oncoming arrival. Galactus’ ship opens up to reveal an alien device that splits up into multiple components, with multiple trajectories on Earth. Reed deduces that the devices are heading toward Attilan, Monster Island, and New York. 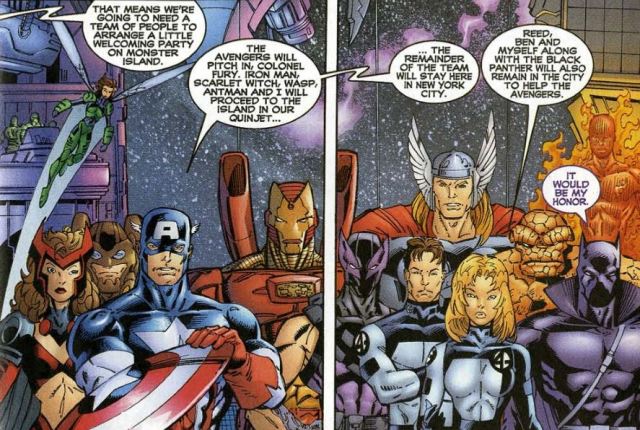 The heroes decide to split up, with Captain America and Iron Man leading the Avengers on Monster Island, while Thor and Black Panther will join the FF in NYC. (Attilan goes unmentioned during this part. Are we to assume that the heroes are trusting the Inhumans to handle it?) Reed complicates things further when he says he must stay behind on the Heli-carrier to monitor both teams. Before Sue leaves for New York, Reed asks her to marry him… and she says yes! 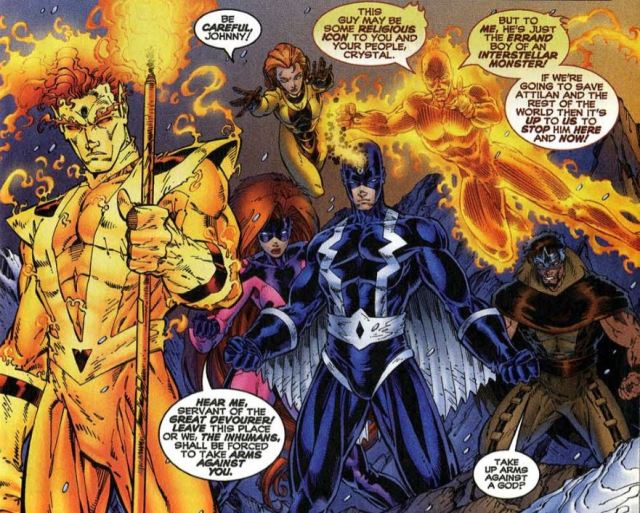 Then the story cuts to Attilan, a cut that’s so abrupt I thought maybe my comic was missing a few pages. Firelord is there attacking the Inhumans, and Johnny flies down from the sky to rescue Crystal. I turn the page and OOPS! The pages are out of order! Now Firelord arrives in Attilan with one of the three alien devices. The Inhumans believe Firelord is one of their ancient gods, but Johnny shows up to insist that he’s bad news. The device starts trashing the mountain, and the Inhumans fight Firelord. Black Bolt destroys the device with his powerful voice, while Johnny tells Crystal he’ll stay with her until the end, no matter what happens. 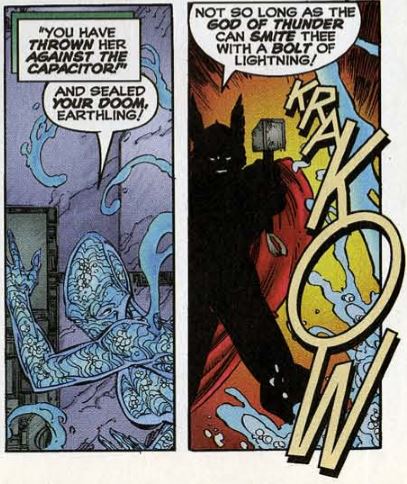 Then we go to Monster Island where the Avengers confront Plasma, only for the Mole Man to show up and declare them all as trespassers on his island. Also, look in the background and you can see Namor is here as well. Everybody fights, with Hawkeye defeating the Mole Man and Thor (wasn’t he part of the New York group?) zapping Plasma with lightning. The alien device is damaged and is about to implode. Namor carries the device down into the depths of the ocean so that the others are not harmed in the implosion.

Thor uses his hammer to teleport the Avengers to New York (he can do that?) where Galactus has arrived in person. The S.H.I.E.L.D. weapons can’t penetrate a force field around Galactus, and Terrax is going nuts fighting the FF. The Heli-carrier fires its plasma cannons at Galactus, only for Galactus to blow a hole in the Heli-carrier. Nick Fury orders everyone to evacuate the Heli-carrier before Reed can get a chance to fully test a “nullifer” he is hastily constructing. Fury forces Reed into an escape pod and sends him flying. Before the Heli-carrier goes down, Fury gets a message that another bogie is headed to Earth from space.

The Heli-carrier crashes into Galactus’ ship, destroying them both – and apparently killing both Nick Fury and the Countess. Galactus isn’t fazed, and instead telekinetically dismantles a bunch of New York skyscrapers and rearranges them into a new ship, and a new world-destroying capacitor. Reed reunites with the other heroes and catches them up to speed on how and why Galactus devours entire planets. Ben is ready for action, wanting to use Reed’s nullifier. The conference is cut short when Terrax attacks again, and he and Ben fight. Black Panther spots the Silver Surfer setting up the capacitor.

The nullifier works on Terrax, rendering him powerless and therefore vulnerable to Ben’s fists. When Ben tries the same trick on Galactus, though, Galactus is too strong, and the feedback throws the heroes for a loop. The nullifier nullifies the cosmic rays inside Ben, turning back into a human. Terrax comes to and wants to kill Ben, but Reed, Black Panther, and Thor step in to help him. Terrax then reveals that a fifth herald, Air-Walker, has secretly set up a fourth capacitor on Earth’s south pole. 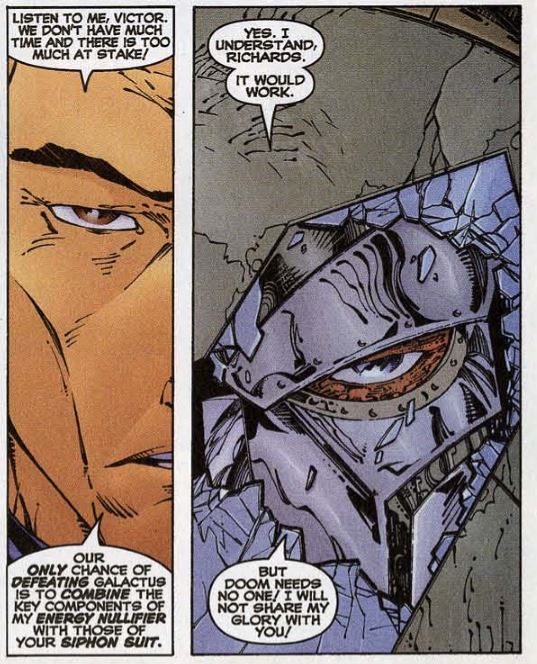 Silver Surfer decides he’s had enough, and he attacks Terrax again, this time fully siding with the heroes. Before we readers can even process this, Dr. Doom shows up in his new armor to siphon the Power Cosmic from the Surfer. It works, and the now-cosmically powered Doom turns his attention to Galactus. It doesn’t last, as Galactus swats Doom aside like a bug. Reed, however, says Doom’s new armor could nonetheless be the key to defeating Galactus. Reed talks to immobilized Dr. Doom, saying they must combine the nullifier and the siphon suit. Dr. Doom refuses, saying he’ll never share glory with Reed.

They’re too late, however. Galactus and Air-Walker activate the two capacitors. Reed sees Sue vaporize right before his eyes, and then Reed vanishes in front of Doom. Doom says the world is truly coming to an end, so he activates his chrono-displacement device. Then the last panel of the comic goes the distance and shows the Earth being completely destroyed.

Unstable molecule: Reed’s final words, declaring to Dr. Doom “May God have mercy on your eternal soul,” doesn’t seem very Reed-like, as he’s never been shown to be particularly religious. Much later, though, we will get a Heaven/Hell/afterlife story featuring Reed and Doom.

Fade out: Sue’s pregnancy is not mentioned in this issue, but it coming up last issue and Reed’s proposal in this issue are clearly tied together. Remember that Heroes Reborn is all taking place in a world created by Franklin’s reality-bending powers, could this be Franklin taking steps toward merging the Heroes Reborn universe with the Marvel Universe?

Clobberin’ time: In the original Galactus storyline, it was Johnny who went to space to recover the Ultimate Nullifier. In this version, Reed builds the nullifier as a backpack for Ben to wear with devices attached to his fists. Ben can nullify via punching!

Flame on: Johnny’s fight against Firelord only lasts three panels, and Firelord defeats Johnny easily. Maybe Johnny should have just beaten Firelord senseless like Spider-Man did in that one infamous Spidey story.

Fantastic fifth wheel: Crystal and Johnny are reunited, and Crystal is able to embrace Johnny while he’s flamed on. I guess that’s her elemental abilities at work.

Medusa gets defeated by Firelord pretty quickly, and not by his fire powers but by the blinding light he outputs.

Commercial break: Is this Screech’s comic book debut? And why is he dressed like Triplicate Girl from Legion of Super Heroes? 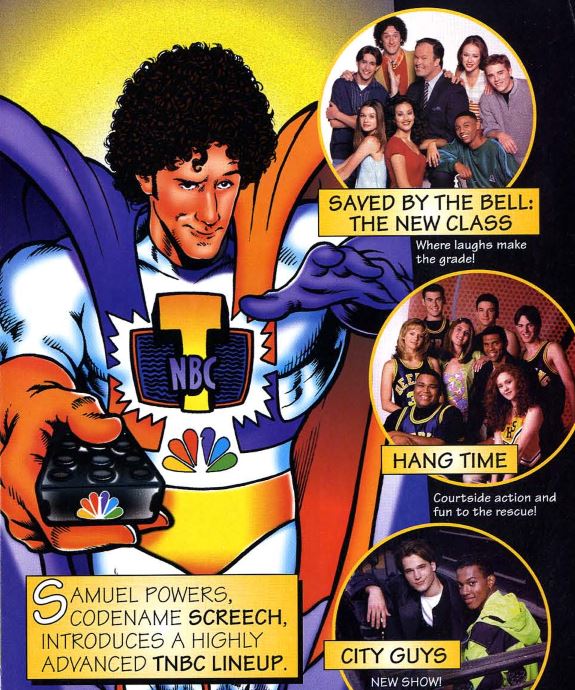 Trivia time: Who is this Countess character? That would be Contessa Valentina Allegra de Fontaine. In the regular Marvel Universe, she’s been a regular supporting character in numerous Nick Fury and S.H.I.E.L.D.-related comics. Recently, she was revealed to be working deep, deep undercover as a villain this whole time, and she became the new Madame Hydra. We’ll never know if she was also undercover in the Heroes Reborn universe, as the Marvel Wiki states that she died aboard the Heli-carrier in this issue.

Fantastic or frightful? An exhausting issue with tons of characters, action, and plot. It’s perhaps a little too overstuffed, though, making it hard to keep track of which characters are where and what is happening. On the other hand, the creators know Heroes Reborn is ending, so that gives them freedom to go big and do thing, like, you know, destroy the Earth. 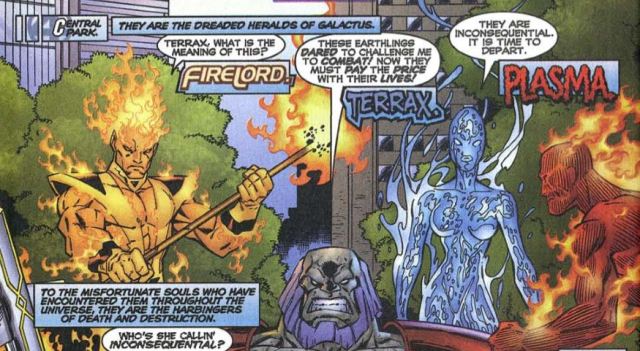 Next: They’re heroes, not zeroes.