Rewatching the Universal Monsters! The ones on the Blu-ray box, at least. The series crosses over with WWII propaganda in 1942’s The Invisible Agent. Buy war bonds, etc.

Here’s what happens: Frank Griffin, grandson of the original Invisible Man, still protects the invisibility formula. When he’s discovered, he’s recruited to help the war effort. He skydives into Germany where he outwits Nazis, finds romance, and saves the day.

Monster!: Allegedly, the studio mandate during the war years was depict the Nazis as stupid and incompetent, so there’s a lot of the “bumbling villain” trope throughout the movie, leaning way more into comedy than action or horror.

Also a monster!: Although most of the villains are slapstick clowns, the great Peter Lorre is on hand to supply some real menace. His character is supposed be Asian (what the heck, old-timey Hollywood?!?) but Lorre downplays that instead sticks to his “creepy Peter Lorre” act, for which we should all be grateful.

Our hero: Frank Griffith starts the movie as a nondescript shopkeeper, but once he’s the Invisible Man, he becomes the “charming rogue” stereotype, having fun with his invisibility and goofing around before learning to take the mission seriously.

Hapless humans: Ilona Massey plays the feisty love interest for the Invisible Man, and they do the romantic comedy banter thing nicely. Their Moonlighting-style back-and-forth wordplay is the highlight of the movie.

Thrills: The filmmakers continue to up their game in the invisibility special effects department. Instead of the bandaged-up look, this Invisible Man covers his face with white cream, with some nifty face-floating-in-air effects. Later, the Invisible Man grabs an envelope, carries it through a window, down a ladder and onto the street. It’s a huge set piece where we follow his actions by following the letter.

Laughs: As noted above, there’s a lot of slapstick whenever the villains are on screen. Heiser, the main villain, has a running gag about food spilled on his uniform, and everyone humiliating him about it. 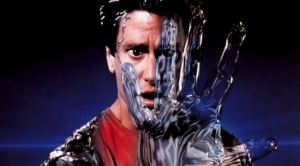 Thoughts upon this viewing: The Nazi talk and the old-fashioned racism make this an unpleasant watch, so that I just can’t recommend it. It’s too bad, because the movie could have been a lot more fun otherwise.