DuckTales rewatch – Don’t Give Up the Ship

Rewatching DuckTales! Is it a whimsical children’s cartoon? Is it some creepy greed-is-good brainwashing? Is it something more? Let’s find out together, starting with the first episode, “Don’t Give Up the Ship.”

Here’s what happens: Donald Duck is joining the Navy because he wants to see the world. He leaves his three nephews in charge of their new legal guardian, his rich Uncle Scrooge. Scrooge and the nephews have trouble getting along, while the ruthless crooks the Beagle Boys bust out of prison thanks to the mysterious El Capitan. He wants the Beagles to steal an antique model ship from Scrooge’s trophy room. Scrooge and the nephews work together to stop the Beagles, wrecking Scrooge’s candy factory in the process.

Humbug: The episode begins with what is arguably the series’ most iconic image, Scrooge swimming in his money. Throughout the episode, he’s in real “rich jerk” mode, shooting down charities and complaining about the poor.

OK, real talk. If there is any series-long story arc to DuckTales, it’s that Scrooge starts out obsessed with his own wealth, but thanks to his relationship with his nephews, he learns that his family is more important than his fortune. That’s my hypothesis, at least. Will this rewatch prove me right or wrong? We’ll see.

The nephews are initially excited to move into Scrooge’s mansion, saying “We get to have our own room,” which makes me wonder what kind of living conditions they had with Donald.

Foul fowls: Which Beagle Boy is which? Big Time is the little one, who is the brains of the group. Bouncer is the big one with the missing tooth, who is the muscle. Burger is the Curly-from-the-Three-Stooges one, who contributes nothing to the group as far as I can tell. While they’re comedic villains, El Capitan’s presence raises the stakes, as he is more of a genuine menace.

Down in Duckburg: Scrooge’s money bin building also houses his business office and his trophy room. The nephews share a bedroom/apartment in the attic of Scrooge’s mansion. We’re told that Scrooge owns numerous businesses, including a candy factory seen in this one.

Reference row: DuckTales as a whole is a modernization as the Uncle Scrooge and Donald Duck comics of the 1940s through the 1960s, notably the ones drawn by the great Carl Barks. Before the names of artists were published, fans knew Barks merely as “the good ducks artist,” a phrase that Barks has been known for ever since.

Thoughts on this viewing: This one is packed with information, establishing not just the “world” of the show, but also telling a whole character arc of Scrooge and his nephews learning to live with each other. But will the carry through to all 70-something episodes? That’s the question. 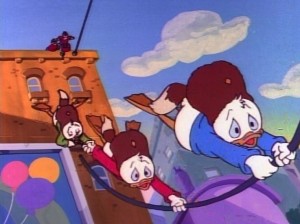 Next: Heart of flint.