DuckTales rewatch – Where No Duck Has Gone Before

Rewatching DuckTales! We’re blasting off for space and the first of the show’s many alien encounters in episode 8, “Where No Duck Has Gone Before.” 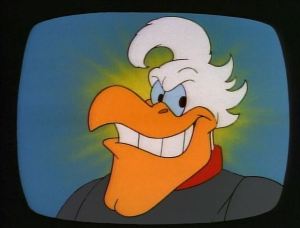 Here’s what happens: Scrooge’s nephews and their friend Doofus are excited about their favorite sci-fi TV show, Courage of the Cosmos, starring Major Courage. Scrooge, meanwhile, works out a deal with some Hollywood folks for ownership of Duckburg Studios, where Courage of the Cosmos is filmed.  He, the kids, Launchpad, and Gyro take the tour. To save the studio, Scrooge insists on sprucing up the show with a realistic-as-possible spaceship.

Fearful for his job, Courage hopes to butter up to the kids, while also developing a rivalry with real-life pilot/adventurer Launchpad. Courage throws Launchpad off the set, only for him and the boys to discover the realistic ship is… a real spaceship! They take off for space, with Launchpad stowing away. The kids and Courage think they’re acting on the TV show, while Launchpad flies the ship for real.

The plot is further complicated when the ship encounters an alien spacecraft. The aliens, led by Commander Kronk, is plotting to destroy the Earth and use it for fertilizer (!). Courage flees with his ship, so Launchpad and the kids fight the aliens and take over their ship. They pursue Courage, get back their ship, and get back to Earth. Scrooge later converts the dilapidated studio into a space museum, with Major Courage as a tour guide. 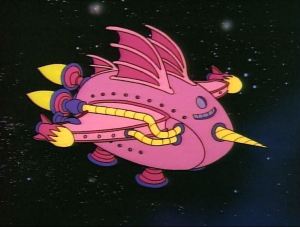 Junior Woodchucks: By the end of the episode, Huey, Dewey, and Louie no longer enjoy Major Courage’s show, dismissing it as “kids’ stuff.” 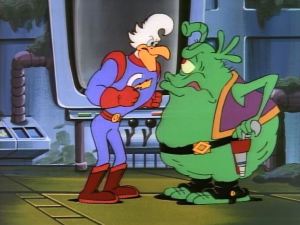 Fasten your seatbelts: This is a Launchpad-centric episode, about his real courage in the face of danger, as opposed the actor’s fake bravado. But Launchpad is still Launchpad. When the aliens upload his brain to their computer, it makes their ship go haywire and they can’t find their way to Earth. 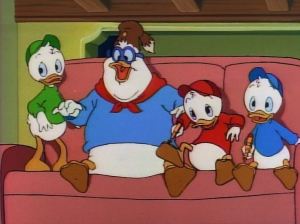 Do the Doo: This is the first appearance of the nephews’ weirdo friend Doofus. He’s given no proper introduction. He’s just some friend of theirs, and that’s enough. 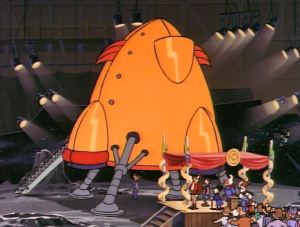 Best brains: Gyro confuses “realistic” with “real” and builds a functioning spaceship in one week. But he still manages to outfit it with cameras so the TV crew on Earth can follow the action. 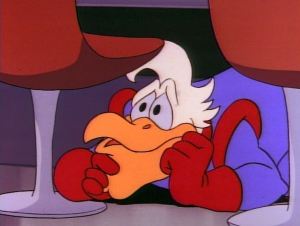 Foul fowl: Major Courage isn’t so much evil as he is delusional. All his talk of manliness and heroism merely a mask for his own cowardice. The aliens, meanwhile, are the most pure evil characters we’ve seen yet on DuckTales. The Disney Wiki says they never return, which is too bad. They could have made for great recurring baddies. 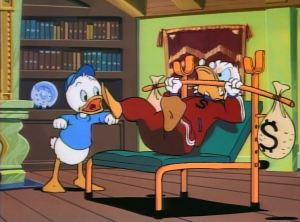 Down in Duckburg: The episode opens with Scrooge and the boys working out, but they’re not in a gym. They’re using makeshift workout gear while inside Scrooge’s office in the mansion. We see the office is adjacent to the living room, where the kids watch their show on a big screen TV.

Reference row: There are sci-fi references galore, most notably Star Trek and ‘50s ship-models-on-strings movies. Listen closely, and you hear the composer sneak some of the Tron soundtrack into the episode. 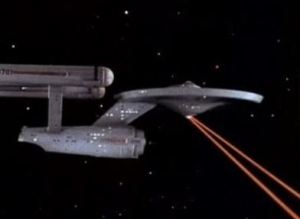 Thoughts upon this viewing: in terms of worldbuilding, we’ve just had first contact with incredibly dangerous intelligent alien life, and everybody brushes that off like it’s just another one of their treasure-hunting romps. But, as a meta poking-fun-at-TV episode, it’s pretty fun, and a lot of Major Courage’s goofs are genuinely funny. 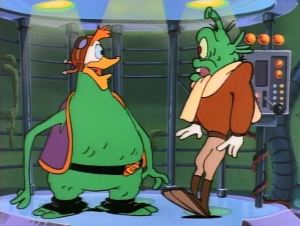