Rewatching DuckTales! Everybody dance the robot as we check out episode 9, “Armstrong.” 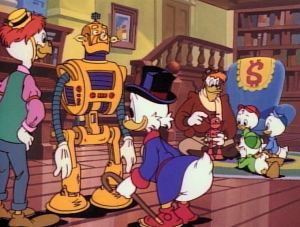 Here’s what happens: After Scrooge’s personal train (!) is blocked by an avalanche, inventor Gyro Gearloose saves the day with his new robot Armstrong, which can apparently to do anything asked of him.

Scrooge puts Armstrong to work around the house. Launchpad doesn’t like the robot, leading to a piloting contest between him and the robot. Armstrong wins when Launchpad fails to cross the finish line. Scrooge tells Launchpad to take a long vacation.

Scrooge starts replacing all his employees with Armstrong, who single-handedly does all their jobs. Armstrong gets out of hand, abducing Scrooge and Gyro and helping himself to the inside of Scrooge’s money bin.

Armstrong starts hacking technology all over the world, while Huey, Dewey, and Louie investigate. They recruit Launchpad to fly in on his can’t-be-hacked antique biplane and save the day. Launchpad shorts out Armstrong with good old-fashioned water, and Scrooge admits Armstrong’s efficiency wasn’t everything. 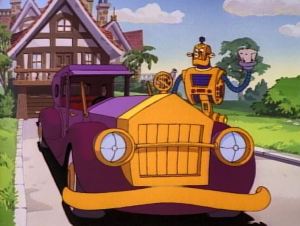 Humbug: It’s left up to the imagination as to where Scrooge was going in his private train, or why his personal quarters were filled with bags of gold nuggets. 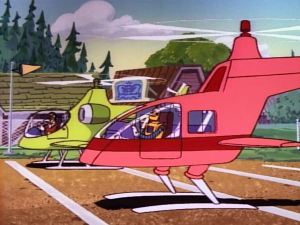 Junior Woodchucks: While the nephews are generally considered to be one personality, this episode makes some small effort to give them individual quirks. Dewey is the brains, figuring out the tech. Huey is more of a pragmatic problem-solver and all-around leader. Louie is the hothead, ready to jump into the fight.

Fasten your seatbelts: The episode starts with Launchpad using his plane to put out a forest fire, establishing that he does this hero stuff even when not working with Scrooge. We also briefly glimpse Launchpad’s home, which looks like an attic where his bed is the only piece of furniture. 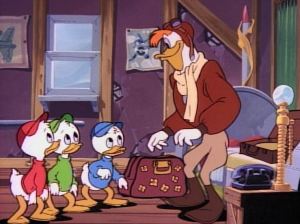 Maid and maiden: Webby appears in the background in one shot, next to an old lady we’ve never seen before. Could this be an earlier, unused character model for Mrs. Beakley?

Best brains: Gyro appears to have built Armstrong for his own amusement, but then has no problem with Scrooge wanting to mass-market Armstrong robots for the entire country. 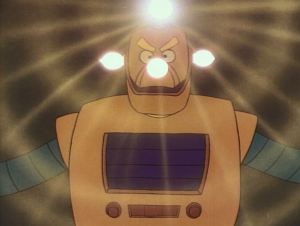 Foul fowls: No reason is given for Armstrong to turn evil so suddenly. He just does. If anything, it’s exposure to Scrooge’s wealth is what does it. 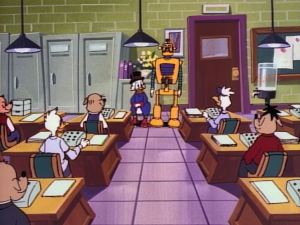 Down in Duckburg: We see for the first time that Scrooge’s money isn’t just a big silo, but it has business offices inside it. In this case, it’s a room full of accountants working for Scrooge. Scrooge also has an upstairs office adjacent to the money bin door. Further, Armstrong is seen on the floor of the money bin when counting Scrooge’s money, further confusing the interior of the building.

Reference row: I cannot find this confirmed anywhere, but Armstrong is most likely named after famed astronaut Neil Armstrong. 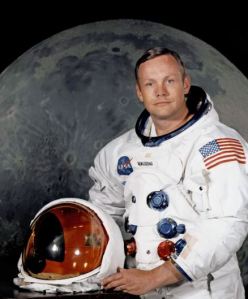 Thoughts upon this viewing: Robots-run-amok stories have been around as long as there’s been science fiction, and this one doesn’t bring much new to the trope. What makes this episode stand out is all the airplane and helicopter action. This is where the animators really went for it, with lots of dynamic camera angles and a real sense of movement. 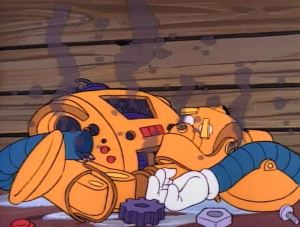 Next: The bigger they are…