Ten cent movies: The Eyes Behind the Stars

A while back, I spent a whopping $5 on this 50-movie set, Sci-fi Invasion. That adds up to 10 cents per movie. Now it’s time for 1978’s The Eyes Behind the Stars. (How can they see anything from back there?) 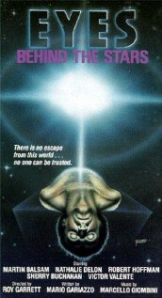 Here’s what happens: A photographer is abducted by aliens while taking pics of a model out in the woods. Police launch an investigation into what happened to him.

Speculative spectacle: It’s a proto X-Files with all the alien abduction stuff, except that the aliens look more like silver-suited Martians from a 1950s sci-fi flick.

Sleaze factor: Very little. We spend most of the movie with the cops, who are all stuffy and formal while on the case.

Quantum quotables: Cop #1: “It’s very curious, inspector. This dog’s alive. It appears to be blind, sir.” Cop #2: “Yes, it certainly is odd. Well, leave me alone with him.”

(Who’s the odd one here, inspector?)

What the felgercarb? It’s another in a long line of “Italians pretending to be Americans” movies, complete with astonishingly bad dubbing (Half of the time, the movie is in England, the other half in America).

Microcosmic minutiae: Once the military gets involved with the case, one character is addressed only as “Wing Commander,” and suddenly I’m wishing I was watching that movie instead.

Worth 10 cents? Just dreadfully boring. The guy is abducted by aliens in the first few minutes. The rest of the movie is people investigating his disappearance, even though we in the audience already know what happened to him. Totally NOT worth the dime.

Like movies? Like to read? Check out my book, CINE HIGH, now available for the Kindle and the free Kindle app.