A while back, I spent a whopping $5 on this 50-movie set, Sci-fi Invasion. That adds up to 10 cents per movie. Today we’re blasting off to Japan for 1968’s Invaders from Space, a didn’t-translate-well tribute to total randomness.

Here’s what happens: More like here’s what I think happens: Aliens are invading Earth, so a second group of aliens who like something from a bad Teletubbies episode sends a superhero, Starman, to Earth to stop them. Then, a bunch of little kids get involved and everybody ballet dances. 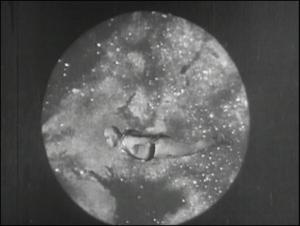 Speculative spectacle: The villains are iguana-men with radioactive breath that lets them mind control people (Radioactive mind control? Just like Puppet Master), and the good guy is a high-flying superhero who fights them with slow-mo ballet moves. There’s also a deadly plague afflicting humanity, which the film conveniently forgets about for long stretches of time.

Sleaze factor: None. The movie’s going for a kid-friendly vibe.

Quantum quotables: The opening narration states, “Two billion light years away, on the Emerald Planet of the Mophead galaxy, friendly creatures are aware that the planet Earth is in danger. They have received an urgent message that the salamander-men of the planet Kulamon, deep in the Mophead galaxy are planning to attack and destroy Earth. Here, the Emerald Men confer on what must be done. They are aware that the atomic destruction of Earth would contaminate their own atmosphere with radioactivity. And so they reason in order to save themselves, they must save Earth from the impending Kulamonian invasion.” (Now imagine listening to 90 minutes of narration like this, and you get the idea.)

What the felgercarb? When the first evil salamander-man is revealed it looks remarkably similar to the famous reveal of the Joker in Tim Burton’s Batman. Coincidence?

Microcosmic minutiae: It’s no wonder this thing is so nonsensical. It was originally parts three and four of a matinee serial, Super Giant, hacked up and edited into this stand-alone “movie.” The two chapters, by the way, were originally titled Earth on the Verge of Destruction and The Mysterious Spaceman’s Demonic Castle, because what else could they possibly be called?

Worth 10 cents? The movie’s first half hour is filled with so much goofball weirdness that I was ready to declare this the greatest so-bad-it’s-good movie of all time. Then, at around the 30-minute mark, the little kid characters are introduced, and the whole thing becomes slow-paced, boring and tedious. Watch the beginning and skip the rest.