Reading the Fantastic Four comics from the start. When we last left our heroes, the Hulk was wrecking New York City, enraged that Captain America had taken his place on the
Avengers. The Thing fought back, and got the crud beaten out of him by the
Hulk. Meanwhile, Reed has been stricken by a strange ailment and is bedridden.
Now, in issue #26, the Avengers are about to join in on the fun.(Note: I’ll be doing a bunch of these FF posts throughout February to make up for weeks I’ve missed. If all goes according to plan, that’ll put the blog on track to reach Galactus at the one-year mark!) 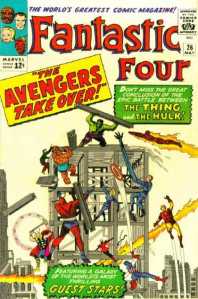 The issue begins with the Thing fulfilling his promise at the end of the last one, to keep on fighting no matter what, as we get two more pages of him and the Hulk pounding on each other. In the hospital Reed wants to join the fight, but he must be sedated because of his weakened condition. Sue gives the doctors the serum Reed was working on when he got sick, in the hopes they can be turned into an antidote. Johnny is also hospitalized after the Hulk smashed him last issue. Although still hurting and covered in special asbestos bandages, Johnny rejoins the fight and we get more pages of him and Ben giving the Hulk everything they’ve got, and the Hulk giving back. The army moves and fires on the Hulk, which does nothing of course.

The Hulk takes off, hiding out in the subway tunnels, where he renews his commitment to find and destroy the Avengers. He makes his way to Tony Stark’s New York mansion, and the Avengers are inside, waiting for him. The lineup: Captain America, Iron Man, Thor, Wasp, Giant Man, and squeaky-clean teen sidekick Rick Jones. Squeaky-clean teen sidekick Rick Jones wants to reason with the Hulk, but the Hulk immediately attacks him (sweet), and the Avengers all fight back at once. 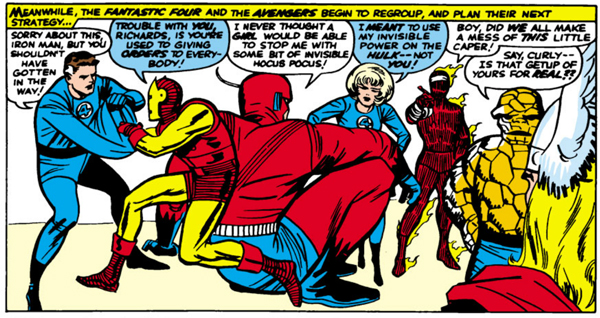 At the hospital, the antidote works, and Reed is cured. He rejoins the others and the FF is a team again. The find the Hulk on a rooftop with squeaky-clean teen sidekick Rick Jones. The Wasp is inside Hulk’s ear, driving him crazy with the buzzing sound of her wings. Cap jumps in, and moves so fast that the Hulk can’t get a grip on him. The rest of the FF and the Avengers show up, but keep getting in each other’s way. The Hulk leaps away with squeaky-clean teen sidekick Rick Jones, barely escaping a toss from Thor’s hammer, which the Hulk describes as “the one thing I fear.” The FF and the Avengers both insist on going after the Hulk on their own, until Thor and the Thing become the voices of reason, suggesting everybody work together.

Everybody finds the Hulk and squeaky-clean teen sidekick Rick Jones at a construction site, and it’s time for seven pages of non-stop fighting! Iron Man uses his “magnetized repellant,” and has to be saved by Thor. Johnny tries trapping the Hulk in a ring of fire, and he has to be saved by Reed. Cap sends a wrecking ball after the Hulk, and saves himself with all of his cool moves. There’s a funny bit where Giant Man alternates between shrinking and growing so fast that the Hulk doesn’t know what’s going on. He gets rescued by the Wasp. Finally, squeaky-clean teen sidekick Rick Jones gets close enough to the Hulk to toss a gamma radiation-treated pill into the Hulk’s mouth, which the Hulk swallows. Giant Man, who, remember was until recently Ant-Man, orders an army of ants to crawl all over the Hulk. The Hulk jumps into the nearby river to get the ants off, after which he transforms back into a human and floats silently away. 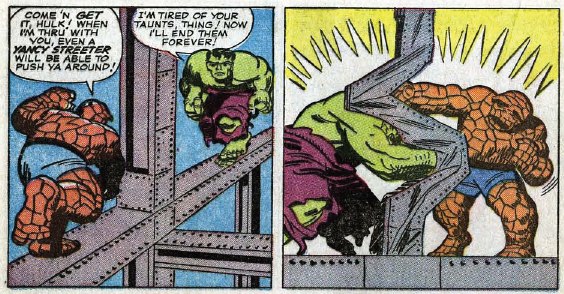 Squeaky-clean teen sidekick Rick Jones feels betrayed, as he thought the Hulk was his friend. Cap says it’s hard to lose a partner, referencing his lost pal Bucky, because Cap always references his lost pal Bucky. The FF and the Avengers agree to be allies from here on out, and will help each other out if need be.

Unstable molecule: So Reed’s mysterious illness really was caused by his messing with strange chemicals in his lab? And some random doctor comes up with the cure? Not much of a reveal.

Fade out: Aside from providing the doctor with Reed’s serum, Sue doesn’t do much in this issue. Giant Man gets trapped in one of Sue’s force fields when she tries to use it on the Hulk.

Clobberin’ time: Ben continues to be the go-to guy when it comes to Hulk bashing, even when Thor and Iron Man are standing by.

Flame on: I don’t know why Johnny thinks creating a circle of fire around the Hulk will have any effect. He looks pretty badass done up in his fireproof bandages, though.

Trivia time: This issue leads into Avengers #5, where the Hulk reemerges from hiding, complicating matters as the Avengers try to fight him as well as a bunch of super-evil lava men.

Fantastic or frightful: Another “all they do is fight” issue. It’s interesting that the Hulk is flat-out the villain this time, not manipulated by some real villain or somesuch. With so many characters running around, there’s little room for character development, but it’s nonetheless exciting to see so many classic Marvel characters interacting in one story.