Ten cent movies: The Brother from Another Planet

A while back, I bought this 50-movie set, Sci-Fi Invasion, for five bucks. That adds up to ten cents per movie. Unlike others on this set, 1984’s The Brother from Another Planet has real actors, real production value and a real director. 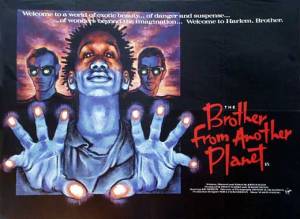 Here’s what happens: An alien, identified only as “Brother,” crash lands on Earth just outside New York City. He makes his way to Harlem to start a new life for himself. Unfortunately, he runs afoul of some drug dealers and is pursued by mysterious men in black.

Speculative spectacle: Our alien is mute, which definitely puts him in observer mode as he interacts with humans. He has some limited psychic powers, but what really makes him alien is his big ol’ hobbit feet. 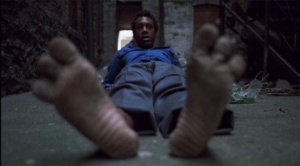 Sleaze factor: The movie starts out light and funny, with some slightly E.T. style antics, but with an inner city twist. As night falls, though, we’re plunged abruptly into a world of streetwalkers and drug dealers. Who, exactly, was the target audience for this?

Quantum quotables: “Walter, my man, you’re a space shot. Cruisin’ the stratosphere!” – My favorite character, Fly, says all kinds of stuff like this while playing the ‘80s-era coin-op video game inside the bar.

What the felgercarb? Because Brother doesn’t speak, this somehow has everyone else opening up to him, with big dramatic speeches about how tough life is. Obvious social commentary is obvious.

Microcosmic minutiae: Lots of talent in this one: The movie was written and directed by John Sayles, who’s had a long and varied career in the movie biz, crafting great films such as Passion Fish and Lone Star. Joe Morton plays the Brother, and he too has had a successful acting career, most famously appearing in Terminator 2 and Eureka, among many other roles. Character actor David Straithairn plays one of the men in black, and he too has had a huge career of mostly dramatic roles. An impossibly young Fisher Stevens appears as a card shark Brother encounters on the subway.

Worth ten cents? The plot often takes a back seat to the philosophizing, so don’t expect a lot of chases or special effects. Still, it’s worth seeing, as the whole thing is drenched in metaphor and discussion prompts. It might not be the best movie on this set, but it’s probably the smartest.