A while back, I bought this 50-movie set, Sci-Fi Invasion, for five bucks. That adds up to ten cents per movie. Horror High had the slasher movie formula down pat, which is impressive because it was made in 1974, the same year as Black Christmas and Texas Chainsaw Massacre, and a whopping four years before Halloween. So why isn’t it considered a genre landmark? 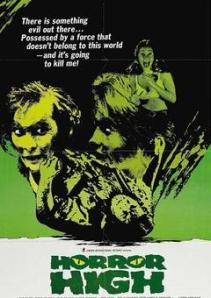 Here’s what happens: Vernon is a typical high school nerd, more interested in his science experiments then in gym. He’s mercilessly bullied by both his peers and his teachers. Too bad for them that Vernon is murderous evil, and he’s got some mad science brewing.

Speculative spectacle: Vernon’s experiment is a variation on the ol’ Jekyll and Hyde formula, bringing out monstrous tendencies – mental and physical – in his test subjects. This includes his pet guinea pig, and then himself. 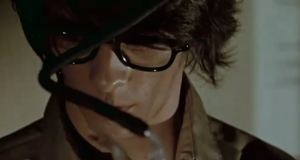 Sleaze factor: Don’t like violence against animals? Too bad, because one of the first things Vernon does in the movie is dump the school janitor’s cat into a vat of sulfuric acid! (Now I’m imagining Harry Potter doing this to Mrs. Norris.)

Quantum quotables: Vernon: “Human became the only animal with the ability to choose between good and evil, yet he deliberately picks evil.” Clueless girl: “Not everyone’s like that, Vernon. You’re certainly not like that.” 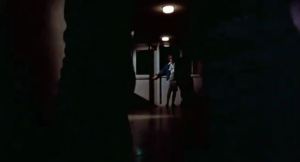 What the felgercarb? The cops use a department store mannequin in their crime scene reenactment. I don’t think Dexter Morgan would approve.

Microcosmic minutiae: The internet is trying real hard to convince me that the 1987 meta-horror spoof Return to Horror High is, in fact, a sequel to this one. I don’t buy it. Aside from the high school setting and, obviously, the title, the two films have zero in common.

Worth ten cents? This isn’t that great of a movie, but it’s among the very first of the slasher subgenre, using a lot of the tropes that later films get credit for inventing. For that reason, it deserves “undiscovered gem” status. Fright movie fans should definitely give it a look.