Re-reading the Fantastic Four comics from the start. When you have a superhero or group of superheroes who’ve had a lot of successes, it becomes a challenge to come up with new threats for them to face. Hence this issue, which attempts to have the FF meet their match once and for all. 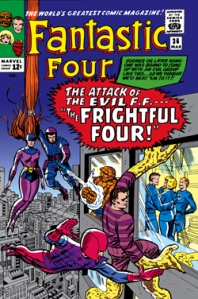 It begins with a press conference, as Reed and Sue announce their engagement to a bunch of reporters. It’s all very lovey-dovey, but there’s some laughs to be had as the Yancy Street Gang sends a flower-bomb (!) to surprise our heroes.

Time to meet our villains. First is Paste Pot Pete, who commits crimes with his high-tech glue gun (I swear I’m not making this up). He’s joined by Spider-Man villain Sandman, who can turn into powerful waves of sand, and the Wizard, who can manipulate gravity. A flashback ties together continuity, showing how the Wizard survived his apparent death after his last appearance in Strange Tales #118. Basically, Sandman and Pete were in the midst of a jail escape when the rescued the Wizard, and the three decided to team up. The Wizard then reveals there’s a fourth member of their team, Madame Medusa. She’s an amnesiac he rescued from a plane crash on a small Mediterranean island. He power, the Wizard says, is her “unconquerable hair!”

There’s more comedy antics at headquarters as Sue has a crowd of followers fussing over her hair, dress, and engagement gifts, while Johnny prepares fireworks for the wedding. Elsewhere, the newly-formed Frightful Four meets, as the Wizard proudly proclaims he’s renaming himself the “Wingless Wizard.” (He’s been hanging out with Paste Pot Pete too long.)

At the engagement party, it’s a Marvel continuity-a-thon, as the X-Men and Avengers are all present. A gloved hand is seen swiping a piece of cake – this is supposed to be Spidey, right? Later that night, the Frightful Four lands their flying saucer (where’d they get that?) on the Baxter Building roof and they sneak inside surprisingly easy. They take out the Thing first, gluing his hands together and knocking him out with the Wizard’s “sleep spray.” Reed and Sue fight back, but Reed ends up glued to the floor, and Sue gets tied up in Medusa’s hair. Elsewhere, Alicia is hiding out inside the FF’s kitchen (wait, isn’t the middle of the night? What’s she doing there?). She gets a hold of one of FF’s flare guns and fires it into the sky.

Across the city, Johnny is working on a sweet hot rod when his buddies tell him about the flare. As he flies into action, the Wizard attaches anti-grav discs to Reed, Sue, Ben, and Alicia, so they’ll float upward into space, killing them. (Dang!) Johnny forces the Wizard into the flying saucer and threatens to burn the Wizard if he doesn’t rescue Johnny’s teammates. (Harsh, Johnny.) They’re saved, but the other three Frightful-ers pursue, having stolen the FF’s pogo plane. The two ships chase each other around, and Sandman jumps outside the plane to attack the saucer… in space. With him out of the picture, the two ships crash in a forested area.

While invisible, Sue steals Paste Pot Pete’s gun, and without it, he’s defeated. (Pete you’re pathetic.) She then uses the glue gun to incapacitate Medusa’s hair. While this is happening, the Wizard rigs his ship to explode, and he and Sandman escape in the blast. Our heroes are left to wonder if they’ll ever encounter their four counterparts again.

Unstable molecule: In space, Reed is able to stretch into a balloon-like shape around his teammates, trapping air inside himself so they can breathe. Nice trick.

Fade out: Sue uses her force fields offensively during the fight, basically creating two invisible cannonballs to knock out Pete and Sandman.

Clobberin’ time: Ben sleeps through most of the issue, but has a great line after the FF has captured the Wizard, “Step lively there, cuddles, this is the end of the line!”

Flame on: This issue is a showcase for Johnny, as he fights the entire Frightful Four on his own, and then rescues his teammates from certain death.

Trivia time: The Wizard, the Sandman, and Paste Pot Pete had previously fought the Human Torch in his solo adventures in Strange Tales, which explains why they hate the FF so much in this issue. Pete will get a cooler name the next time we see him, but it won’t help. His status as “lame joke hero” will last forever.

More notably, this is the first appearance of Medusa, who’ll go on to have all kinds of adventures in the Marvel Universe, becoming a queen of the Inhumans, and even a member of… the Fantastic Four.

Fantastic or Frightful: I love the idea of an alternate foursome to square off with our heroes, but these four goofballs just don’t cut it. The Frightful Four is often thought of as joke villains, and won’t really become an equal/alternate to the FF until their reimagined during Mark Waid and Mike Wieringo’s landmark run on the title years later.

Next week: The final frontier…