A while back, I bought this 50-movie set, Sci-Fi Invasion, for five bucks. That adds up to ten cents per movie. Next up is the 1980 space romp Galaxina. 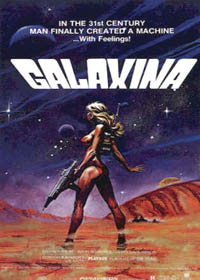 Here’s what happens: It’s the distant future. The crew of the starship Infinity travels the spaceways. We’ve got the boisterous Captain Cornelius, the cigar-chomping Sgt. Thor, and the Cowboy-wannabe Pvt. McHenry. Also along for the ride is girl robot Galaxina. Thor decides he’s fallen for Galaxina, so she is reprogrammed to love. Hilariousness ensues.

Speculative spectacle: This is intentionally a comedy, right? If so, it’s a droll one, so droll that I’m more bored than amused. Definitely of its era, the movie contains references (rip-offs?) of Star Wars, Star Trek, Alien, and more. It’s a hodgepodge of cheesy post-Star Wars sci-fi.

Quantum quotables: Villain: “The Blue Star… is mine!” Galaxina: “Get stuffed.”

What the felgercarb? The Alien spoof scenes give birth to a rather adorable alien monster puppet.

Microcosmic minutiae: Want more? In 1992, twelve years after the movie was made, Aireel Comics produced a four-issue Galaxina comic book, which continued the adventures of the Infinity crew. In the comic, Galaxina was a redhead.

Worth ten cents? It’s not funny enough to be comedy, it’s not sexy enough to be erotica, and it’s way too dumb to be sci-fi. This one should be schlocky fun, but I was just bored the whole time. Spend your ten cents elsewhere.