A while back, I bought this 50-movie set, Sci-Fi Invasion, for five bucks. That adds up to ten cents per movie. The starched-shirt conservatism of the 1950s comes to an end with all the sex and violence in 1959’s The Manster.

Here’s what happens: Larry, an American journalist in Japan, makes friends with a local doctor, not aware that the doc is up to some mad science, with a basement full of half-human monsters. The doctor drugs then experiments on the unsuspecting American, transforming him into a half-man, half-monster… a manster!

Speculative spectacle: At first, Larry seems to be experiencing the ol’ Jekyll and Hyde thing, with the experiments affecting his personality. Then, an eyeball sprouts on shoulder, growing into a second head, and finally into a separate, evil Larry.

Sleaze factor: The first shot of the movie is two women skinny-dipping, followed immediately, by a bloody monster attack. Later, our American hero has no problem romantically pursuing every Japanese lady he meets, even though he has a wife waiting for him back him back home.

Quantum quotables: Larry: “I don’t know what I like better, Japanese Sake, or Japanese geishas.” Doctor: “We have plenty of both here.” 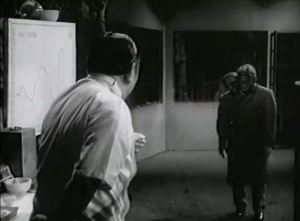 What the felgercarb? The mad doctor’s secret lab is located inside an active volcano. How does that work, exactly?

Microcosmic minutiae: This movie is allegedly a favorite of director Sam Raimi, which seems proven by how the good-Ash-versus-evil-Ash scene from Army of Darkness is lifted (ripped off?) from this one. 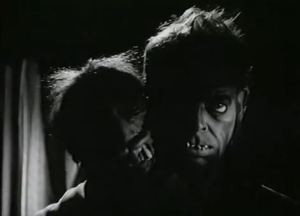 Worth ten cents? This one’s a lot of fun, actually, thanks entirely to a crazed, over-the-top performance by actor Peter Dyneley as Larry. He was doing “Nicholas Cage crazy” before that was a thing.