Re-reading the Fantastic Four comics from the start. We just met the Frightful Four two issues ago, and now they’re back for more in #38.

This one begins on an odd note, in which our heroes are standing atop a bunch of giant photographs Reed took during their trip to the Skrull homeworld last issue. This is quickly forgotten about in favor of some wacky slapstick in the customary “the characters show off their powers for a few pages at the beginning” thing, including a weird bit where Ben catches Sue and threatens to spank her! He’s just kidding, right?

The fun and games end as we’re reunited with the Frightful Four. There’s the Wizard with his gravity-manipulation powers, Medusa with her super hair, and Spider-Man’s old foe the Sandman. The fourth member, Paste Pot Pete, announces that he’s officially changed his codename to the Trapster. “It’s a name with dignity!” he says. He’s also gotten rid of his glue gun in favor of a bunch of high-tech gadgets he calls his traps. The Frightful Four fight among themselves for a bit, including an eye-popping full-page spread in which the Wizard knocks his teammates around. It’s a fun contrast – the FF’s bickering is playful, while their enemies bickering is more mean-spirited. 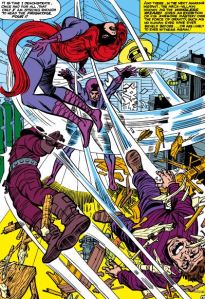 The Frightful Four’s first move is (sigh) to kidnap Sue while Sue is out shopping. (Sigh, again) Reed, Johnny and Ben learn of this and investigate, but with no luck. The villains are hiding out on a pacific atoll that was recently the site of nuclear testing. There, the Wizard explains that the plan is merely to destroy the FF. To do this, he has constructed a deadly “Q-bomb.” 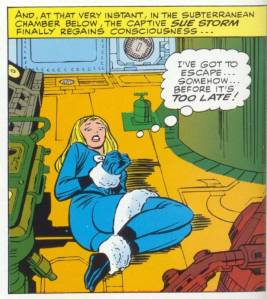 The Wizard’s ship, a little sphere-shaped thing, appears in the sky over New York, and we get several pages of Reed, Ben and Johnny chasing it around. It eventually captures Johnny and cutting off his powers by wrapping him up in “asbestos tape.” Sure, why not? Reed and Ben pursue. At the atoll, the Frightful Four emerge from hiding, Johnny and Sue both escape, and everybody fights. The frightful four escape while the FF are momentarily distracted as they locate Sue underground. There, Ben recognizes the Q-bomb (how is it that he’s the one who recognizes it? From his days as a test pilot?) and he knows it’s about to go off.

From a distance, the Frightful Four watch (and gloat) as the Q-bomb explodes, with our heroes still on the island. Unbeknownst to the bad guys, Sue managed to save everyone in a force field, only to have the blast knock all four of them unconscious. As they’re knocked out, Ben turns back into a human and… cliffhanger!

Unstable molecule: Reed at one point stretches into a giant spring to launch Ben into the air, which is good. Later, he lets himself get punched in the face by the Trapster, which isn’t as good.

Fade out: Sue gets taken captive again, but does manage to rescue everyone at the end.

Clobberin’ time: The Wizard’s spherical ship is almost like a fifth member of the Frightful Four, so it’s gratifying when Ben finally gets ahold of it and smashes it real good.

Flame on: The Trapster tries to take out Johnny with some “suction blasts.” It doesn’t work, though, as Johnny later chases him off with his flame.

Trivia time: This is the issue that attempts to make Paste Pot Pete cooler by renaming him “the Trapster,” but it never really sticks, and he’s gone on to become something of a joke character.

Fantastic or frightful: I never like it when the villain’s only motivation is to destroy the hero, and that’s the case here, making the Frightful Four somewhat uninteresting. Nonetheless, here’s a rare case of the bad guys flat-out winning at the end of the story. The cliffhanger promises to stir up big things in the next issue.