Fantastic Friday: This man, this monster

Re-reading the Fantastic Four comics from the start. How will they follow up the galaxies-spanning cosmic epic of the Galactus trilogy? With a more low-key, stand-alone character-based tale in issue #51, “This Man, This Monster.” 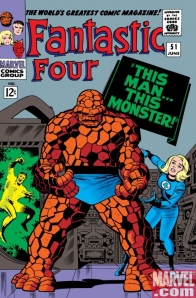 We begin with Ben walking around New York in the rain, an obvious but still appropriate metaphor for how he’s feeling. He’s giving himself crap about how he’s a monster and says he’ll never be human again. (It’s not mentioned how, in the last issue, Ben felt rejected when Alicia gave so much attention to the Silver Surfer, but that event certainly led to his current mood.) Ben meets a mysterious bald man out on the street, who says he knows what it’s like to be alone. The man invites Ben into his apartment, and they chat over coffee (no, really). The coffee is drugged, and Ben passes out, allowing the man to monologue about how he is a scientist and how he wants to destroy the Fantastic Four. 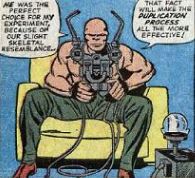 Using a “duplication apparatus,” the man transforms himself into the Thing, which also turns Ben back to human. Leaving the still-unconscious Ben behind, the man leaves with the intent of infiltrating FF headquarters.

At Reed’s lab, we once again get a scene of Sue complaining that Reed is spending too much time instead of with her. Reed says he has to be ready in case Galactus returns. The man disguised as Ben enters, talking like Ben. He starts helping out around the lab when the real Ben Grimm shows up, in his human form, declaring this new Thing to be an imposter. Reed doesn’t buy it, and thinks that human Ben is the fake. Ben is outraged and leaves, saying, “Reed Richards, boy genius! Haw! Wotta laugh!” 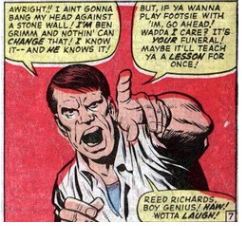 This incident is immediately forgotten, as Reed tells the fake Ben that there is a dangerous piece of equipment in the lab, and if something goes wrong, only the Thing will be able to save Reed. Reed says that there are beings in the universe who have broken the space-time barrier, and now it’s time for humans to do the same. Reed has created a “radical cube” which is a “dimensional entrance to subspace.” While inside the cube, Reed will be tethered to Earth with a “super-tensile strength cable.” He wants the fake Ben to hold the cable and pull Reed out if anything goes wrong. (Got all that?)

While the technobabble sinks in, we cut to Metro College, where Johnny is enjoying life as big man on campus, although the literal big man is his musclebound Native American friend Wyatt Wingfoot. The two of them run afoul of jerkass star quarterback Whitey Mullins, who wants to pick a fight with Johnny. Before Johnny can flame on, the world-weary Coach Thorpe breaks them up. Thorne then recognizes Wyatt, expositing that Wyatt’s father is the greatest Olympic decathlon runner in U.S. history. Thorpe then tells his wife that he’ll stop at nothing to get Wyatt to join football team, looking kind of evil as he says it. 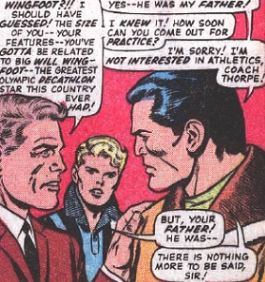 Back at HQ, Sue begs Reed not to enter the cube. “I have a premonition of disaster!” she says. (Since when does she have this power?) Reed argues that subspace must be investigated, for the good of all mankind. The imposter Thing is impressed, realizing that Reed isn’t just all talk. We get two pages of gorgeous Jack Kirby artwork as Reed finds himself in what he calls “the crossroads of infinity.” (So much for this being a smaller, non-cosmic tale.) Then it gets dangerous, as these things so often do, as Reed discovers that matter in subspace is negative, and cannot come in contact with the positive matter on Earth. 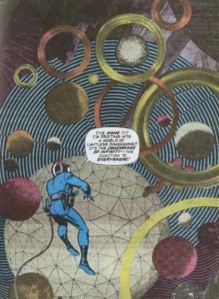 At the other end of the line, the cable snaps, and the fake Ben changes his mind about the FF, deciding that, yes, he will rescue Reed. Fake Ben jumps into the cube, and now he and Reed are both trapped there. Reed gets all dramatic, willing to face his own death, but wracked with guilt over drawing Ben to his death as well. Such nobility really speaks to the fake Ben, so he uses the Thing’s strength to hurl Reed back to Earth. All alone, the fake Ben floats away into subspace, thinking, “I finally learned what it means to have… a friend.”

Checking in with the real Ben, he’s about to knock on Alicia’s door, impressing her with his new human self. Just as he knocks, he transforms back into the monster. He runs off before she comes to the door. (Apparently, they’re considered broken up/separated by this point.) He returns to headquarters, the truth is sorted out, and the imposter gets his due when Reed says he died as a hero. 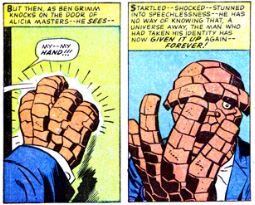 Unstable molecule/Fade out/Clobberin’ time/Flame on: This is interesting; throughout the entire issue, the characters do not once use their super powers!

Trivia time: Although not called “the Negative Zone,” this is indeed the Negative Zone’s first appearance. It’s always been one of my favorite aspects of FF lore, that there’s this doorway to a mysterious, dangerous universe right there inside their home.

The villain’s name is not revealed in this issue. I’ve searched and searched to see if he ever returned in later stories, but I haven’t come across any. Anybody know if he ever came back?

Discussion of Wyatt Wingfoot’s father is abruptly cut off, reestablishing that there might be something mysterious about Wyatt.

Fantastic or Frightful: What a great issue. Our mystery villain’s change of heart makes for some nice drama, as does Ben’s depression. The Negative Zone stuff is really exciting as well – gotta love the Kirby dots! 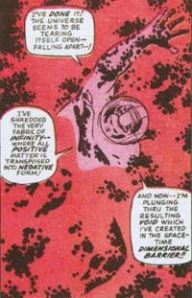 Next week: Wakanda is lovely in the springtime.