21 Jump Street rewatch: “You Oughta Be In Prison”

Rewatching 21 Jump Street! Season two, episode nine: “You Oughta Be In Prison” is all about Hollywood.

What’s goin’ down: Hanson and Penhall are undercover as bodyguards for a big Hollywood star, Jeremy Woods, filming a movie in town. Meanwhile, a teen prisoner is about to turn 18 and be transferred to “big boy” jail. A convenient bus crash then has him on the run. 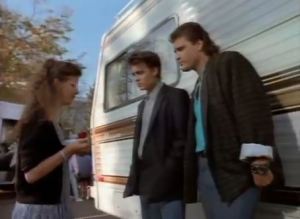 Here’s Hanson: It’s not until late in the episode when we realize what the prison escapee plot has to do with anything. He spots Hanson on a TV report about the actor, and recognizes Hanson as the cop who put him away. 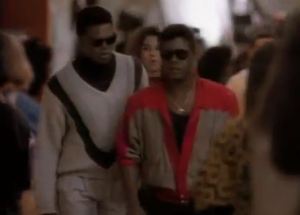 The sunglasses aren’t suspicious, but the Cosby sweater is.

Penhall’s prerogatives: When the movie set needs someone who can act like a cop, Penhall gets the part at the last minute. This continues the arc started a few episodes back about him wanting to be a comedian, and future episodes will further explore his interest in acting.

Undercover blues: Penhall and Hanson think the actor is a total jerk (or a “dink,” as they put it), only to get to know the real him as time goes on.

Goin’ to the chapel: What’s the deal with them being undercover as bodyguards? The episode goes overboard explaining this, saying that Jeremy doesn’t trust cops, that he’s been getting threatening letters, and then adding that mayor insisted on it. 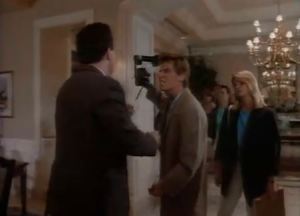 The cost of fame.

Torn from today’s headlines: Jeremy punches out a photographer, no doubt to invoke the famous 1986 incident in which Sean Penn beat the crap out of a paparazzi. 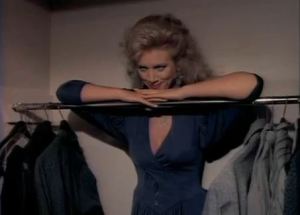 “Hi. Did you know I starred in CANNIBAL WOMEN IN THE AVOCADO JUNGLE OF DEATH?”

Jumpin’ or not? After a bunch of serious episodes, it’s nice to see the show have a little fun. The high school setting of the movie-within-the-movie is some nice meta humor. Then, the second half does the “action movie” thing where Hanson and Jeremy square off with the villain. Good stuff.