Rereading the Fantastic Four comics from the start. With threats coming from outer space, our heroes retreat to inner space in issue #76. 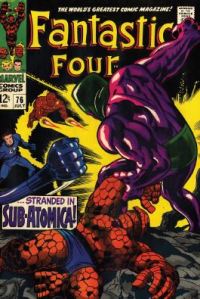 The set-up is this: Galactus has returned to Earth, demanding that the FF deliver him the Silver Surfer, who has retreated into the microverse. Reed makes a deal with Galactus, saying he’ll go get the Surfer in exchange for Galactus not devouring the Earth. Reed, Ben, and Johnny cram into Reed’s newest invention, a submarine-like “Reducta-craft.” Then it’s a throwback to Fantastic Voyage, where they shrink down to microscopic size and prepare to be shot through a needle. Ben complains with his usual grousing during all this, but Johnny compares it to a roller coaster. 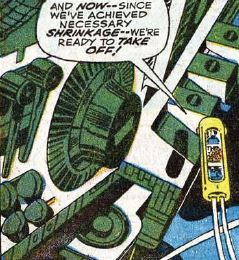 We then spend some time with pregnant Sue, who has just had a doctor’s visit, assuring her that the baby is doing just fine. She asks Crystal why she hasn’t shown Sue a paper or played the radio in several days. Crystal tries to brush this off, saying it’s just news about “the war.” (That’d be the ‘Nam.) Sue’s no idiot, though, suspecting that this means the three guys are in danger. She has another pity party, fretting about not being able to help, and wondering what it’ll be like after the baby is born. 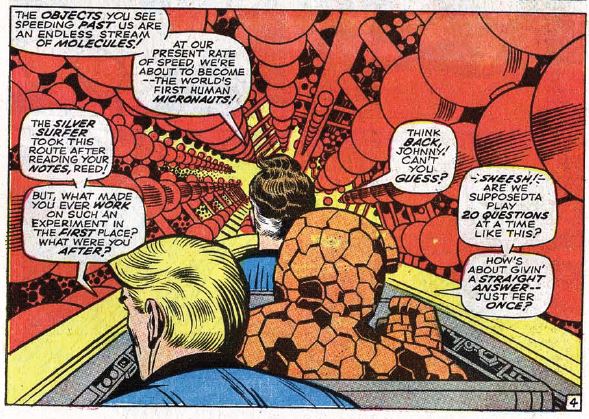 Back in the lab, the Reducta-craft flies along, with Reed saying it is propelled by “the power of its own shrinkage.” (Cue Seinfeld reference.) Forget that talk about a needle, because it just flies into the gooey black liquid on a microscope slide, the same liquid that the Silver Surfer used to escape into the microverse. Reed says they’re about to become the first human “micronauts.” Reed says he developed this experiment after the team’s encounter with Psycho-Man, whom you’ll remember was a tiny microscopic guy living inside human sized armor. They follow the Surfer’s path, only to have him fly by them at great speed. 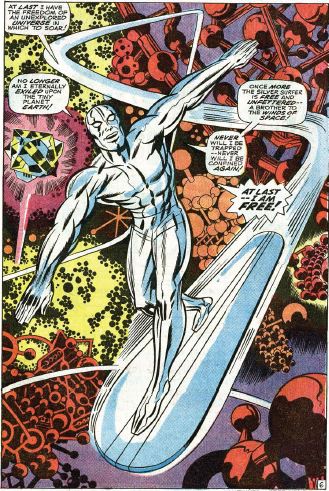 We then get a killer splash page of the Silver Surfer soaring through the microverse. He’s never looked happier, before or since. The normally deep and contemplative Surfer is now exhilarated and joyous, saying “At last I am free!” Then Reed is a total jerk, firing a stun blast at the Surfer, knocking him off his surfboard. He recovers quickly, bragging about being able to survive meteor storms, but Reed says the blast was only to establish contact. 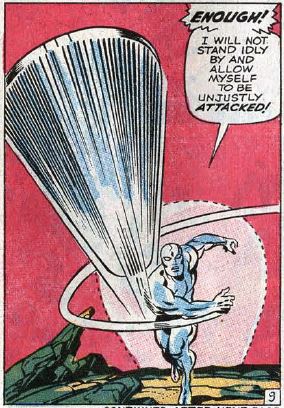 The Surfer lands on a nearby planetoid and surrounds himself with a “cosmic protection shield.” Then it’s a couple of pages of our heroes trying to break through the shield, which they can’t. The Surfer borrows a move from Captain America by throwing his surfboard at the FF which, confusingly, knocks all three heroes for a loop. The Surfer flies off, and is pursued by a mysterious green spaceship.

If all this wasn’t cosmic enough, we then cut to Galactus, looking hungrily at the Earth through a scanner. He’s got this kooky little machine that looks a little like a thermometer. When the thingamabob reaches the top, that’s when he’ll devour the Earth. Now we have a ticking a clock. 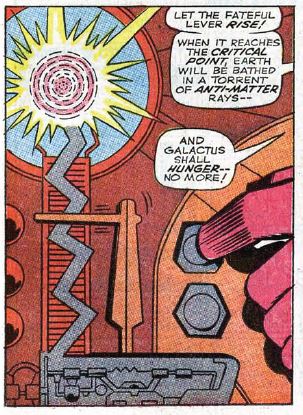 Back in the microverse, Reed tells Ben and Johnny to take the ship and go after the Surfer, offering to sacrifice himself by fighting the Indestructible One. “Tell Sue my last thoughts were of her and the baby!” he says. But then, the Indestructible One vanishes right before them. The Silver Surfer has arrived, saying he was watching the fight for his amusement. (What a jerk!) Reed’s gallantry, though, has changed the Surfer’s mind. He agrees to return to Galactus, to save humanity. As he flies off, Reed says the FF will stay behind in the microverse, to find and deal with Psycho-Man.

Unstable molecule: Reed wanting to sacrifice himself seems out of character, but we must remember that stakes are high, with Galactus waiting in the wings. And, yeah, the plot demands it.

Fade out: Sue has gone from worrying about the guys being in danger, to wanting to be out there, helping them save the day. Is that progress?

Clobberin’ time: Ben holds his own against the Indestructible One, even with a volcano exploding underneath him. Ben’s past a pilot is subtly referenced, in that Reed assumes Ben can fly the ship back to Earth.

Flame on: Although cautioned against using his fire, so that it doesn’t set off more volcanic activity, Johnny proves to be so in control of his powers that he can attack the Indestructible One with precision and not destroy the planet.

Trivia time: As noted above, 1966’s Fantastic Voyage is a huge influence on this issue. With the name “Fantastic” in the title, I guess it was only a matter of time.

The Microverse, which is actually called the “Micro-world” or “Sub-atomica” in this issue, has become a staple of the Marvel Universe. It’ll later be defined as an alternate universe that can only be accessed by shrinking, but in this issue there’s definite shrinkage (hehe) with talk of molecules flying past.

To my knowledge, this is the first use of the name “Micronauts” in a Marvel comic, although the Japanese Microman toys that inspired Marvel’s on-again/off-again Micronauts series debuted in 1974. The Micronauts franchise has a crazy convoluted history in both toys and comics.

Commercial break: How huge were Marvel Comics in the ‘60s? You could send away for an autographed photo of Stan Lee:

Fantastic or frightful: The story goes that Jack Kirby was burned out by this point and ready to leave Marvel, but his art in this issue is so stellar and so like the far-out stuff he’d go on to do in the ‘70s, that I can’t help but feel he’s giving this issue his all. The script has some fun dialogue but a lot of head-scratching elements. (How is there oxygen in the Microverse?) Still, the art elevates it to excellence.

Next: Answering the summons.