Rereading the Fantastic Four comics from the start. Last issue saw Crystal become an official member of the team, so this week, in issues #82-83, we check in with her family, the Inhumans. 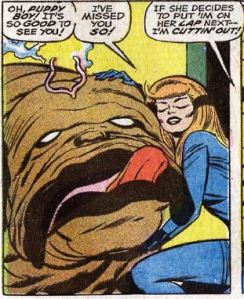 Elsewhere, a freaky blue-skinned guy reports to his master, saying the Alpha Primitives succeeded. His master is Maximus, who, we learn, has staged a coup, and now sits on the Inhumans’ throne. He has Medusa next in chains next to him, as a symbol of his triumph (her super-powered hair has been coated with a special chemical, so she can’t use it to fight back). He’s also decked out in some truly crazy silver armor. Crystal is brought before him, and Medusa explains that he defeated the royal family by sapping their will with his high-tech “hypno-potions.” Maximus then reveals Black Bolt, Karnak, and Triton trapped in a big glass cage. I imagine their wills are still sapped, because otherwise Black Bolt and Triton should’ve had no problem breaking out of there. Also, Triton has apparently gotten over his “always has to be in water” problem. He’s not even wearing those tube doo-hickeys anymore.

The FF take their rocket to the Inhumans’ city, located in the Himalayans, with Ben doing comedy “back seat driver” shtick along the way. They land, where portions of the now-destroyed great barrier are still scattered about. Our heroes make their way into the city, escaping a couple of death traps, and then battling Zorr, a super-powered primitive. Basically, he’s a huge robot gorilla. (Robot gorilla!) While fighting, Zorr catches everyone up to speed, letting the FF know that Maximus is in charge. He manages to knock Reed, Ben, and Johnny unconscious.

Maximus watches the fight on a viewscreen and of course he gloats about how great he is. Karnak, whose power is to find the weakness in any surface, can’t find one in the cage, saying it’s not glass, but that it’s made out of a substance he’s never seen before. Crystal tries to use her powers on Maximus, but he’s protected by a “sub-ionic” force field. Maximus then reveals his plan – he has a huge “hypno-gun” which is powerful enough to blanket the entire planet in hypno-rays, bringing the whole world under his control. And that’s the cliffhanger.

Issue #83 begins with Reed, Ben and Johnny trapped in similar cage as the Inhumans. Johnny can’t burn his way out, and Reed theorizes that the cage is powered by a hypnotic field, and that they’ve merely been made to believe escape is impossible. Maximus prepares for his coronation, and we see some other Inhumans serving him. We get a return appearance of Aireo, not seen since issue #47, and Leonus, an Inhuman with a blond beard and metal hands. There’s also a centaur-like Inhuman and a plant-like Inhuman with branches growing from his forehead like horns. In other comics, it’s revealed that the Centaur is named Stallior and the plant guy is Timberius. Pun names!

The Inhuman royal family, still trapped in their cage, pleads with Black Bolt to use his powerful voice to escape, even though that might kill the rest of them. Black Bolt instead concentrates his voice with perfect pitch, shattering just one small part of the wall. This is enough for the Inhumans to escape. This also frees Medusa – so it wasn’t a chemical, but another hypno-trick. The Alpha Primitives attack, and there’s a couple of pages of the Inhumans fighting them. Then, the Inhumans march on, in hopes of destroying the hypno-gun.

We check in with Sue for half a page. She’s looking after the baby, and says that she and Reed still haven’t chosen a name. (I’ve read ahead a little, so I can tell you that we’re not going to learn the baby’s name for quite some time, so settle in for the long haul on this subplot.) Reed, Ben, and Johnny are still trapped in their cage. Reed convinces them to escape not by punching their way out, but by concentrating. They break the hypno-programming with their strength of their own thoughts, and they’re free. Zorr attacks again, but this time the FF acts quickly, taking him down before his built-in hypnotic inducer could work on them again.

Maximus fires his hypno-gun and it starts to work, as he can feel the minds of everyone on Earth bending to his will. Then he gets greedy, saying he’ll next aim the gun at space and rule the entire universe. Too bad Crystal shows up and destroys the gun with her powers. The Inhuman populace, no longer under hypnotic control, starts to revolt, but Black Bolt stops them from rioting. Maximus and his followers escape into space on board a spaceship, and Johnny and Crystal reunite with a kiss. (We never find out if the Inhumans gave their permission for Crystal to join the FF. I guess that’s implied.)

Unstable molecule: So, Reed has got to have some kind of latent telepathic abilities, right? He out-brained Dr. Doom in annual #2, he communicated with Galactus across space with his thoughts in issue #75, and now he breaks free of high-tech hypnotism just by concentrating.

Fantastic fifth wheel: Crystal starts the story needing to be rescued, which isn’t so great, but she ends it by destroying Maximus’s giant weapon in a great “girl power” moment.

Clobberin’ time: Ben is pretty much comic relief in this story, tossing more wisecracks than punches.

Flame on: Johnny has to tell Crystal not to hug him until after his flame has died down. You’d think she’d know that. Also, an earlier issue had her walking through flames unharmed, so why wait?

Commercial break: Not sure what this has to do with James Bond, but here you go:

Trivia time: The FF were busy during these two issues, as they guest starred in Avengers #60, Silver Surfer #5, and Sub-Mariner #14 at the same time.

Fantastic or frightful? This is basically an Inhumans story guest-starring the Fantastic Four. The closest thing there is to a main character is Maximus, as he’s the only one with any real arc. The other characters are all just running around aimlessly. Describing all the tech with the “hypno” prefix doesn’t help. There are some fun Kirby designs, but other than that, this one’s something of a misfire. The really good stuff starts next week.

Next: Doom… and Dum-Dum!