Rereading the Fantastic Four comics from the start. The Silver Age was coming to a close by this point, and comics were breaking out with smarter, more sophisticated storytelling. This is evident in the arc that begins in issue #84, which brings back Dr. Doom.

The FF are in a crazy-looking “gryo-ship” on their way back from visiting the Inhumans last issue. The ship is a gift from Black Bolt to help them get home. Somewhere over Europe, though, their flight is interrupted by a bunch of S.H.I.E.L.D. fighter jets. Nick Fury and his mustachioed sidekick Dum-Dum Dugan order the FF to land.

Elsewhere, an old man is running through a bunch of underground catacombs saying he must escape. He reaches the outside, finds himself on a beach, and is overjoyed that he’s made it. But wait, someone with a gun is waiting for him. It’s Doctor Doom. He says he won’t stand for a single one of his subjects to leave his kingdom. Doom shoots the guy, but doesn’t kill him. He further speechifies about all he’s done for the people of Latveria – he’s given them food, shelter, and everything they could ever want, all in exchange for nothing but their total obedience.

Elsewhere, at a fortified base, Fury tells the FF that a S.H.I.E.L.D. agent has gone missing while investigating reports of a secret army in the area. He shows them a giant robot arm the agent recovered. Because this is a Marvel comic, the arm immediately comes to life and starts shooting up the place. Johnny destroys the arm, and Fury explains that only Dr. Doom has robotics tech this advanced. Reed agrees to help. 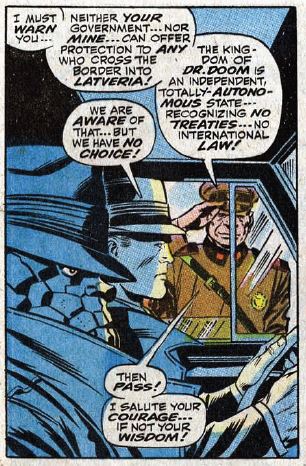 From there, the FF are in a car driving through “Communist-controlled central Europe,” where the cross the border into Latveria. The border guards surmise that the Americans will disappear in Latveria, never to be seen again. Inside the car, Reed says he knows they’ll likely be captured by Dr. Doom, but that’s the best way to learn what Doom is up to. Once inside Latveria, the car is torn apart by being on a magnetized highway (science!) and Doom’s robots attack. Reed says not to resist, but Johnny and Ben fight anyway, only to be knocked out by some gas. Doom arrives on the scene – hilariously wearing a gas mask over his regular mask – and says the FF will be his prisoners, forever.

Reed, Johnny and Ben wake up in what appears to be a luxurious hotel. Johnny wants to find Crystal, while Reed tries to deduce why Doom has put them there, instead of in his dungeons. Watching all this on a viewscreen, Doom speechifies that while the FF slept, he gave them hypnotic suggestions, so that now they have mental blocks preventing them from using their powers. Doom says there will be a festival to celebrate his victory over the FF, adding that there is a penalty for anyone who looks discontent. 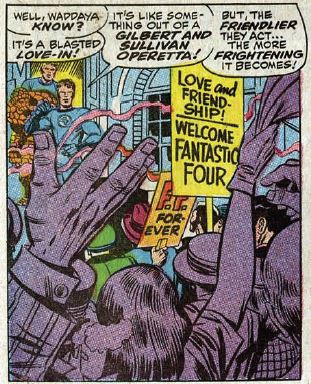 Crystal contacts Johnny on a weird-looking phone. She says she’s all right, and that all the people are happy, while seemingly also afraid of something. Outside, there’s a huge festival, with all the Latverians celebrating the FF’s arrival. Johnny and Crystal are reunited, and our heroes are perplexed by this hospitality. Ben jokes that maybe Doom has found religion, but Reed theorizes that the Latverians are merely puppets on Doom’s strings. Reed says he’s going to make a run for it and cross the border, but he’s zapped by one of Doom’s devices right on the spot. (So, is the border right there?) Doom appears on a screen and tells Reed that no one leaves Latveria. “You will remain here,” he says, “and be eternally happy!”

Unstable molecule: S.H.I.E.L.D. comes to Reed when they have a Dr. Doom problem, establishing Reed as the authority on all things Latverian.

Fantastic fifth wheel: Crystal comments that part of the FF’s “basic rule” is that none of them can ever stand too close to each other, because that would make them easy targets. I’ll be pretty surprised if this “basic rule” ever gets a second mention.

Clobberin’ time: Ben’s struggling to remain standing when breathing in the knockout gas is a great moment for him. He goes down fighting.

Flame on: Proving himself to be a real “hot-head” (heh) Johnny is quick to jump into action without thinking in this issue, picking fights and destroying stuff when Reed cautions him not to. Doom’s robots stop him with an electro-pistol.

Commercial break: What, exactly, kind of martials arts are these?

Trivia time: Who’s this “Dum-Dum” guy? That’s Dum-Dum Dugan, Nick Fury’s sidekick and supporting character of pretty much any S.H.I.E.L.D. story. Not sure how his handlebar moustache and bowler hat are secret agent material, but he’s a tough guy so he can get away with it. Dum-Dum was played by Neal McDonough in the movie Captain America: The First Avenger.

Fantastic or frightful? Not much happens in this one, just setting up future issues. There’s a lot to say about what’s coming, so we’ll keep this one short. It’s an interesting look at Doom’s personality. As ruler, he believes he’s making his people happy, but only as long as he orders them to be happy. A fun issue, but the good stuff is yet to come.

Next: The true face of tyranny.