Rewatching 21 Jump Street! Instead of high school, our heroes are heading for college in season three, episode six, “Hell Week.”

What’s goin’ down: Investigating a rape case at a fraternity, our Hanson and Ioki have to pledge and join, before they can get any of the suspects to talk. 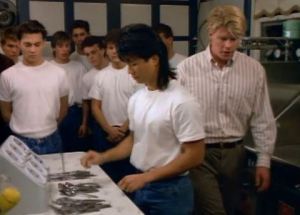 Here’s Hanson: As a pledge, Hanson has to deal with all kinds of torments on the road to being a brother, including an ongoing knife/spoon/fork game that takes up a lot of screentime. He later uses this game and other hazing rituals to turn the tables on the cruel frat boys. And yes, there is paddling.

Penhall’s prerogatives: Covering all the bases, the other Jump Streeters are undercover in other parts of campus. Penhall is living in the dorms, where he befriends the victim’s brother.

Book ‘em: Booker is undercover with the (gasp!) nerd frat, who live right next door to the evil jock frat. Rather than trying to fit it, he keeps his awesome hair and cool leather jacket. In doing so, he teaches the nerds a thing or two about being cool.

Undercover blues: It ends with a hazing incident at a swimming pool, in which someone almost drowns, only for Hanson and Ioki to bring him back with CPR and mouth-to-mouth.

Goin’ to the chapel: Hanson calls Captain Fuller by his first name, Adam, in one scene. This further shows how much Fuller has become part of the “family.”

Torn from today’s headlines: Hazing! This is one of the controversies that never goes away, every couple of years, there’s yet another hazing incident that makes headlines. Specifically, the episode calls back to various party-dude comedies of the era, notably Porky’s and Revenge of the Nerds.

Trivia time: We’ve got yet another future Twin Peaks regular as a guest star – Gary Hershberger, who played dopey teenager Mike on Peaks. He’s actually quite good in this episode as the sinister frat leader. 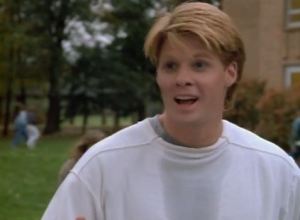 “My turn-ons include one-eyed married women with superhuman strength.”

Jumpin’ or not? I don’t know why this has to be a rape case, as the cops could just go after the frat for the hazing stuff and, eventually, attempted manslaughter. But I’m not a TV cop, so what do I know? Aside from this nitpick, the episode is fun. Hanson is a total badass the way he can take anything the bad guys throw at him, and Booker’s reluctant friendship with the nerds has a lot of great character moments for him. It’s jumpin’!

Next: A dance with dragons.