Fantastic Friday: Prisoners of the mind

Rereading the Fantastic Four comics from the start. Issue #85 gives us more insight into Dr. Doom and his boastful ways.

When we last left our heroes, Dr. Doom had captured them. They’re in a peaceful, idyllic European village where everyone is happy. Sounds nice, but except they can’t ever leave, and this is Doom’s triumph over them. This issue begins with the FF still in the town square, surrounded by Doombots. Dr. Doom, communicating with our heroes via monitors he’s placed everywhere, gloats that the FF can’t leave, and that he’s removed their powers. Ben tries to clobber the Doombots, but without his strength he gets knocked back easily. Reed reminds Johnny (and the audience) that Nick Fury sent them to Latveria to find and destroy Dr. Doom’s secret army.

Inside his high-tech lair, Doom gloats some more, saying there are sedatives in the FF’s food, which will make them more susceptible to his “hypno-persuader” which has removed their powers. Doom is joined by his right-hand-man, Hauptmann, and says it’s time for a demonstration. He’s going to reveal his new army to the world. A couple of thugs are fighting the Doombots, to test the robots’ strength. The two guys make a run for it, hijacking one of Dr. Doom’s armored vehicles Doom lets them go, saying this is the perfect test for his new army. It’s a newer, nastier breed of Doombot, a green one, which tears apart the vehicle and seizes the fugitives without any trouble. Doom gloats again, saying he’s invincible, and that he’s going to use the new robots to destroy an entire village as their next test. 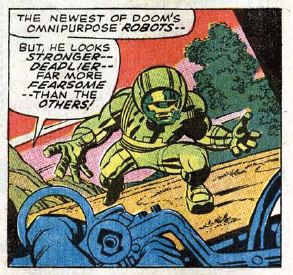 The FF have lunch at a sidewalk café, noticing that although the people look happy, there’s an underlying fear and paranoia to them. The sedative in the food knocks them out, and Doom’s henchmen hook them up to the hypno-persuader, which mentally blocks their powers as they sleep. Reed fights back and is almost able to resist, thanks to his love for Sue. 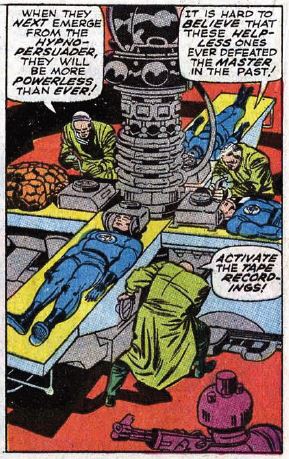 Speaking of Sue, we then check in with her. She and a real estate agent are checking out homes, nice suburban houses to raise a child. (Where is the baby? God only knows, because he’s not mentioned.) Sue meets some fans, and then the real estate agent takes her into the woods to show a house off the beaten path. It’s a futuristic metal contraption that’s actually the roof, with the rest of the house underground. The agent says the house was abandoned years ago and the locals are afraid to come here. (You’d think that’s the sort of thing not to tell a potential buyer.)

Back in Latveria, the FF wake up from their hypno-conditioning, which has also programmed them not to be violent, causing them to recoil in fear at the very thought of fighting. Doom gloats some more, as he’s getting his royal portrait painted. Get this – it’s a painting of him without his mask! He feels he can now go without it, and he further declares that his horribly scarred face will be the new standard for masculinity around the world. (We of course don’t see his face, as some things are best left to the imagination.)

The artist and Doom have an agreement, that Doom will give the artist his freedom if Doom likes the portrait. But Doom goes back on the deal, saying he has absolute power and can do what he will. To prove his point, he unleashes the green Doombots on the village, and have them destroy everything. Conveniently, this is the same village where the FF are staying. Then there’s an odd bit of business where the green Doombots go on a rampage. We’re told they’re not following anyone’s orders, not even Dr. Doom’s – but then a few panels later it says they are following Doom’s orders, even though he’s not in this scene. The issue ends with the FF powerless, helpless, and in the Doombots’ path.

Unstable molecule: Again, Reed’s brain is superhumanly awesome, able to put up a fight against the hypno machine.

Fade out: Sue looking for a new house seems odd. For one, it’s been established that the FF owns other houses and apartments, even if we rarely see them. Second, there’s no mention of who might be watching the baby. On the plus side, this does nicely foreshadow the “they move to the suburbs” plot from John Byrne’s ‘80s run on the book.

Fantastic fifth wheel: While the others are focused on getting out of this predicament, Crystal is the compassionate one, who shows concern for the Latverians, trapped just like the FF.

Clobberin’ time: After getting roughed up by the Doombots, Ben starts to be OK with his captivity. He says the Latverian food is better than a Yancy Street pizza joint. (Blasphemy!)

Flame on: Instead of convincing Johnny he’s lost his powers, the hypno device instead tells him he’s afraid of fire, which is an interesting little detail.

Commercial break: For all the comic-reading kids who dream of becoming accountants someday:

Trivia time: The painting of the unmasked Dr. Doom returned (or did it?) in a recent Superior Foes of Spider-Man story.

Fantastic or frightful? This story arc has often been compared to the 1960s TV show The Prisoner. Hey, if you’re going to steal, steal from the best. It seems like this issue is more set-up, but there’s a lot of cool character bits. I like how Doom is acting as if he’s already taken over the world before actually taking it over. I also like how our heroes aren’t panicking or over-reacting to their predicament, but instead just sitting down and figuring things out, like pros. More good stuff to come.