Fantastic Friday: Blinded by the light

Re-reading the Fantastic Four comics from the start. Last issue, the FF bought a new house, but they didn’t do a title check, which would have revealed the place is still owned by the Mole Man. He attacked, zapping our heroes and making them all blind! That’s where issue #89 picks up.

We begin in a very cinematic fashion, with the first few pages of the issue depicting the “camera” a.k.a. the reader’s point of view, floating through the woods, then into the mysterious house, and then catching up to the FF in the middle of the fight with the Mole Man. Ben is here with the team, even though the previous issue made a point of telling of us that he had stayed behind. Anybody got a No-Prize for this one? The FF try to fight back, but because they’re blind, the Mole Man kicks their butts big time.

Then, somewhat randomly, we cut to outer space, for another trippy Kirby photo-page. An alien spacecraft observes an Earth rocket en route to the moon, but the aliens dismiss this historic event as Earthlings playing with toys. Then comes the reveal — it’s the Skrulls! More specifically, it’s a Skrull who calls himself “The Slaver.” He says that even though Earth is off-limits to Skrulls, he’s breaking those rules in the hopes of finding and capturing one very important human. 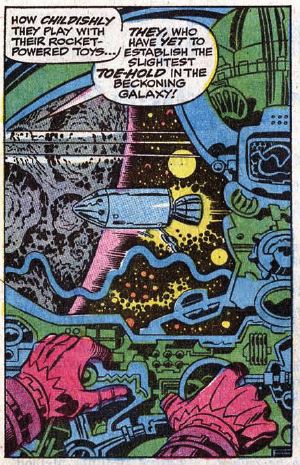 Back to the mystery house. The Mole Man knocks Johnny unconscious, and then repeats his plan of bombarding the Earth with rays that will render all humanity sightless. With his army of single-minded subterraneans (still not called “Moloids”) at his disposal, the Mole Man says his conquest of the entire world will be simple. Sue tries to even the odds by turning invisible, but the Mole Man’s staff has sensors which can spot her. She uses her force fields to knock him around, and Reed surmises that the Mole Man’s glasses are his weakness. It takes some doing, but Reed and Sue manage to get the glasses off. The Mole Man’s sensitive eyes are overcome with the brightness in the room. It comes with a price, as Reed is zapped by the Mole Man’s staff, which M.M. says is fatal to the touch.

Sue flips out, attacking the Mole Man, as he has a total guilt trip, saying “I’m never to blame! Never! Never!” The staff is destroyed, which restores everyone’s sight. (Science?) There’s an incredibly badass splash page of Johnny flying to attack the Mole Man, before the Mole Man can summon his subterraneans. Defeated, the Mole Man collapses, reciting his origin, how mankind drove him underground as an outcast. Johnny sees through the B.S., saying that the Mole Man chose to go underground, and that no one forced him. Meanwhile, Ben performs artificial respiration on Reed, bringing him back to life. Sorry, slash-ficcers, but we don’t actually get to see their lips touch. Ben has a great moment when he reveals that for as much crap as he gives Reed, he thinks Reed is “the greatest.”

Reed comes back to life, and our heroes are a family again. Elsewhere, the Slaver’s ship lands, and we have a cliffhanger.

Unstable molecule: Reed sacrifices himself to save the team, grabbing the Mole Man’s dangerous staff, and keeping it pointed at the wall the whole time it was zapping him, so that no one but him was harmed.

Fade out: Here we see hints of the era in which Sue became the team’s most powerful member. She thinks of new ways to use her powers, she outsmarts the baddie, and she stands up for her family.

Clobberin’ time: So, where did Ben learn artificial respiration? In his days in the air force? In his years as a wrestler? And will this ever come up again?

Flame on: Johnny’s the one who takes the Mole Man down in the end. Even though Johnny’s a good-looking blonde guy, he shows great empathy for Ben, who is a monster, and Alicia, who is blind, saying they’ve made good with their lives while the Mole Man went and hid underground.

Fantastic fifth wheel: Crystal uses only “half power” when attacking the Mole Man, in case her elemental blasts accidentally misfire and harm her teammates.

Commercial break: Another classic, sneezing powder! What do you suppose was actually in this stuff?

Trivia time: The reference to moon rockets is timely, as this issue came out in August 1969, and the actual moon landing occurred in September 1969.

Fantastic or frightful? I’m torn on this one. On one hand, the crisis really gets to the heart of who these characters are and why they’re so great. They’re a family, and they’re willing to sacrifice everything to save one another, even if they might have been bickering a few minutes earlier. On the other hand, the Mole Man isn’t much of a threat, defeated awfully easily. The high drama doesn’t match the relatively low stakes.