James Bond rewatch: The Man with the Golden Gun

Rewatching the James Bond films chronologically. Rumor has it that producers wanted a villain who could be Bond’s equal — a true rival. Therefore, the great Christopher Lee joins the party as The Man with the Golden Gun. 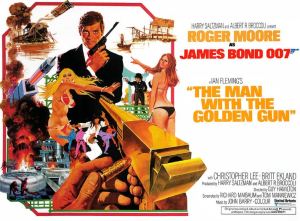 Bond blurb: Scaramanga (Lee), a high-price assassin, is out to get James Bond. M suggests that Bond lay low, but Bond instead goes on the hunt, tracking Scaramanga down through his signature gold bullets and his lover, Andrea. It all comes to a one-on-one showdown between the two on Scaramanga’s private island. 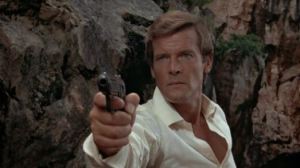 Bond background: James Bond is famous! At least in the intelligence community, he is. The whole plot hinges on everyone knowing how badass Bond is, which is why Scaramanga comes after him.

Bond baddies: Christopher Lee is his usual cool-yet-imposing self, but there are a few moments that humanize Scaramanga. When Bond finally arrives on Scaramanga’s private island, the villain is all happy and upbeat. He’s delighted that Bond is there so they can try to kill each other. Also, Herve Villechaize is here as henchman Nick Nack, basically auditioning for his famous role on Fantasy Island.

Bond babes: Maud Adams plays the exotic yet haunted Angela, and you’d think she’d be the main love interest, so it’s a shock when Scaramanga takes her out in the way he does. The bad news is that this leaves Miss Goodnight to fill romantic partner role. Just who is Miss Goodnight, anyway? As she’s introduced, it’s established that she and Bond already know each other and have been working together. Yet, she’s the worst spy ever. Half of the plot’s complications come about because of her clumsiness and cluelessness. Britt Eckland is certainly cute, and her cavorting in that bikini is appreciated, but the character is bimbo-o-rama. 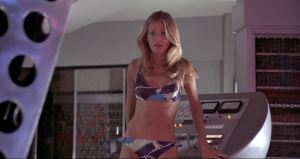 Bond best brains: The only real gadgets we get are tracking/communication devices, and a couple of weird guns (including a golden one). There’s a funny running joke where M keeps telling Q to shut up.

Bond bash-ups: The ‘70s kung fu craze predicted in You Only Live Twice was in full swing by now, so we’ve got Bond in Hong Kong visiting a martial arts school and helped out by a pair of awesome fightin’ schoolgirls. A car/boat chase leads to the movie’s famous corkscrew car jump, complete with embarrassing slide whistle sound effect. The finale has a laser beam and explosions, but it’s really the face-off with Scaramanga in his kitschy funhouse that’s the movie’s action highlight.

Bond bewilderment: Good ol’ Sheriff Pepper returns, running into Bond while on vacation in Asia. This time he becomes Bond’s sidekick for part of the movie, instead of becoming the main character for part of the movie. Pepper makes a ton of racist comments, just so we can hate him even more. 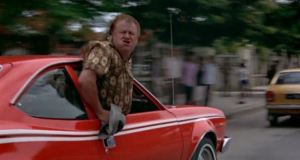 Bond baggage: There are a lot of lines about the “energy crisis” and solar power. This was a big deal in the early ‘70s, the era of long lines at the gas pumps.

Bond babble: This flick is a breath of fresh air following Live and Let Die. After the buffoonishness of that movie, this one looks and feels more like we think a Bond movie looks and feels like. More importantly, it brought back an important element of the series — intrigue. Yes, there’s campiness and cheesy jokes, but the fact that Bond has to look over his shoulder throughout the whole movie gave it just enough seriousness and, dare I say, drama that I was invested the whole time. The Man with the Golden Gun is divisive among fans, I hear, but you can count me among its supporters.

Next: Nobody does it better.