Rewatching 21 Jump Street! After all the hype about introducing this new character of Booker, he hasn’t done a whole lot. That all changes with our first Booker-centric episode in season three, episode fourteen, “Nemesis.”

What’s goin’ down: While undercover among a bunch of drug-dealing teen “wastoids,” one of the teens is murdered. Someone thought the kid was a narc, so Booker blames himself for the death. 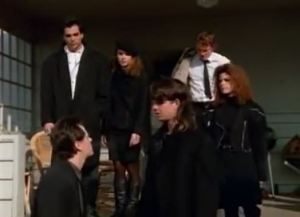 Wastoid is the new black.

Here’s Hanson: According to never-wrong internet rumors, this episode was written for Hanson, but Johnny Depp bailed due to “creative differences.” He only appears in one short scene.

Penhall’s prerogatives: In a nice continuity touch, Penhall is still in crutches after being injured in the chase through the woods in last week’s episode, “A.W.O.L.”

Book ‘em: We learn that Booker loves old black and white horror movies, hates Chinese food (because he found a worm in an eggroll once), has a scar on his knee from a childhood bicycle injury, and his high school nickname was “Joe Cool.” Then there’s a funny bit where someone finds a COMPLETELY INSANE photo of the Jump Street gang at Booker’s birthday party.

Undercover blues: With suspicions running rampant, Booker is desperate not to reveal he’s really a cop, as the bad kids pressure him to do drugs and even commit murder. He sticks with it, in the hopes of busting up the drug ring and finding the killer.

Trivia time: We meet Booker’s mother, played by actress Linda Darlow. She later reprised the role in one episode of the 1990 Booker spinoff.

Torn from today’s headlines: The opening scene is an ‘80s super-stylized dream sequence, straight from the Nightmare on Elm Street films, which were at the height of their popularity in 1988-1989.

Every town has an Elm Street.

Jumpin’ or not? Richard Grieco is a comedic footnote for a lot of people, but he’s great in this episode, expertly doing the “rage brewing just below the surface” thing. The other star is director Ken Wiederhorn. He’s only done a little TV work and a few forgettable films — including Shock Waves, Meatballs Part II and Return of the Living Dead Part II — but he infuses this whole episode with an incredible visual style, making it look like a multimillion-dollar feature. It’s jumpin’!

Next week: It’s all politics.