Re-reading the Fantastic Four comics from the start. The end of the last issue had the Thing being captured by a Skrull and carried off into space. So why are there 1930s-style gangsters on the cover to issue #91? Let’s see…

We begin with those same gangsters (and their sexy moll) looking at a picture of Ben and talking about how the slave ship is bringing him in. The narrative caption spills the beans a bit too early by stating, “It isn’t a scene from The Untouchables! You’re actually on another planet!” The head gangster, Boss Barker, plans to buy Ben from the slaver and have Ben box a fighter owned by rival gangster Lippy Louie. On cue, Louie shows up to make the bet. He wagers ten “power stones” that Ben can’t defeat his slave, Torgo. (Torgo???)

The Skrull Slaver, who has apparently changed his name to Slave-Master, has Ben trapped in a big stone harness, and he again uses his nerve ray to put Ben to sleep if he tries to escape. They arrive at Kral, a planet on the outer edge of the Skrull galaxy.

Back at FF headquarters, Reed says no one, including police, has seen or heard from Ben in days. The team insists it’s not like Ben to just wander off. Johnny takes off, flying over the city in some desperate attempt to find his pal. 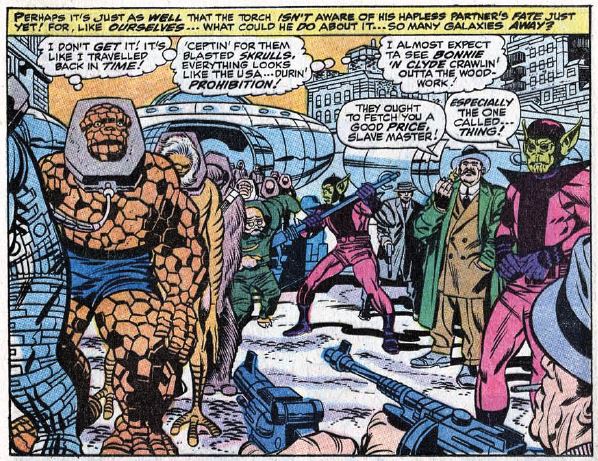 On the Skrull planet, Ben arrives with the Slave-Master and a bunch of other alien slaves. Ben is surprised to learn the planet looks just like New York during the age of prohibition. A bunch of punk kids throw a brick at Ben, he makes the obligatory reference to the Yancy Street Gang, and tries to fight back. More nerve rays from the Skrulls shut him up pretty good. There’s a confusing bit of business where Boss Barker pays his ten power stones as a “down payment” for Ben, with arguing over whether it’s actually ten stones or not. Whatever. He leaves with Ben.

As the aliens/gangsters drive Ben through the streets, we get the backstory. On Earth in the 1930s, a crook named Machine Gun Martin escaped from jail. In his fleeing from cops, he came across a Skrull slave ship, who brought him to Kral. Through him, and then through old gangster movies, the Skrulls of Kral decided to base their entire society on old-timey Earth gangster culture. The exposition is interrupted by an attack from a biplane, equipped with alien superweapons, which tears up the road in front of the car. The Skrulls/gangsters flip a switch, allowing it to fly, and to fight back with its own superweapons.

Ben is brought to the gangsters’ HQ, an old brewery, where Ben is introduced to the Slave-Keeper, who (I guess?) is different from the Slave-Master. He says it’s time for Ben to start his training, with “training” being fighting a giant monster. Ben tries to fight the monster, Taxtor, but his harness is making him too weak. The gangsters/Skrulls toss Ben in a cell, where he discovers he has a roommate. It’s Torgo, who announces he will kill Ben in the upcoming fight. Sadly, this is not the beloved goat-kneed Torgo from Mystery Science Theater 3000, but a big robot-lookin’ guy.

We then cut back to FF headquarters, where Reed deduces that Ben is in space. Because Ben was last seen with an imposter of Reed, Reed goes ahead and assumes the Skrulls have abducted Ben. Reed says to Johnny, “Ben is out there, lad, the captive of a Skrull!”

Unstable molecule: Not sure how Reed jumps straight from learning someone was impersonating him immediately to Skrulls, but, hey, he’s right.

Fade out/Fantastic Fifth Wheel: Sue and Alicia are only seen on one page, and have no dialogue.

Clobberin’ time: In addition to being the center of attention in this issue, Ben makes a classic put-down: “Yer fadder wears space shoes!”

Flame on: I don’t know what Johnny thinks he’s going to accomplish by just flying around randomly looking for Ben, but this desperate act fits his “hot-head” character.

Commercial break: Wrist bands that give you super powers? Is this the first appearance of Quasar?

Trivia time: The Star Trek episode “A Piece of the Action” aired a year before this issue, and it must have been an influence. It’s set on a planet where imitative aliens have adopted a lifestyle based on old-timey gangster fiction.

Fantastic or frightful? Although he’ll stick with the book for a little while longer, this “Gangster movie” arc is often considered Jack Kirby’s last great work on Fantastic Four. It’s certainly imaginative, with the 1930s-era vehicles suddenly flying and blasting each other with futuristic weapons. Stan’s script is a hoot as well, with all kinds of anachronistic gangster-speak. This was Stan and Jack’s last big hurrah, and it’s far from over.

Next: The first rule of Space Fight Club is…