Rewatching the James Bond films chronologically. For Timothy Dalton fans, 1989’s License to Kill is THE ONE — the serious, edgy Bond that everyone wanted after the jokiness of the Moore years. Is it really as great as the Daltonites say? 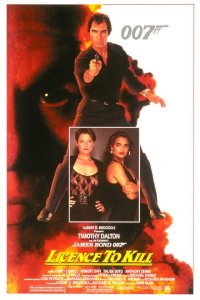 Blond blurb: Bond and his CIA pal Felix Leiter catch Cuban drug lord Sanchez on the eve of Felix’s wedding. Sanchez escapes custody and enacts bloody revenge against Felix. When Bond investigates without permission, his license to kill is revoked. Now, he’s gone rogue, hunting down the bad guys on his own. 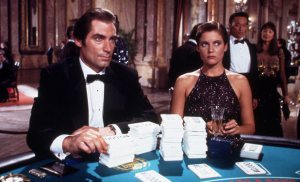 Bond background: We’ve seen Bond’s many romantic conquests, but this movie explores his friendships. Although Bond and Felix have been kept it mostly professional in past films, there’s a real sense in this one that they’ve grown close. (Bond’s tragically short marriage from On Her Majesty’s Secret Service gets a mention.) This, of course, adds to Bond’s bloodlust once he’s out for revenge.

Speaking of which, the whole idea of Bond going rogue is never really explored as much as it could have been. I kept expecting him to be dodging his fellow English agents while pursuing Sanchez, but it never happened. At the end, Bond gets his job back without any real consequence for killing without a license.

Bond baddies: The always-cool Robert Davi plays Sanchez. No opera singing this time, though. Yes, that is a young Benecio Del Toro as his henchthug, Dario.

Bond babes: You’d think there wouldn’t be time for lovin’ with all this revenge business going on, but Bond still finds room to woo one of Felix’s contacts, Pam Bouvier (insert Patty and Selma joke here). She and Bond have the Moonlighting-style banter going on as they track down the villains. Bond later gets close to Sanchez’s girlfriend, Lupe, who wants the abusive Sanchez out of her life.

Bond best brains: Although Bond’s gone rogue, Q still shows up to help him, with a gun disguised as a camera and plastic explosives disguised as toothpaste. Also, to sneak aboard an enemy’s boat, Bond has a convenient mini-sub thing that’s disguised as a manta ray, to throw off the bad guys’ radar. Did Bond just happen to have one of those lying around?

Bond bash-ups: Lots of action in this one. We begin with a confusing helicopter versus airplane chase that ends with Bond and Felix suavely parachuting into the wedding. Then there’s a fight and shootout inside an aquarium, complete with a shark tank and strategically placed electric eels. A big set piece in the middle of the movie starts with Bond deep sea diving, then involved in a water-skiing chase, and then in the air, fighting a guy inside a small plane. A hilarious barroom brawl uses a stuffed swordfish a weapon, and there’s a somewhat random rooftop fight with some ninjas. It ends with a tanker truck chase that feels more like The Road Warrior than a Bond movie, but it features more great stunts and pyrotechnics. 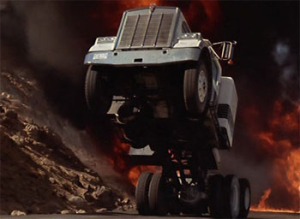 Bond baggage: Everett McGill of Twin Peaks not only appears in this movie less than one year before Peaks, but his character in both is named Ed! I didn’t know the Bookhouse Boys had contacts with MI6. Kidding aside, he’s actually really good in the role of a traitorous agent.

Bond bewilderment: Suddenly, Wayne Newton shows up. His character is running a phony telethon that’s a front for Sanchez’s drug empire. Seriously, Wayne Newton is in this. 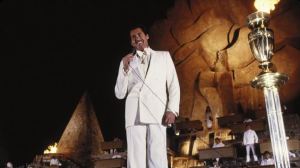 Bond babble: Timothy Dalton comes to this movie with something to prove, playing Bond with a steely intensity. This “he will kill you if you look at him funny” version of Bond is clearly why Dalton’s fans have so embraced him in the role. The plot is kind of stock ‘80s action, all about drug smuggling and revenge, but I like that it’s (somewhat) more grounded and low-key than others in the series.