Re-reading the Fantastic Four comics from the start. Issue #98 is an interesting beast. The fictional Marvel heroes had walked on the moon several times, and then Neil, Buzz, and company went and did it for real. This comic was created to address real life intersecting the fantastical comic world. So, hey, let’s go to the moon!

Although published in April 1970, a caption informs us that this story takes place in July 1969. The opening page has Reed deciphering alien symbols (where’d he get those?) that match what he knows about the Kree aliens. Reed is only able to translate one word, “Tranquility.” Then we get a couple pages of sitcom comedy as Johnny flies around Ben while Ben tries to read the newspaper. The paper catches Reed’s eyes, and he snatches it away from Ben. It’s a story about the moon landing, with “Sea of Tranquility” in the headline. Reed surmises that the Kree have been watching Earth from space, and they know about NASA’s efforts to put a man on the moon.

We then cut to a robotic Kree sentry, living on an island in the Pacific. He flies out over the ocean with a gun that can raise another island out of the water. He searched for a “stimulator” on this new island, which he says can create a map of the moon for him.

At FF headquarters, Reed, Johnny and Ben blast off in a rocket lent to them by NASA. Reed says they’re not trying to race the astronauts to the moon, just seeing to it that the astronauts get there safely. They fly straight to the island, and there’s some action where Johnny burns a runway into the ground before the rocket can crash. They investigate the island, finding it to be an exact replica of the surface of the moon. 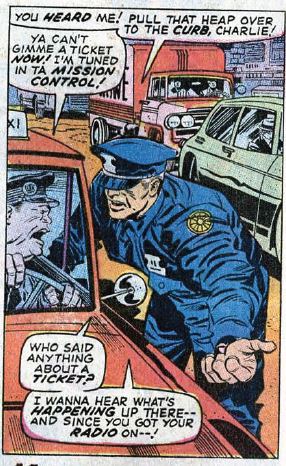 Meanwhile, the NASA rocket takes off from Cape Canaveral, and there are a few fun panels where ordinary folks around the world are all tuned in to watch. Back on the island, the sentry has found his stimulator, a big alien radar-type thingie, but he is distracted by the FF’s arrival. And… fighting! Johnny is no match for the sentry, but Reed does a sweet move where he grabs the sentry and throws him at Ben, who promptly knocks him out. Yay, teamwork.

Reed still wants to know what’s going on, and Johnny helps by finding a hidden entrance leading underground. Ben stays behind to guard the unconscious sentry. Underground, Reed and Johnny find the stimulator, which is tracking Apollo’s progress to the moon. Every time Reed or Johnny try to get close to the machine, it sends out rays that weaken them. In space, Apollo is almost landing on the moon, with no idea the stimulator is targeting them. Reed, in his weakened state, calls out to Ben, who runs to their aid and punches out the machine, destroying it.

Of course the underground caves start blowing up, so Ben gets his friends to safety. The sentry also survives, flying off to fight another day. Finally, up in space, Neil Armstrong sets foot on the moon and says that famous line of his.

Unstable molecule: Reed pursues the Kree message in order to save the Apollo mission, but at the end acts like he has no idea the Kree were sabotaging the moon landing. Maybe he was just being humble.

Fade out: Despite everything that’s going on, Sue wants the whole team to sit down for a family dinner.

Clobberin’ time: Ben makes a lot of jokes about wanting to stay home and watch TV, name-dropping both Walter Konkrite and John Wayne.

Flame on: At the start of the issue, Johnny is at the “air show” to help get his mind of off Crystal leaving him.

Four and a half: Alicia is still around, babysitting Franklin in this issue. Franklin still has brown hair.

Commercial break: Yes, this is a young Arnold Schwarzenegger, a whopping 12 years before starring in Conan the Barbarian.

Trivia time: Well, obviously, this issue is based on the moon landing. Marvel would later publish a mini-series, Marvel: The Lost Generation, which stated the moon landing happened before the Fantastic Four were formed, causing many a continuity headache.

Fantastic or frightful? It’s cute to tie the FF’s adventures into real-life events like this, but other than that, there’s not much there. The plot doesn’t make much sense and the sentry is hardly a threat.