Rewatching the James Bond films chronologically. Here’s a detour: In 1991, we had the animated series James Bond Jr., which ran in syndication for 65 episodes. Yes, this is canon: 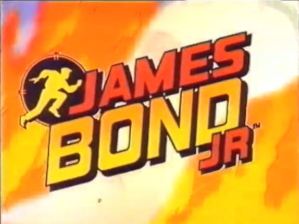 Bond background: Despite his name, Junior is not the son but the nephew of James Bond. Many have speculated that this means Bond has a brother, also named “James Bond.” As far as I can tell, Junior is not an agent in any sort of official capacity. Instead, he just happens to find his way into trouble, and then saves the day. This is kind of like what we’ve seen in the movies, where Bond accidentally uncovers fiendish plots when he’s supposed to be on holiday.

Bond baddies: The many villains work for S.C.U.M., some sort of offshoot of S.P.E.C.T.R.E. They’re led by Scumlord, a shadowy man whose face we never fully see. He’s quite obviously supposed to be Blofeld, as he pets a small white dog instead of a white cat. A lot of villains from the movies make appearances. Jaws and Nick Nack are teamed up to do the “bumbling henchmen” thing, Goldfinger is here, not only with Oddjob but also with his teen daughter, Goldie. Dr. No shows up too, with green skin for some reason.

Bond babes: The show provided a lot of one-time love interests for Junior, with appropriately Bondian names — Lotta DeNiro, Marci Beacoup, Bunny Slope, Hayley Comet, and Terri Firmer, for example. But, really, Tracy tags along on every one of Junior’s adventures, and always seems to be jealous whenever he flirts with the other girls. The writers clearly set her up as “the one” for Junior.

Bond best brains: Each episode has IQ giving Junior a gadget in the first act, which comes into play in the third act. These are usually some weird-looking device, or something built into Junior’s watch. There’s very little of the fun things-that-look-like-other-things gadgets we see in the films. Also, Junior starts out the series driving the classic Aston Martin from Goldfinger, but when it’s destroyed, he gets a brand new red Aston Martin convertible, which we’re told is a gift from his famous uncle. 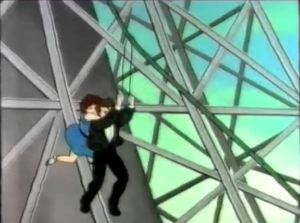 Bond bash-ups: Because it’s made for kids, there’s no fighting or gunplay, so most action scenes are chases and escapes. Typically, Junior has to climb and jump around a bunch of obstacles to get to a computer to throw a switch to make something blow up. This really isn’t the show to watch for awesome action.

Bond baggage: The executive producer for James Bond Jr. was Fred Wolf, who was producing the megapopular Teenage Mutant Ninja Turtles cartoon at the same time, and a lot of characters in both shows are the same stock types. IQ and Leiter are Donatello and Michelangelo, Jaws and Nick Nack are Rocksteady and Bebop, and Tracy, Phoebe and Noseworthy are April O’Neil and her coworkers Irma and Vernon.

Bond babble: I love late ‘80s/early ‘90s TV cartoons, but this is… not the best. Kind of boring and unimaginative, with each episode following more or less the same formula. If it didn’t have the novelty of the Bond name attached, I doubt it would have ever made it to air.