What’s goin’ down: Hanson is still in jail, after failing to prove he was innocent of shooting a corrupt cop, not to mention proving the cop’s corruption. Ioki is still in a coma after a gangland shooting. Although Booker provided the evidence that locked Hanson up, he has second thoughts, and continues to work the case. 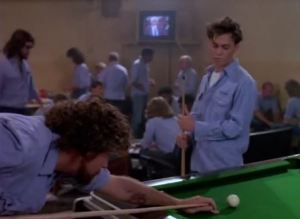 Here’s Hanson: Hanson is constantly under attack in jail, by all the convicts who hate cops. He successfully knocks out two guys in a brawl before the guards haul him away. Later, he ruminates on his time at the academy, remarking about how much he has changed from the goody-goody cop he used to be to the rebel he is now.

Reunited, and it feels so good.

Penhall’s prerogatives: There’s a series of gags about Penhall obsessively recording all the sports games to watch later, only to have the final scores spoiled for him. One of his tapes provides a key piece of evidence in the case.

Book ‘em: Booker is teamed up with the corrupt cop’s partner, who talks about leaving the force to work private security for a big company. This plants the seed for the Booker spinoff, which debuted just after this episode aired.

Undercover blues: Booker gets Hanson out of jail on a 24-hour furlough, where the two of them and Penhall can reunite and crack the case. The trail leads to a billionaire who wants to tear down the gangs’ neighborhoods to build a giant convention center. Supplying guns to the gangs was all part of his sinister plan. Yeesh.

Goin’ to the chapel: The Jump Street chapel has a dartboard on the wall, with Richard Nixon’s picture on it. Topical!

Trivia time: There’s a lot of talk in this episode about local sports team, the Outlaws. Sports fans, who is this? A quick search shows former Outlaws football teams in California and Arizona, a Denver lacrosse team, and a California rugby team. Oh, and the Texas Outlaws Roller Derby, of course.

Jumpin’ or not? Hanson, Penhall, and Booker make a great team in this one, with some excellent three-way chemistry. It’s too bad we won’t really see this again, as Booker leaves for his spinoff, and Hanson is about to drift off into Johnny Depp’s film career. Overall, it’s a nice wrap-up to the three-parter and it satisfyingly closes the book (ahem) on this era of Jump Street.

Next week: Know when to hold ‘em.