Rereading the Fantastic Four comics from the start. For several weeks, we’ve been zipping through the “middle years,” after Jack Kirby and before John Byrne, and now we’ve reached the end. As the saying goes, what a long strange trip it’s been. It’s fitting, then, that we get one last burst of “middle years” weirdness, as famed creators Doug Moench and Bill Sienkiewicz conclude their run on the book.

Issue #225: The FF are at the North Pole, where the immortal Viking Korgon is not so immortal anymore, but instead is dying. His failing powers caused power blackouts all over the world, hence the FF’s involvement. The other Vikings explain that Korgon’s radiation powers are what provide life to them, in their hidden dome. Reed agrees to help, and gets to work in the Vikings’ science lab, in the hopes of finding a cure.

You can’t mention Vikings in the Marvel Universe without Thor, so we cut to Asgard, where Odin has taken notice of this. He sends Thor to investigate this Korgon guy. Reed succeeds in healing Korgon, and the Vikings hold a big party to honor the FF. Korgon replenishes the dome for another hundred years, and then asks Reed to make him human again. This procedure backfires, and Korgon becomes even more powerful. Enraged, he attacks Reed. Thor arrives, and everyone fights for a while. When Korgon threatens to destroy the entire dome, Thor summons Odin’s help. Odin appears and takes away Korgon’s powers. Korgon admits to his people that he’s not really a god, and the superheroes leave the Vikings alone, to work things out for themselves.

Issue #226: A giant robot attacks a train in the Carpathian mountains, stealing a fortune in gold on board. The FF see a news report on them and wonder if their new friends Carson, Genji, and Savage are involved. (The FF recently met these three characters in Marvel’s Shogun Warriors comic.) In a case of perfect timing, Carson, Genji and Savage show up at the Baxter Building. These three pilot the giant Shogun Warrior robots, until this new robot came along and destroyed them. The pilots are now asking Reed for help.

The FF and the robot pilots travel to the Far East, where they find this new robot attacking a city. The FF fight the robot while the pilots find its stash of stolen gold. It finds them, introducing itself as… the Samurai Destroyer. Its pilot is a simple explorer who found the Samurai deep beneath the Earth. He rebuilt and plans to use its power to do anything he likes. Everybody fights the Samurai, while the three pilots get inside it and take out the explorer. They then blow up the Samurai. Without their giant robots, the three pilots decide to go their separate ways, saying you don’t need a robot to be a hero.

Issue #227: Reed gets a phone call from old colleague in Lost Lake, Pennsylvania, about a mysterious meteor that crashed there. He says this is a good excuse for the whole team to use this as a vacation. Upon arriving, the heroes are attacked by a giant pterodactyl, that was once a bird before it was exposed to the meteor. After fighting off the creature, Reed deduces that aliens similar to prehistoric trilobites caused the change.

After more “we’re on vacation” comedy shtick, Reed and Ben fight a wolf transformed into a giant monster wolf by the trilobites. Ben swims to the bottom of lake to find the meteor, and he fights an alien-transformed sea serpent. Unbeknownst to the others, a trilobite attaches itself to Sue. She starts turning into a monster, but Reed appeals to the humanity still lingering inside her, saying he knows she still loves him. This is enough for him to get in close and remove the trilobite. Reed deduces that fossil fuels are the aliens’ weakness (!) and the town returns to normal. Except in the last panel, we see some of the trilobites survived.

Issue #228: Johnny is all excited because he has a date with Lorrie, the girl he met at the racetrack a few issues back. Reed, meanwhile, wants a neurologist to look at Franklin in case his powers return, but Sue is worried Franklin is too young for such a thing. The FF and Franklin and even Lorrie all go to see this doctor, Jankovitz. He wants to use a biofeedback technique to tap into Franklin’s mind. Johnny and Lorrie leave them to it to go on their date, taking the Fantasticar to makeout point!

In the lab, Franklin’s mind produces a ball of energy, which leaves and travels to makeout point, where it zaps some guy picking a fight with Johnny. Fueled by psychic energy, the guy, named Franco, lashes out with Franklin’s subconscious anger. In the lab, Sue switches off Jankovitz’s biofeedback machine, which causes Franco to return to normal. Reed thanks Jankovitz for his help, but says he must take care of his son himself.

Issue #229: While our heroes are enjoying a day out in New York, the city is temporarily enveloped in darkness. Reed investigates, only for a mysterious man to emerge from a portal of darkness in the sky. The guy attacks, but he absorbs light, sound, and mass into his body, making it impossible to fight him. After a lot more fighting, the man communicates with Reed telepathically. He calls himself the Ebon Seeker, and he escaped from the heart of a black hole, and that there is a device on Earth that is killing his world.

Our heroes try to fight back, but the Ebon Seeker blasts them, trapping them in pure darkness. Just when it seems that all is lost, they’re contacted by an angelic woman calling herself Fire Frost. She says she’s seeking the Ebon Seeker in the hopes of preventing a cosmic cataclysm. Also, she’s his lover! 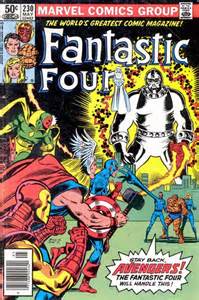 Issue #230: Fire Frost tells the FF the origin of the Ebon Seeker, and it’s so long-winded and convoluted that I’m not even going to try to recap it. Something about aliens and lost souls and a black hole and the ever-expanding nature of the universe… I don’t know. The FF return to New York (how?) and head straight for the Baxter Building and the Negative Zone portal. Reed hopes the Negative Zone’s energies will have a reverse effect on the Ebon Seeker’s dark energy. The Ebon Seeker finds them and attacks. Reed flips a switch, and an entire NYC city block is sucked into the Negative Zone. The Avengers have a cameo for absolutely no reason.

Fire Frost confronts the Ebon Seeker. She convinces him not to destroy, but to accept his fate. He does, and the two lovers fly off into the darkness together. Reed gives a speech about the NASA Voyager probe and its mission to explore deep space, and only after that does he say they’re likely trapped in the Negative Zone… forever!

Issue #231: New Yorkers panic as Reed tries to find a way back to Earth. A snooty construction boss named Lew Shiner leads the rabble in protest. Not far away, a sinister alien named Stygorr has discovered the chunk of New York in the Negative Zone and wants to claim it as his own. The FF fight Stygorr while Shiner tries to demolish the Baxter Building. Through a complicated series of events, Stygorr and Shiner collide into each other. Their positive-versus-negative energies create an anti-matter explosion which returns the NYC block back to Earth. 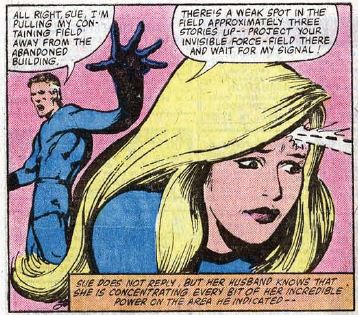 Johnny is reunited with Lorrie. She tells him that he’s a great guy, but she’s just not ready to be serious with anyone. While his teammates celebrate returning to Earth, a lonely Johnny mopes.

Unstable molecule: Reed gives a long-winded “explanation” of how the Negative Zone works, including its relation to sub-space, and the introduction of the Distortion Area, that weird area characters pass through on their way to and from the zone.

Fade out: Sue has something of a breakdown at one point, saying that she always wanted to settle down and have a normal family. She then comes around, saying that although they’ll never be normal, she’ll always love her family.

Clobberin’ time: Ben and Alicia go to a Broadway show (Evita, based on the posters in the background) where he does the self-pity thing, saying she’s too good to be with a monster like him. She tells him how much she loves him, and all the theater-goers give the two of them a round of applause.

Flame on: Johnny’s date with Lorrie also includes taking her to a burger joint in the Fantasticar. He also takes her for a flight using his powers. Lorrie kisses him several times before deciding she’s not into him, which is kind of a jerk thing for her to do.

Four and a half: Franklin sees his parents fighting the bad guys on the TV news. This is a big moment for him, as it’s his first realization that they put their lives on the line and are in danger on a regular basis.

Trivia time: The Shogun Warriors! This was another toy line that Marvel got a comics license for, like their Transformers comics. There were about twenty characters in the toy line, but the main three in the comic were Raideen, Combatra, and Dangard Ace. I guess the license ran out, because the characters aren’t referred to as Shogun Warriors in this Fantastic Four issue, and we only see the pilots, not the mechs. The pilots never appeared again in the Marvel Universe, except for Genji, who popped up in one panel in Avengers #300.

Fantastic or frightful? I was really enjoying these Moench/Sienkiewicz issues until I got to the Negative Zone/Ebon Seeker three-parter, which is confusing to the point of being incomprehensible. I applaud them for giving it a go and trying something new with the series, but it just didn’t work. Still, it’s a good place to bring the middle years to a close, with some real talent on the book attempting something new and experimental. That opens the door for a creator with a signature voice, one whose work on Fantastic Four will help define this comic and these characters for the rest of time.