Re-reading the Fantastic Four comics from the start. This week, with issue #232, the series begins one of its best runs, if not one of the finest runs in all of comics, thanks to writer-artist John Byrne.

After a decade of repetitive, go-nowhere storylines, the latest regime change at Marvel decided to start taking Fantastic Four seriously again. Artist John Byrne shot to meteoric fame after working with Chris Claremont on Uncanny X-Men, which was then experiencing white-hot popularity. Byrne had so much clout that Marvel gave him the keys to the kingdom — creative control over Fantastic Four, once its flagship title.

For most of the 1980s, Byrne wrote, penciled, and inked FF. Byrne often went back to the Lee/Kirby classics and put a modern, more sophisticated take on them. Heavily influenced by sci-fi film and television, his art work has a strong “Spielbergian” bent. Also, as is the case with many comics from the ‘80s, the sex and violence were upped in a big way.

John Byrne’s self-portrait, from the 1980 book THE ART OF JOHN BYRNE, OR OUT OF MY HEAD.

Byrne is also controversial. Never hesitant to speak his mind, comics history is full of stories about who Byrne got mad at and who got mad at him. Any research into Byrne’s history devolves into a bunch of “he said/she said” stories. Therefore, he often rubs fans the wrong way. Me, though? I’m a big, big fan. I’m way more interested in Byrne’s masterful storytelling than I am in discussing whether he is a jerk.

Enough generalities. Let’s talk about issue #232. We begin with Diablo, the evil master of potions, giving a big speech while conjuring clay figures of the FF. It’s a deliberate throwback to Dr. Doom playing chess with little FF figures in his first appearance. Diablo doesn’t say why, exactly, he wants to destroy the FF, but I think we can assume that it’s because they’ve defeated him in the past. Then, there’s a twist, as Diablo’s landlady knocks on the door, and we realize he’s not in some evil lair, but a crappy little apartment. Diablo is disguised as “Mr. Olbaid” (get it?) and he chases her away. Then he summons some creatures he calls his “little ones” and sends them on their way. 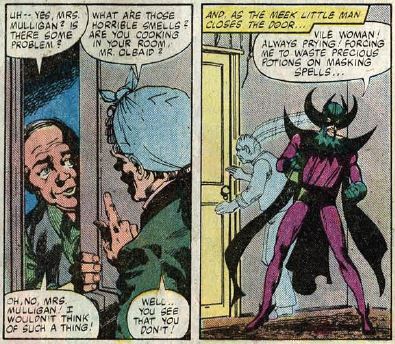 We then check in on Sue, who is getting her hair done at a fancy salon with a, let’s say, flamboyant hairdresser. (Sue’s ever-changing hairstyles will be an ongoing thing during Byrne’s run.) A giant stone monster rises up from under the street. It’s a talkative monster, saying he’s there for Sue and “woe betide those who stand in my way.” Sue tries to get to her FF flare gun, but the monster covers her with quick-drying cement (the cartoon kind that goes rock-hard instantly) before she can get to it.

Then we go to Ben, who is at the movies with Alicia. A water monster attacks him, enveloping him in a giant blob of water, with nothing for him to punch, and threatening to drown him. He tries to dig down into the sidewalk, still not escaping the water. Cut to Johnny, who is in Central Park reuniting with on-again/off-again romantic interest Frankie Raye. She tells him that there is more to her than he knows. Before she can go on, they’re both swept up into the air by some powerful wind. The wind throws them to the ground, and then takes the form of a tornado with a human-like shape.

Next we go to Reed, working in his lab. He’s tracking peculiar energies throughout the city, only to be attacked by a fire monster. He thinks it’s Johnny at first, but then creature introduces itself as the Living Flame, and Reed somehow deduces its fire is “elemental flame” which I guess is different from normal flame. Reed stretches into a bouncing ball shape and escapes the building. He then stretches into parachute shape to float to Central Park, where Frankie sees him and gets his attention. Reed and Johnny do the “switch combatants” thing, with Johnny fighting the Living Flame, and Reed pretending to flee from the tornado monster.

Back with Sue, she uses her force field to expand the space between her and the cement, freeing herself in a total badass moment. She then escapes by sliding along her force fields the same way Iceman slides around on his self-made ice bridges. Ben, still trapped in water, finds his way to a sporting goods store in hopes of saving himself with scuba gear. The water monster responds by trapping a civilian in the water. Fortunately, Sue shows up and traps the water monster in a force field. Now it’s their turn to play the “switch combatants” game, as Ben goes after the rock monster and clobbers it real good.

More fighting! Reed uses a portable generator to electrocute the water monster. Sue traps the air monster in a force field, and then destroys it by compressing it into a single drop of water which makes it no longer exist. (It doesn’t make sense to me, but what do I know about elemental monsters?) Johnny, meanwhile, remembers that fire cannot exist without oxygen, so unleashes his nova flame, burning up all the oxygen around him, destroying the Living Flame.

Back at the Baxter Building, Reed says he knew the monsters were supernatural elementals, and that only Diablo could have summoned them. He picks up the phone and calls someone for some magical help. Later, at night, we see Diablo in some seedy back alley, where’s he’s apprehended by Reed. Diablo has a case with four small statues, which he used to summon the elementals. Reed says the statues are stolen and wanted by Interpol. How did Reed find Diablo? Dr. Strange is also there, having used his magic (the Eye of Agamotto, one assumes) to track the villain down. “Oh the ignominity!” Diablo says. Reed thanks Strange for his help, and then takes off, to take Diablo to the police.

Unstable molecule: Dr. Strange refers to Reed as “Professor Richards.” When did Reed get a teaching gig?

Fade out: There’s much debate on the internet about when, exactly, Sue started to use her force fields for transportation. This might not be the first time, but it announces in a big way that she can use them for getting around, like flying.

Clobberin’ time: The movie Ben and Alicia go to see is The Elephant Man. He gets all teary-eyed, saying “It had its moments.”

Flame on: Johnny starts up his romance with Frankie Raye again, and she’ll be a big part of the book from here on. 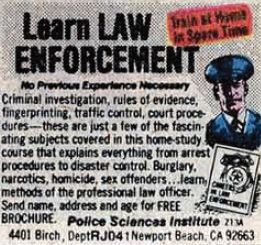 Trivia time: The inker for this issue is credited as “Bjorn Heyn,” which is, obviously, an anagram for “John Byrne.”

This story unofficially crosses over with new material added to Classic X-Men #39, where Diablo, in his disguise as Mr. Olbaid, passes Storm on the street and thinks “Pretty girl!”

Sue’s Liberace-esque hairdresser is named Milo Tindolini. To my knowledge, he never appeared again. Just imagine if he had became a regular Marvel supporting character, the guy who does the hair for all the Marvel heroes.

Fantastic or frightful? Byrne kicks things off with a simple story, but an effective one. Each member of the team gets a moment to shine, using their powers in creative ways, and the elemental monsters are a powerful threat. In short, a fun romp.