Fantastic Friday: You spin me right round

Rereading the Fantastic Four comics from the start. Writer-artist John Bryne continues his run in issue #237 by establishing some subplots and throwing in some sci-fi wackiness. 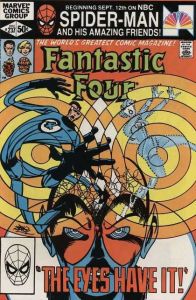 The FF return to headquarters following the events of last issue. Johnny flies off to check in with his new girlfriend Frankie Raye, while the other three members of the team discuss what to do with Dr. Doom, who’s lying there on the roof in suspended animation. (Ben describes Doom as all of his circuits being shorted out.) Reed seals the comatose in a pitch-black stasis field, so powerful that not even photons of light can escape it.

Ben and Alicia have a heart-to-heart, as Ben is still smarting from being able to live a human life (sort of) in Liddleville last issue, and he pity-parties about being a monster. Ben works out using the high-tech weightlifting tech in the Baxter Building, and feels better. Reed checks on some unusual meteor activity in his lab, but Sue insists he leave and go out to dinner with her. To his credit, he actually does go with her this time.

Johnny arrives at Frankie’s apartment, and meets Frankie’s scantily-clad roommate, Julie Angel. Julie, an aspiring actress, leaves the two of them alone. Then Frankie greets Johnny. She’s still in her bathrobe, and in tears. She says she has to show Johnny something, but she’s afraid he’ll think she’s crazy. Johnny promises to help, so she shows him her secret by… peeling off her bathrobe right in front of him! (Wha-hey!) We don’t see what Johnny sees, but the caption tells us, “He knows!” 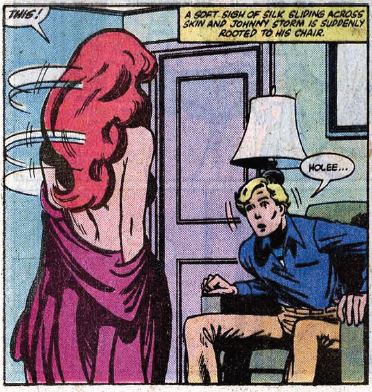 Cut to Reed and Sue horseback riding in Central Park (you can, what, just rent horses there?), only to have their nice afternoon out interrupted by an alarm. Reed follows the alarm to a nearby jewelry store, which is being robbed. He makes short work of the robbers, but then meets their leader, a nine-foot-tall alien woman named Spinnerette. She speaks in an alien language, which causes Reed to lose consciousness. Sue leaves Franklin in an alley (!) and tries to sneak up on Spinnerette. The alien woman can sense her, and knocks her out as well.

Franklin is upset, and energy crackles around him. This affects Spinnerette, knocking her over. The crooks carry her off, and the police arrive just as Reed and Sue awaken. The jewelry store owner says the crooks took what they wanted, but Spinnerette only showed interest in a strange necklace, made of an aluminum-lead alloy that can only be formed in zero gravity (?).

Another alarm goes off, courtesy of Spinnerette and her gang. Reed snatches one of the gang members. He explains that Spinnerette stole a solar cell from a calculator. He then further explains that he and the other guys were originally a bunch of bums, camping out in a junkyard (in Manhattan?) when they were approached by this alien woman. They were the only ones not knocked unconscious by her voice, and she was interested in a silver watch one of them had stolen. Upon hearing this, Reed says, “It all makes sense.”

Reed rushes back to the lab and picks up his universal translator, which we’re to believe he’s had for a long time now, and then back out into New York. They find Spinnerette surrounded by police. Sue traps Spinnerette inside a force field, thinning out the air inside it. This disorients her, and Reed deduces that Spinnerette is “sobering up.” Her real name is Solon Stabilizer, and the high oxygen content in Earth’s atmosphere made her drunk upon arrival on our planet. Reed and Sue take Solon to Long Island (!) where her ship is hidden. She needed the power source and the metal alloy to repair her ship.

Inside the ship, we meet Solon’s fellow aliens, which look just like her. Solon takes a moment to explain that they breed by cloning (TMI!) and that she uses her powers to prevent sickness among her crew in zero gravity. The aliens fly off for the E.T.-style happy ending. We won’t know what’s up with Johnny and Frankie until the next issue.

Unstable molecule: Apparently, Reed has used his universal translator anytime the team has met aliens, and we just haven’t seen it until now. Also, Reed says he plans to meet with the Latverian assembly to deal with Dr. Doom legally, instead of leaving him trapped in the lab.

Fade out: Sue’s getting Reed out of the lab to spend time with her has become less henpecky and more playful. She leaves her civilian clothes on during the fight instead of changing to her FF uniform.

Clobberin’ time: Ben’s weightlifting gizmo is an isometric exerciser, that uses an adamantium rod combined with magnetics to use his own muscle power against him. Sounds legit.

Flame on: On the way to Frankie’s place, Johnny self-reflects, wondering if he has taken his past girlfriends for granted, and whether he is ready for a more serious relationship.

Four and a half: Franklin’s powers re-manifest in a big way, but Sue seems only a little bit concerned about this. Remember when his powers almost destroyed the universe?

Commercial break: Is it me, or are Tarzan, the Lone Ranger, Tonto, and Zorro all the same guy?

Trivia time: According to the Marvel wiki, this is the one and only appearance of Spinnerette. She did, however, become something of an inside joke around Marvel. Whenever the editors would be accused of not creating new characters anymore, they’d respond, “What about Spinnerette?”

Fantastic or frightful? Another Twilight Zone-type standalone story. While the sci-fi plot is kind of hokey, the various character beats in between show just how well John Byrne understands the FF.

Next week: She’s a hottie.