Rereading the Fantastic Four comics from the start. Issue #238 is made up of mostly character moments, so what do they do for the cover? Put Dr. Doom on the cover as a phony stunt, while also loudly announcing that it’s a phony stunt! It’s wacky! 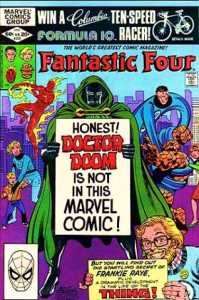 When we last left Johnny, his new girlfriend Frankie Raye was peeling off her bathrobe right in front of him. To many young male readers’ chagrins, she’s not gettin’ nekkid. Instead, she’s wearing a superhero-y gold one-piece with matching gold boots and gloves. She says it’s like a second skin, and it turns invisible when she wears other clothes. Then we get into Frankie’s backstory. She has no memories of her life before age 14, when she woke in a warehouse after an explosion. She had a place to live, and started receiving $1,000 a week in the mail from a Thomas Raye, her father. She never investigated any of this, as some part of her mind just told her to accept this. Years later, when she met Johnny, Frankie was initially repulsed by his fire powers, but was then drawn to him.

Frankie gets overwhelmed with emotion, and flames burst from her body. She’s a female Human Torch! She says, “I remember!” and then bursts through her apartment ceiling and flies out over the city. Johnny pursues her, and gives her a quick flying lesson. She says she’s free and she now knows who she is.

More flashbacks: Thomas Raye was actually Frankie’s stepfather, raising her after her mother died when Frankie was just a baby. Thomas was an angry drunk, and didn’t like the Human Torch, claiming that the “real” Human Torch was dead. When Frankie was 14, Thomas took her to his warehouse, which was full of old chemical weapons he developed to fight Nazis back in the day. Some of the chemicals spilled onto Frankie, engulfing her in flame. This gave her fire powers. Thomas, overcome with grief about this, hypnotizes his daughter so she has a fear of fire, and left her with the special fireproof costume. 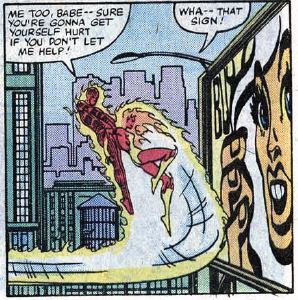 Back in the present, Johnny thinks (but doesn’t say out loud) that Thomas must have really been Dr. Horton, the scientist who created the WWII android Human Torch. Frankie tries to see how high she can fly, only for her flame to short out in the upper atmosphere, where’s there’s hardly any air to burn. Johnny catches her and helps her back down to New York. He takes Frankie to the Baxter Building, in the hopes that Reed can explain her powers further.

At the Baxter Building (which the caption describes as, “that august edifice”) Reed theorizes that the chemicals affected Frankie the same way the cosmic rays affected the FF. After running some tests, Reed says Frankie’s powers are basically the same as Johnny’s, except she can burn longer and control her flame with more precision, while he can fly faster and burn at greater temperatures. Reed then suggests Frankie join the team, jokingly (or not) saying they’re the Fantastic Five now. Then there’s a comedy bit where Ben walks in on Johnny and Frankie kissing. 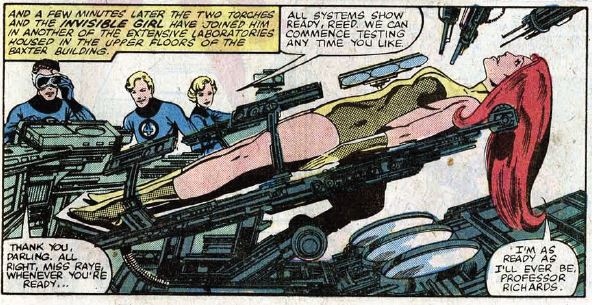 From there, we cut to the town of Benson, Arizona (population 1,783 according to a sign in the background) where a man has died due to extreme cardiovascular distress — he was frightened to death! The doctor his wife/nurse (!) and a hick sheriff talk about how this has been happening all over town. The nurse, Penny, says the only ones who can help them are… the Fantastic Four. Turn the page, and John Byrne has treated us to a one-page pin-up of Sue, in a white blouse and red skirt instead of her FF uniform. What’s really interesting is the eclectic collection of books on Sue’s bookshelf in the background, which include Tom Wolfe, Ogden Nash, The Complete Sherlock Holmes, Harlan Ellison’s Dangerous Visions collection, and even Walt Kelly’s Pogo.

The issue’s only half over! There’s a whole second story. This one begins with Reed rebuilding H.E.R.B.I.E. the robot. (Freakin’ H.E.R.B.I.E. the robot.) The ‘bot has now been reprogrammed to act as Franklin’s new nanny, while also monitoring Franklin in case his mutant powers reemerge. Ben and Alicia show up, and Ben assumes H.E.R.B.I.E. is attacking them again, until Reed cools him down. 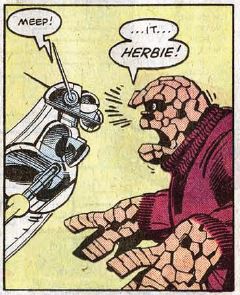 Then, Reed says he’s been hard at work on machine that can provide a new cure for Ben. Reed says that unlike all the previous failed attempts, this time he’s certain he can turn Ben into a human, permanently. Ben is wishy-washy, suspecting that Alicia loves him only as a monster. She assures him that isn’t so, but Sue, in her thoughts, suspects she sees a sense of loss in Alicia’s eyes. Ben hooks himself up to Reed’s machines, and it appears to work at first. Ben reverts back to a human. Only, it doesn’t work. The “power-interface circuit disrupters” short out, and the machine explodes. Ben emerges from the wrecked machine. He’s not human, but instead he’s reverted from his rock-like form back to his “lumpy” form, the way he looked back in the first few issues of FF. The caption tells us, “This time it is permanent!”

Unstable molecule: Thanks to “moveable wall panels,” Reed is able to work on secret projects without anyone, not even his wife, knowing what he’s doing. Kinda creepy. Also, he is again referred to as “Professor Richards.” Where is he teaching?

Fade out: In Reed’s lab, we’re told that Sue powers have grown. She can now turn herself and other objects invisible at the same time, so no more of the rarely-seen “she can’t turn invisible while making something invisible” limitation.

Clobberin’ time: Allegedly, one of John Byrne’s goals for the series was to go back to basics, and revisit the Lee/Kirby classics. We can see this in Ben reverting back to his original self.

Flame on: We get a detailed explanation on how Johnny is able to fly. He says he can fly with just a thought. But, while flying, he constantly has to judge wind currents and thermal pockets in the air around him, or else he will be blown off course.

Fantastic fifth wheel: Frankie’s time an alternate member of the FF is shorter than a remembered. Starting here, she only gets a few issues as one of the team before her big transformation.

Despite being generally hated by both fans and comic professionals, H.E.R.B.I.E. is back. Does anyone else think his redesign makes him look a lot like Crow T. Robot?

Four and a half: Franklin gets along with the new H.E.R.B.I.E. right away, after H.E.R.B.I.E. makes funny faces and promises not to fight with Ben anymore.

Trivia time: In Marvel Two-In-One #50, also written and drawn by John Byrne, we get an explanation as to why Ben’s appearance has changed over the years, in that his body is gradually getting more used to the cosmic rays. His early, “lumpy” look is described as like dinosaur skin, instead of like rock. Despite all the claims that this change is permanent, he’ll be back to his rocky self in just a few issues.

Two weeks pass between the two stories in this issue. During that time, the FF guest starred in Avengers #216, when they tried to help the Avengers battle the Molecule Man, but couldn’t break through MM’s force field.

Fantastic or frightful? What a weird, baffling issue. Frankie’s backstory as a teenage amnesiac doesn’t hold up to any scrutiny. (How was her dad helping her by abandoning her? Did she go to school? Where was the money coming from? Etc.) The plot about Ben’s cure is a nice throwback to the Lee/Kirby days, but it’s kind of a bummer how it sweeps all the drama about his becoming human during the “middle years” under the rug. It makes the FF feel like they’re being written out of character. On the plus side, Byrne’s art is great, and Frankie and Johnny’s flight through New York really captures the exhilarating fantasy of flight.

Next week: Not Aunt Harriet.