Fantastic Friday: Not so annihilating

Rereading the Fantastic Four comics from the start. The Negative Zone saga comes to an end in issue #256, but it’s an end that leaves us with a lot of questions as to what’ll happen next. 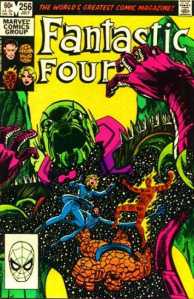 To recap: A dying Annihlus has taken over the Baxter Building, threatening to merge Earth with the Negative Zone, destroying both universes. In the Negative Zone, Reed’s mind is inside a computer, which is animating his body via a high-tech remote helmet. This is hard to describe, but the issue begins with the Fantastic Four standing on a meteor, surrounded by other meteors, in front of an image of Earth projecting into the Negative Zone. Their ship is behind them, which Reed’s helmet is connected to. There’s a little bit of action as our heroes deflect some oncoming meteors. Then, Reed says he has to take a scanner and get even closer to the area where the two universes are merging. 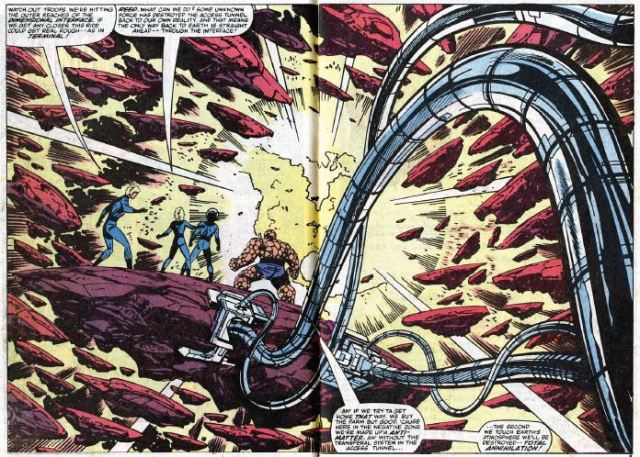 On Earth, Johnny’s new crush Julie Angel and her friend Sharon are on the way to the Baxter Building, concerned about Johnny. Police have barricaded the area around the building, and a passerby informs the two ladies that the Avengers have gotten involved. In the Negative Zone, there’s more business with the Thing fighting off meteors. Reed rejoins his teammates and reiterates that the two universes are about to be destroyed. He says there’s one thing they might be able to do. 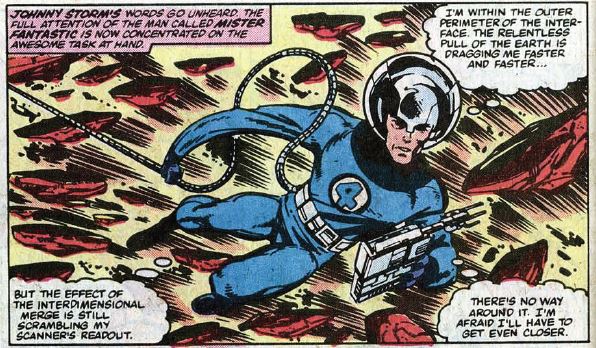 Cut to outer space (in Earth’s universe) where Nova, formerly Frankie Raye and now a herald of Galactus, comes across a Skrull spaceship. She returns to Galactus and tells him that she’s found a source of energy for him to feed — the Skrull homeworld. Then it’s back to the Negative Zone, where Reed has created/summoned a “dimensional analog” of the Baxter Building. The technobabble is impenetrable, but the gist of it is that there’s a slim chance that the FF can get back to their own universe and stop all this. Inside the real Baxter Building, Annihilus senses something is up, just in time for Captain Marvel to appear before him. This is the Monica Rambeau Captain Marvel, remember, and here’s where we pick up the action where Avengers #233 left off. 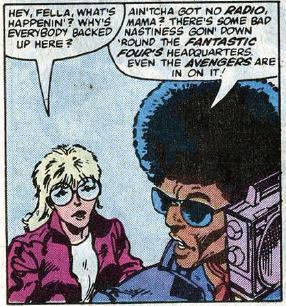 The next bunch of events happens quickly. A console explodes in front of Annihilus (presumably due to Reed’s actions?) which blows off huge chunks of his armor. On the verge of death, he prepares to throw a switch that will destroy both universes manually (no explanation for why he didn’t just do this to begin with). Reed sees a spike of energy and decides now is the time to cross from one universe to the other. At the same time, a “maw” opens beneath Annihilus and he falls into the Negative Zone. He gets sucked into the gravity of a nearby planet and he explodes. 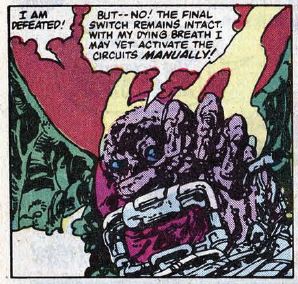 The Fantastic Four make it back to Earth, in the Baxter Building, causing a massive thunderclap that causes a lot of damage. They arrive with… new costumes! Instead of light blue with black, the suits are now dark blue with white. Also, Reed’s mind is back in his body, somehow. Reed confronts Captain Marvel, thinking she’s the villain, but Ben informs him that she’s a friend. Then things take a turn, when Ben discovers a battered and bruised Alicia in the wreckage. He rushes her to the “hanger deck” to get her to a hospital. Sue runs off to find Franklin, while Reed and Johnny put out the small fires that have started. The rest of the Avengers arrive, again picking up where we left off from their issue. Reed performs tests on the unconscious Vision, and says he’ll be all right in time, although Scarlet Witch continues to worry about him. Sue finds Franklin, also unconscious and battered, so the FF and most of the Avengers rush off the emergency room. Captain Marvel and Scarlet Witch stay behind to worry about the Vision.

Unstable molecule: We’re told that Reed tends not to notice danger when he gets too focused on solving a problem, and that’s just what happens when he doesn’t see a meteor coming after him. In his thoughts, he worries about putting on a brave face and not letting the others know how scared he is.

Fade out: Despite his best efforts, Sue can tell how bad things are just by looking at Reed’s face.

Clobberin’ time: When leaping from asteroid to asteroid, Ben comments that he doesn’t have the same high-jumping power that the Hulk does, but he gets by.

Flame on: When Johnny is flamed on, he refers to the yellow fire flickering around him as his “corona.”

Fantastic fifth wheel: She-Hulk appears in only two panels and has no dialogue.

Four and a half: Sue says Franklin was in the lower floors of the building when the thunderclap went off, so his injuries aren’t as severe as Alicia’s. 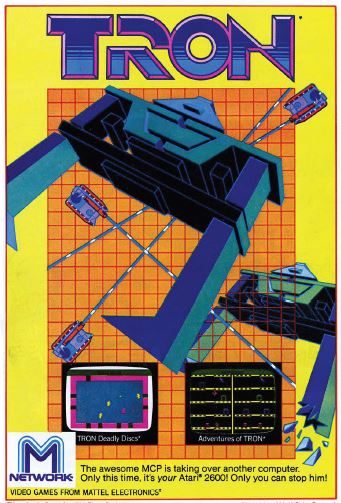 Trivia time: The new dark-blue-and-white uniforms are going to be around for a while, and are usually considered a go-to “alternate” uniform for the team. Some fans argue that the new look is supposed to be black and not dark blue, and that’s an argument that I don’t think will ever be settled.

Ben knows the new Captain Marvel because they’d met in Amazing Spider-Man annual #16. The annual even states that Reed was out of town at the time, so it works that he doesn’t know who she is when he meets her.

The Vision remains immobilized for several more issues of Avengers before recovering, thanks to help from the Titan supercomputer I.S.A.A.C. He exhibits some odd behavior after that, but is back to being a full-time Avenger by the time the Secret Wars happen.

Fantastic or frightful? I’m thinking the conclusion to the Negative Zone saga is not as epic as it could have been. All the sci-tech mumbo jumbo about dimensions and energy fields and anti-matter is dense and unreadable, and why is so much time spent on fighting rocks instead of fighting Annihilus? Fortunately, this issue sets up a lot of story bits that will get paid off later on.