Rereading the Fantastic Four comics from the start. The previous issue ended with a huge cliffhanger — Reed’s mysterious disappearance — with a promise that the next one would provide no resolution at all. It’s truth in advertising, because issue #258 is the famous “Fantastic Four without the Fantastic Four” issue.

So if the main characters aren’t here, what’s the comic about? It’s a Dr. Doom solo story! It’s several months earlier, before the Negative Zone trip. Doom is on his castle balcony, overlooking Latveria, thinking that all is well. Since retaking the kingdom, the economy is booming, and Doom alleges that all crime and hunger in the country have been eliminated. The peasants are shown all smiling and happy.

Doom visits Kristoff, the boy orphaned back in issue #247. He’s taken the kid under his wing. Kristoff lives at the castle and has a private tutor there. Doom takes Kristoff on a tour of the castle, pausing to destroy a Doombot that carelessly let the villain Arcade strike a match against him in Uncanny X-Men #145. We get more “daily life” stuff of Doom governing his subjects and showing how his robots help in and out of his armor. Then his servant Hauptmann informs him that “the project” is complete. 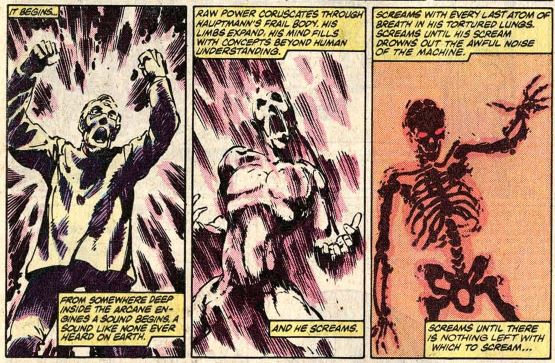 Doom flashes back to the time he stole the power cosmic from the Silver Surfer (in issues #57-60) and how that didn’t go well for him. He’s now built a machine to replicate those same powers. Doom tests the machine by throwing Hauptmann into it, and it kills Hauptmann in a nightmarish manner, zapping him down to his skeleton. Later, Doom is on the computer, searching for someone strong enough to survive the machine. Kristoff innocently suggests Magneto, saying the mutant’s power rivals Doom. Doom explodes with anger, lifting Kristoff off the floor by his neck, shouting “No one rivals Doom!” An injured and terrified Kristoff runs off, just as Doom finds a name that meets his criteria.

Later, in New York, a bunch of Doom’s robots sneak into a hospital. They find a gigantic man, labeled “John Doe,” wrapped head to toe in bandages. (There’s a reference to the Thing’s fight with the Champion in Marvel Two-In-One #96, so we’re meant to think this is Ben, but it isn’t.) They escape with the man and get him to Latveria. There, we learn this mystery man is Tyros the Terrible, former known as Terrax the Herald of Galactus. (We last saw Terrax/Tyros falling into a dumpster in issue #243.) We get two pages of recapping Tyros’ origin.

Doom hooks Tyros up to the machine (we’re not really told why Tyros just goes along with this) and it works. Tyros is once again given the power cosmic, giving him telekinetic-like power over rocks and earth. He remembers his fall from grace, and swears revenge on the Fantastic Four. Doom provides Tyros with a custom-made “sky sled” to fly to New York and unleash hell. Once he’s gone, Doom reveals that he’s tricked Tyros. Tyros has only five hours to live before the power cosmic destroys him. Doom figures that’s enough time to weaken the FF, so Doom himself can deliver the killing blow.

Trivia time: Here we see some of the behind-the-scenes conflict going on between writer-artist John Byrne and X-Men writer Christ Claremont. Byrne didn’t like how Claremont wrote Dr. Doom, so in this issue he establishes that it wasn’t the “real” Doom.

The scene where Doom grabs Kristoff by the neck has been alternatively praised and criticized over the years for its depiction of child abuse.

One page has Doom considering an offer to be Dr. Strange’s new apprentice. This “Strange needs an apprentice” thing was big ongoing plot in Marvel at the time, and pretty much every magic-using character was considered.

Years later, it’ll be revealed that Dr. Doom’s servant Boris, who appears in one panel, is really Zarrko the Tomorrow Man in disguise.

Fantastic or frightful? This issue begins a story arc that is, in my opinion, John Byrne’s best work on Fantastic Four. The big action is coming, but in this issue we get a lot of great character moments for Dr. Doom, Tyros, and even the oft-hated Kristoff. Beautiful artwork, too.

Next week: Rocking and rolling.