Re-reading the original Sherlock Holmes stories. According to legend, Arthur Conan Doyle had mentally checked out of this series by the time he wrote these later ones, and after reading The Three Students, I can almost believe that. 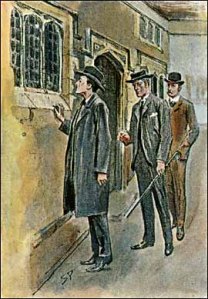 Facts of the case: Holmes and Watson are spending a few days visiting a college campus, having just solved a major case. A teacher begs for their help, saying that someone broke into his office, but didn’t still anything. Holmes investigates, discovering three students about to take an exam for a prestigious scholarship, and he suspects one of them is a cheater.

Great detective: We’re told that Holmes gets grumpy and irritable when away from 221B Baker Street for too long, which seems to forget that he traveled the world during his “great hiatus.”

Good doctor: The man who comes to Holmes and Watson with the case is an old acquaintance of Watson’s, and Watson remembers the man for his nervous, panicky disposition. 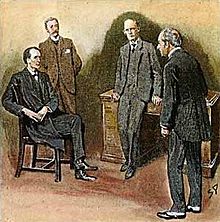 Action hero: There’s a bit where Holmes and Watson disguise themselves as tourists to get into the students’ dorm rooms to look for clues.

Yes, this is canon: The college is described as very famous, with a lot of gothic architecture. Based on this, Holmes fans love to debate whether it’s Oxford or Cambridge. 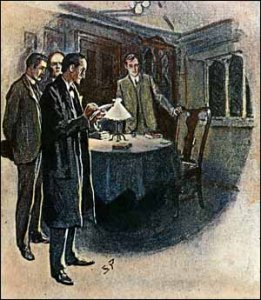 Indubitably: Here’s a story where nothing happens. The mystery is low stakes and the resolution is simplistic. There’s some humor with Watson’s friend in near-hysterics over this, but that’s about it. What’s more frustrating is that that Holmes is supposedly also working on a huge, scandalous case at the same time, which we never see.

Next week: All that glitters.