Reading the Fantastic Four comics from the start. Issue #281 brings the intensity in a big way. 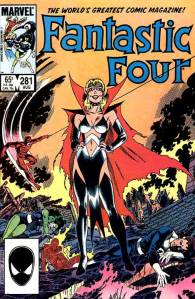 Let’s see if I can recap this: Two villains are inciting hate-fueled riots throughout New York, which is especially bad timing for our heroes, who recently survived the destruction of their home headquarters. What’s more, the villains have taken over Sue’s mind, turning her into the supervillain Malice, and having her defeat She-Hulk. Whew. As the issue begins, the two villains look over the city, which is in flames. The question is, just who are these villains. The shape-changer who previously called himself Unger now calls himself the Hate-Monger, but he’s not the original Hate-Monger who, you might remember, was Hitler. The other villain is clearly Psycho-Man, criminal mastermind from the microverse, except that the comic is still refusing to actually tell us he’s Psycho-Man. Unger says all human prejudices are at their extreme, and he makes a comment about creating a new microcosm, which seems to suggest that these two have a bigger plan beyond just causing riots. Psycho-Man negates that, though, by saying his end game is revenge against the FF.

Turn the page and there’s Daredevil, parkour-ing around the city doing crowd control. He saves an old woman from getting beaten up by thugs, only for the woman to attack him instead of thanking him. Knowing this is more than a riot, Daredevil decides to check in with Avengers Mansion. At the mansion, where the FF are temporarily living, Johnny can’t reach Alicia on the phone, while Reed reinstates that the paper on the “Hate” pamphlets is of alien origin. Jarvis the butler steps in and says the situation in NYC is worsening. Johnny heads out over the city, drawing the flame from all the fires into himself. He spots Alicia (who, let’s not forget, is really Lyja the Skrull in disguise) and goes to her. She was with Sue when a man who appeared to be Reed approached them. Alicia felt a wave of pure hatred so powerful that she blacked out. Johnny flies her back to the mansion, and we see She-Hulk down on the street, recovering from last issue’s fight.

At the roof of Avengers Mansion, Reed has already invented a device that will counter-attack the “hypno-poison” affecting all of New York. Before he can turn it on, Malice (really Sue) attacks, and we get several pages of her fighting Reed and then Johnny. She’s able to fight them easily, with them not realizing she’s using invisible force fields.

Daredevil joins them, asking why they’re fighting an amorphous blob. This is because his radar sense only picks up a large round shape instead of a woman. Reed figures out that DD is “seeing” a force field around Malice, and he figures out it’s Sue. She unmasks, and gives a big speech about how Reed doesn’t respect her.

Rather than keep fighting, Reed decides to play along, pretending to disrespect and ignore Sue. He even slaps her, in a panel that has upset a lot of readers over the years. Her hatred goes to extreme levels, and then she breaks down crying, apparently cured. Sue has no memory at first, but then recovers and recalls just who did this to her. She swears revenge. The story is then concluded in the pages of Secret Wars II #2, in which the rioters disperse, Psycho-Man narrowly escapes, Unger is killed by the vigilante Scourge, and a furious Sue still swears revenge.

Unstable molecule: Reed says his curing Sue by tricking her is merely a guess. That’s one heck of a guess, Mr. Scientist!

Fade out: Sue’s powers are truly invisible in this issue. There are no “see-through” lines to let us know she’s using her power. Instead we only see the results of her using the power.

Flame on: Johnny makes a big deal about being able to control flame he doesn’t generate himself, as he stops the fires in New York.

The Alicia problem: Johnny speculates that the shape-changing Unger might be a Skrull, and Lyja calls the Skrulls “those evil aliens.” Clearly, she’s afraid her former masters will learn she’s switched sides.

Trivia time: The letters page contains a letter from the one and only Stan Lee, who praises issue #273, saying “the mag just keeps getting better and better” and “you keep doing our little foursome proud.”

Fantastic or frightful? After spending 280 issues with these characters, it’s near-painful to see Sue in such a dark place. This arc hasn’t concluded yet, but I believe this is her hitting rock bottom. Beyond that, though, the artwork is stellar and the emotional stakes are powerful, making it a great issue.