Reading the Fantastic Four comics from the start. It finally happened — Marvel continuity got the better of me. In my last regular blog post, I wrote about issue #305, only later to check the Marvel wiki, where I learned the miniseries Fantastic Four vs. The X-Men takes place during that issue. (Between pages 17 and 18, specifically.) That puts Dr. Doom’s appearance in that issue after the miniseries, so… let’s just read it.

We begin with one of Franklin’s dreams, where he sees Reed murder the X-Men and then transform into Dr. Doom. Upon waking, Franklin wants to talk to Reed about this, but his dad’s too busy in the lab. He hangs out with Sue instead, as she unpacks some items she and Reed had in storage since before they were married. (We’re not told exactly where their old stuff was stored.) Among their old junk is Reed’s college journal, which Franklin had seen in his dream.

Cut to the X-Men. Our favorite mutants have been through a lot since we last saw them in Fantastic Four. During the epic Mutant Massacre crossover, a bunch of X-Men were horribly injured and a whole new group joined the team. Magneto is still leading the team in his “I’m a good guy now” phase, and the team has relocated from New York to the science lab in Muir Island, Scotland. Pyslocke, Havok, Longshot, and Dazzler are the new X-Men, while Nightcrawler and Colossus are in comas. Most important to this story is that Shadowcat, a.k.a. Kitty Pryde, was also injured during the massacre, messing with her walk-through-walls power so that now she’s in a constant intangible state. After several pages establishing all this, Magneto states that a device invented by Reed might be able to cure Kitty’s condition. The other X-Men, however, fear that Reed won’t help, thinking that Magneto is still a criminal.

At Four Freedoms Plaza, Sue confronts Reed. She’s read his college journal and found something she didn’t like. Before we can learn what, we then cut to a library in Greenwich Village, where She-Hulk is studying the trial of Magneto (from Uncanny X-Men #200) for an upcoming presentation at her old school, and Ben is studying to re-certify his pilot’s license. They’re interrupted by a series of explosions in the neighborhood. Magneto shows up and helps them save a building from collapsing. At HQ, the FF still don’t trust Magneto, even as he pleads for their help to save Kitty. Sue is still mad at Reed, so she stays behind while Reed, Ben, Johnny, and She-Hulk take Magneto back to Muir Isle.

Upon arriving, Reed is overcome with self-doubt, because what was revealed in his old journal. Because of this, he tells the X-Men they can’t use his machine to cure Kitty. This is called Fantastic Four vs. the X-Men, so of course a fight breaks out. Wolverine is, as always, the center of attention, first he knocks out Johnny (it looks like he stabs Johnny, but the comic later says he merely “elbowed” Johnny) and then threatens to slice n’ dice Reed. Storm gets burned by Johnny’s flame, Rogue knocks Ben out by temporarily absorbing Ben’s powers (and his memories), and Psylocke invades She-Hulk and Johnny’s minds. The fight ends when the X-Men’s scientist friend Moira McTaggert steps between Wolverine and Reed.

As both sides lick their wounds, Reed and Storm agree that both teams should go their separate ways. Then, a stranger the X-Men rescued from drowning walks up to everyone. Turns out this guy is a robot. And not just any robot, but a Doombot. Dr. Doom speaks to everyone through the ‘bot, saying that he will do what Reed refuses to, and save Kitty himself. “My reasons are my own,” he adds. Reed implores the X-Men not to deal with Doom, but Storm insists that the FF no longer stick their noses in the X-Men’s business.

Back at Four Freedoms Plaza, Ben and Johnny have read Reed’s old journal by now, and the truth comes out. Reed know (or at least suspected) that the FF’s original spaceflight might give them all superhuman powers. He went ahead with the flight after reading a paper by Dr. Xavier about the emergence in mutants among the populace. Ben doesn’t like hearing this, and neither do Johnny or She-Hulk. All three walk out on Reed. Meanwhile, not all the X-Men are cool with making a deal with Dr. Doom, but Storm steps up and says she’ll take responsibility, that she’s willing to do whatever it takes to save Kitty. The rest of the X-Men then agree to back her up.

The X-Men temporarily relocate to Dr. Doom’s castle, where he cures Storm’s burn as a show of good faith. Kitty decides that she would rather die than let her friends the X-Men be in Dr. Doom’s debt. Before she allowing lets her molecules dissipate (or something like that) Franklin appears to her in his astral projected form. In this form, he can communicate with Kitty and even touch her. He tearfully convinces her to stay. 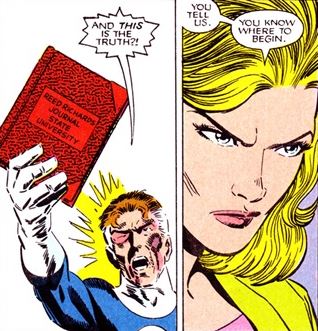 In New York, Reed doubts himself, wondering why and how he repressed the memory of writing this journal. Ben drowns his sorrows in a Yancy Street bar, and then saves a baby from a fire, which helps him put things in perspective. Similarly, Johnny has a heart-to-heart with Alicia about how he always has to keep his fire under control for fear of accidentally burning someone. He flies around an NYC pier to further hone his skills. Reed and Sue then have a heart-to-heart, with her telling him that the young man who wrote the journal is no longer the man he is now. The rest of the FF reconcile, and Reed says they will all go to Latveria to save Kitty.

Dr. Doom begins the procedure to try to save Kitty. The FF arrive in Latveria, and the X-Men are hostile to them, thinking the FF is there to stop Doom. Another fight breaks out. One punch from Ben knocks out Wolverine, and Rogue snuffs out Johnny’s flame by tossing him into some snow. With use of a force field, Sue takes out Rogue, Havok, Dazzler, and Longshot simultaneously. Magneto threatens to destroy the FF’s plane when Franklin, who was on board, stops the fight, asking whether they’re more interested in fighting each other or saving Kitty. 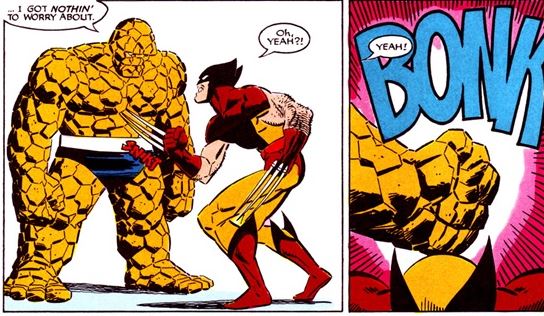 Both teams enter the chamber where Doom is trying to save Kitty. Doom makes a big show about how if he can pull this off, then it’ll finally prove the world that he’s better than Reed. Reed sees an error in one of Doom’s displays, and insists that the machine be shut off. Reed tries to save Kitty, but is still wracked with guilt over the journal. After much drama, Reed decides to fight through his personal anguish and make the attempt to save Kitty.

Cut to later, when we’re told (but not shown) that the procedure was a success, and that Kitty is now slowly returning to normal. Reed and Magneto shake hands, apologizing for misjudging one another. Sue then deduces that the journal is fake, created by Dr. Doom to undermine Reed’s confidence. Everyone braces for a fight, but Sue says now that Doom’s treachery is exposed, the battle is already over.

Unstable molecule: What does it say about Reed that this old (and fake) journal shakes him to his core like this? I suppose this can be interpreted as part of what’s driving him to take a break from superheroing to spend more time with his son.

Fade out: Still think Sue isn’t the most powerful member of the team? She wipes out four X-Men in a single blow. This includes Rogue, one of the team’s heaviest hitters.

Clobberin’ time: A lot of fans have disliked how Ben is able to knock Wolverine unconscious with a comedic bop to the head. Try to remember that this was before Wolverine achieved the godlike “ultimate badass” status he enjoyed in the late ‘90s/2000s, so it was possible for the ol’ canucklehead to get roughed up in a fight.

Flame on: It’s been established that being doused with water no longer stops Johnny (he just goes ahead and flames on again) so it’s incongruous that getting thrown into a pile of snow defeats him so easily.

Fantastic fifth wheel: There’s a lot of talk about how She-Hulk puts her “4” uniform back on even though she’s back with the Avengers full-time now. That makes this miniseries her official farewell to the FF (even though she’ll be back).

Four and a half: Franklin previously befriended Kitty and the X-Men when the Power Pack kids got involved in the Mutant Massacre. Including the kids in the megaviolent crossover was controversial at the time, and you do have to wonder why they don’t have PTSD now. (Maybe Julie Power does, because she joined that support group in Runaways and The Loners.) Also note that Franklin appears in his Power Pack uniform in front of Kitty, but not his parents, so he’s still doing the secret identity thing.

The Alicia problem: Alicia, who is secretly Lyja the Skrull in disguise, only appears in one scene, but her dialogue is loaded with double meanings now that we know she’s a Skrull. She commiserates with Johnny about his having to be in control of his powers all the time, because she has to maintain her disguise all the time. She also talks about learning from mistakes and changing for the better, which recalls her change of heart from being a spy infiltrating the FF to genuinely falling in love with Johnny.

Commercial break: Each issue of this mini was 32 pages with no ads (and a jacked-up cover price). It did get its own trading card: 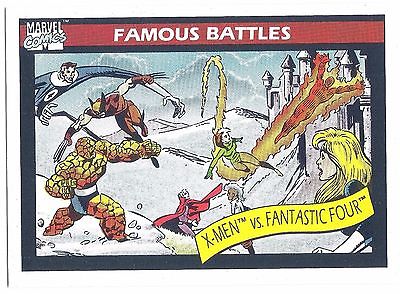 Trivia time: Kitty, Colossus, and Nightcrawler all return to normal pretty much right after this, during the Fall of the Mutants crossover. Kitty and Nightcrawler then leave the X-Men to co-found the England based Excalibur team. Allegedly, writer Chris Claremont tried several times over the years to have Kitty join the Fantastic Four, but it never happened for whatever reason.

Fantastic or frightful? There’s a lot to like about this miniseries, but it has a lot of problems, too. The entire fight could have been avoided if Reed and Magneto had just talked for a minute before exchanging blows, which is frustrating. Still, the big drama and big emotion we all remember from Chris Claremont’s X-Men is in full force. So it’s not just fighting, but huge swells of operatic emotion to go with it. As a kid, I never liked artist John Bogdanove because his work wasn’t as flashy as others, but I’ve grown to like his work more since then, especially his expressive faces. Even Dr. Doom is expressive! The good outweighs the bad.