Fantastic Friday: Catching up with annuals

Reading the Fantastic Four comics from the start. This week, I’m at annual #20, which is a direct continuation from the cliffhanger at the end of #305. Except, I stopped reading the annuals a while back simply because they’re really long, and a pain to summarize in a blog post. No getting around it now, though. First, here’s a quick rundown of the annuals I haven’t yet covered, and then we’ll get into the meat of annual #20.

Annual #7 repeats issue #1 and annual #2 in their entirety, with no new material except for the cover.

Annual #8 reprints annual #1 in its entirety, adding some pinup pages of the FF and their villains, and a new cover.

Annual #9 reprints issue #43, annual #3, and a Human Torch solo story from Strange Tales in their entirety, with no new material except for the cover.

Annual #10 reprints annual #3 (again!) and annual #4 in their entirety, with no new material except for the cover.

Annual #11 has the FF traveling back in time to team up with WWII superheroes the Invaders to battle Nazis. Note that this takes place during that short time during the ‘70s when Ben was human, and wearing that robotic Thing suit to join the team. 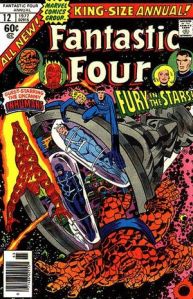 Annual #12 has the FF and the Inhumans teaming up to fight Thraxon the Schemer and the Sphinx. There’s a funny subplot about the Hollywood making a Fantastic Four movie and having the movie be nothing like the FF. Prescient!

Annual #13 has the FF stopping the Mole Man from abducting people from the surface world to rebuild his underground kingdom.

Annual #14 has the FF visiting the magical town of New Salem, where they save the world from an evil cult. Franklin’s magic-using nanny Agatha Harkness plays a prominent role. 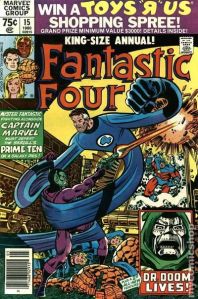 Annual #15 has the FF and Captain Marvel (a.k.a. the alien Mar-Vell) teaming up to fight some Skrulls. A backup story reveals how Dr. Doom recovered from his defeat in issue #200.

Annual #16 has the FF meeting the alien Dragonlord, who meets and becomes best pals with FF villain Dragon Man. Art by Steve Ditko!

Annual #17 has the FF investigating strange goings-on in a small town. Remember back in issue #2, when Reed hypnotized those Skrulls into thinking they were cows? Now the milk from those cows has turned this town’s populace into shape-shifters! Written and drawn by John Byrne!

Annual #18 has cosmic beings declaring the long-running Kree vs. Skrull conflict to be settled by a single warrior of each species in a one-on-one fight. Their final battle is to take place on the moon. Unfortunately, this is also happening while the FF are there for Medusa and Black Bolt’s wedding. My description’s not doing this one justice, as it’s some terrific space opera. 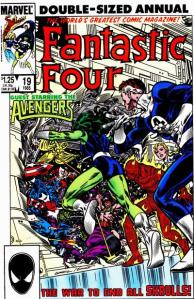 Annual #19 has the all-powerful but childlike alien Infant Terrible return to Earth, pursued by Skrulls (so many Skrulls in these annuals). The FF and the Avengers team up to stop the Skrulls.

Now we’re finally caught up with annual #20. Just after Crystal decides to rejoin the team, Dr. Doom shows up at headquarters, demanding that the FF turn Franklin over to him. Doom explains that once a year (!) he battles Mephisto in an attempt to free his mother’s soul from the afterlife. Because Franklin defeated Mephisto when in Mephisto’s realm (in issue #288), Doom wants the kid to do it again. (Remember that Franklin has godlike, world-ending superpowers when he’s in Mephisto’s realm.) The FF refuse, so Doom leaves. The FF’s building is then immediately attacked by “tau neutrino” robots. After much fighting, one of the robots abducts Franklin.

Dr. Doom explains to Franklin that Mephisto has his mother’s soul, so Franklin agrees to help Doom. While the FF mount a rescue, one of the robots frees Kristoff, the little kid brainwashed to think he’s Doom. Arriving in Latveria, Doom takes Franklin to an underground chamber to begin the Mephisto-summing ritual. Kristoff arrives next, sneaking into Doom’s castle and donning an adult-sized suit of Dr. Doom armor. Then the FF arrive, and they chase Kristoff around Latveria’s underground tunnels for a while.

Doom confronts Mephisto and reveals his true plan. He doesn’t want Franklin to defeat Mephisto. Instead, he offers Franklin’s soul to Mephisto in exchange for Doom’s mother. Kristoff and the FF interrupt the ritual and everybody fights. Mephisto draws Reed and Franklin into his realm, only to withdraw once Franklin threatens to destroy him again.

Back on Earth, all the Doombots are unsure whether Kristoff or Dr. Doom is the real Doom. Because Dr. Doom failed in his mission, the Doombots declare him an imperfect copy, and he’s forced to leave as Kristoff becomes the new leader of Latveria. Our heroes are reunited. Upon leaving Doom’s castle that remark that no matter what happens, no one will ever defeat the Fantastic Four.

Unstable molecule: Reed fakes being injured to fool Mephisto. You’d think an all-powerful demonic entity would be smarter than to fall for that.

Fade out: Aside from throwing her force fields around during the fights, Sue does very little during the annual. This is strange considering her son has been kidnapped.

Clobberin’ time: There’s a lot of talk about Ben being the new team leader, with others asking him to call out the shots during battle, even though Reed is still right alongside the team.

Flame on: Johnny and Crystal spend a lot of the annual fretting about being exes who also teammates, with each saying it might be harder than they both realized.

Fantastic fifth wheel: Crystal says Doombots are powered by plutonium, and this makes it “child’s play” for her to shut them down with her elemental powers.

Trivia time: Dr. Doom reveals he’s been secretly spying on Franklin for some time while planning this, to the point where he knows about Franklin’s membership in Power Pack while Reed and Sue still don’t. Doom even knows enough to call Power Pack’s villainous Snarks by their real name, the Sn’rx.

Fantastic or frightful? Annual #20 has a lot of big drama and it positions Kristoff as a major player in the Marvel Universe, but it still doesn’t work as well as it should. It’s more interested in robot fights and Mephisto weirdness than in whatever emotion might be under it all.

Next week: After Carol, before Kamala.