Watching all the movies on the Warner Bros. 50-movie box set that I bought for cheap. The random number generator takes us back all the way back to movie #2 this week, for 1935’s Mutiny on the Bounty. Land ho! 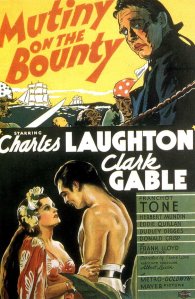 Here’s what happens: Aboard the HMS Bounty, the whipping-obsessed Captain Bligh is cruel and heartless to his men. After experiencing the island delights (and lovely ladies) of Tahiti, first officer Fletcher Christian plots to seize control of the ship and make a new life for himself in the tropical paradise. Caught in their conflict is midshipman Byam, who just wants to do his duty.

Why it’s famous: This is actually the third movie based on this story (!), but it’s the biggest and most grandiose. 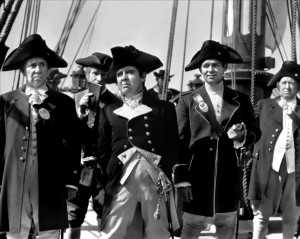 Get your film degree: There’s a long sequence at the start where the movie takes time introducing each character as he boards the ship. It seems to me that most of today’s screenwriters would skip all this, jumping ahead and opening the movie with Bligh whipping someone, with only a few succinct lines of dialogue establishing each character. I wonder if today’s movies could benefit from the old-school approach to character introductions.

Movie geekishness: The plot in Mutiny on the Bounty is actually quite slim, which leaves the movie a lot of breathing room for shots of ships at sea, lush tropical islands, and Bligh’s whippings. All this must have been quite the novelty for filmgoers in 1935, with bigger production values than most other movies of the time.

Thoughts upon this viewing: Captain Bligh is such a jerk! Sure, Clark Gable has the movie star thing down to a science as Christian, but it’s Charles Laughton as Bligh who makes the movie. He’s the villain you love to hate — slimy, rotten to the core, and even a little cowardly. Yet when he has to survive at sea with little resources, he becomes kind of a badass. The movie’s worth seeing just to see him in action.

Next week: Mind if I test drive your Audi?