Reading the Fantastic Four comics from the start. The rambling, meandering storyline we’ve been following for the last 7 issues comes to a close in the double-sized issue #319. 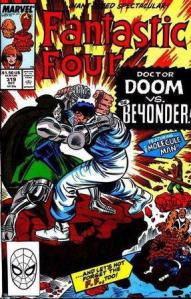 To recap: Dr. Doom has temporarily joined the Fantastic three — Ben, Johnny, and the Sharon Ventura Ms. Marvel — on a journey into the Negative Zone, to investigate godlike aliens named the Beyonders (mentioned in an old Marvel-Two-In-One issue) who may or may not be related to the Beyonder from Secret Wars. This issue begins aboard the FF’s spaceship, where Ben and Dr. Doom argue about who’s in charge (Doom has enacted his rarely-used status as an alternate member of the FF). The ship approaches a swirly space thing that Doom calls the Crossroads of Infinity. He then says that when the Beyonder died, his power exploded through the Crossroads to create a new universe. Ben isn’t convinced that this is the same Beyonder as the Two-In-One Beyonders. Sharon, meanwhile, has heard the others speak with awe and fear of the Beyonder, and is concerned about encountering him. There’s a quick cut to New York, where the Molecule Man has recovered from Doom trying to kill him last issue, and then to Alicia (who is secretly Lyja the Skrull in disguise) at FF headquarters, losing track of the FF’s ship. 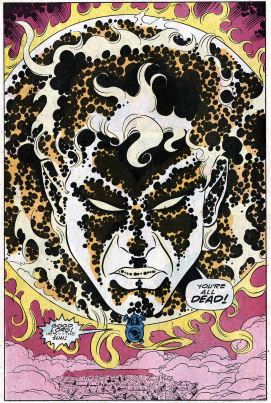 The ship passes into the crossroads, and through a bunch of different universes, and getting a brief glimpse or Reed, Sue, and the Silver Surfer in some sort of trouble. They’re not able to turn back and help them, though, pressing forward into another universe that looks a lot like Earth. Johnny thinks they’ve circled back home, but then the face of the Beyonder appears in the sun.  Doom explains that it’s not just the sun — everything in this universe is made of the Beyonder. (So, are they breathing the Beyonder? Questions like this go unanswered.)

The Beyonder teleports everyone down to the planet and appears before them in his metallic “superhero” outfit he wore briefly in Secret Wars II. There’s a multi-page recap of the first Secret Wars and Fantastic Four #288, and then Doom demands the Beyonder give him power to retake Latveria so he can be “whole again.” Doom almost convinces the Beyonder to do this by saying the Beyonder knows what it’s like to be unfulfilled.

Then Ben interrupts, demanding to know where the Beyonders are. The Shaper of Worlds says the Beyonders exist outside of space and time in a “lightless universe” where they observe humanity, wishing it well, and wanting humans to grow to their full potential. The Beyonders influenced Earth in many ways, most notably the Cosmic Cubes, devices which grant their users the power to control reality itself. The lab accident that gave the Molecule Man his powers was also tapping into the Beyonders’ influence. This same accident is what drew the Secret Wars Beyonder to notice Earth, where he experienced desire and unfulfilment for the first time. Therefore, in a very roundabout way, the Two-In-One Beyonders created the Secret Wars Beyonder by creating the Cosmic Cubes. (I think.) 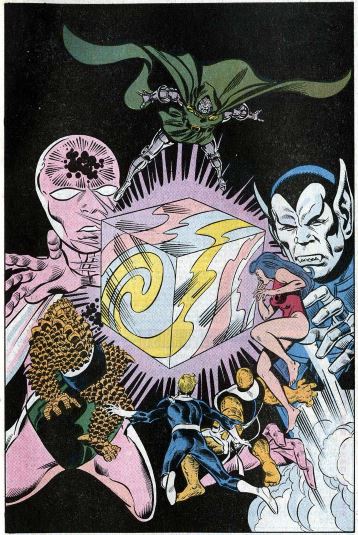 Ben talks about losing his relationships with both Alicia and Tariana as a result of the Secret War, but now his love for Sharon makes him “whole.” Similarly, the Molecule Man says that despite all his power he became “whole” with his love for Volcana. But so much for that, because the Beyonder realizes that his unfulfilment comes from how he does not have a person in his life who is his equal. The Molecule Man agrees to be that person. He and the Beyonder merge into one another, transforming into a single cosmic cube. Okay. 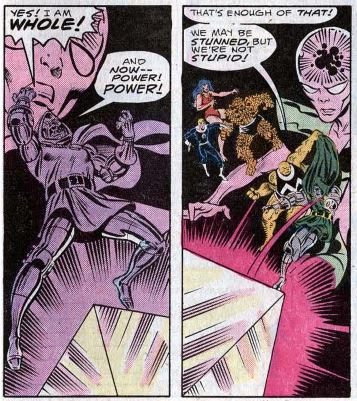 No longer defeated Dr. Doom touches the cube and demands his “missing memory” that will allow him to retake Latveria. He then tries to steal the cube’s power, but Sharon stops by grabbing him and pulling him away from the cube. Kubik teleports the FF, Doom, and Volcana back to Earth. Doom storms off, saying he fulfilled his end of his deal with the FF, and Ben lets him go. Sharon comforts Volcana, and Volcana says she’ll survive, that “was always stronger.”  Johnny checks on Alicia, leaving Ben and Sharon alone, and all this ends when Ben says, “And to think it all started in the tunnels of the Mole Man.”

Unstable molecule/Fade out: What was with that Reed and Sue cameo? In Silver Surfer #15-17, the Surfer enlisted Reed and Sue to help save Galactus, who was dying after he tried to eat the Soul Gem. This then led to a battle with the In-Betweener.

Clobberin’ time: Ben touches Dr. Doom at one point, and gets an electric shock from Doom’s armor. This time, however, it doesn’t hurt Ben because Ben in his spikey form is that much stronger.

Flame on: Johnny asks whether cosmic grandeur can change Doom’s perspective at all, harkening back to Johnny’s newfound maturity after traveling across the galaxy during the original Galactus trilogy.

Fantastic fifth wheel: Sharon’s role in this story is definitely the “ordinary person caught up in cosmic weirdness,” in some attempt to keep things grounded.

I’m not clear on what this “missing memory” is that Dr. Doom says he needs in order to re-take Latveria. I suspect it’s not something specific, but merely a McGuffin to get him involved in this story.

The Alicia problem: Is it safe to assume that Lyja’s training as an outer space spy helped in her monitoring the Negative Zone portal?

Commercial break: A new and exciting game you play straight up!

Trivia time: Who’s this Kubik guy? He’s a life form that evolved out of the original cosmic cube. By this point in Marvel history, there’s a bunch of cosmic cubes to be found.

At the end of Secret Wars II, the Beyonder’s death created a new universe. Many believed this to be the beginning of Marvel’s New Universe line of comics, but Marvel editorial later alleged that wasn’t the case. In this issue, we finally see the Beyonder’s universe, where he still lives.

Don’t go around thinking this is the Beyonder’s real origin story, because it’ll later be re-written at least two more times. It seems every writer who takes on the Beyonder just has to dream up a new origin for the poor guy.

Fantastic or frightful? What an absolute disaster of a comic book. The story goes that Marvel brought back the Beyonder for this story to give him a proper send-off. Originally, he died while trying to become human, which seemed to me like a perfectly good end for him. Merging with the Molecule Man to create another cosmic cube? How is that better? If you’re not that interested in continuity and just want some superhero action, the issue still disappoints, because it’s mostly alien gods standing around explaining everything. Just the worst.

Next week: A real fixer-upper.