Fantastic Friday: Attack of the clones

Reading the Fantastic Four comics from the start. In the last issue, a villain created clones of our heroes. In issue #329, we see the plans are for those clones. 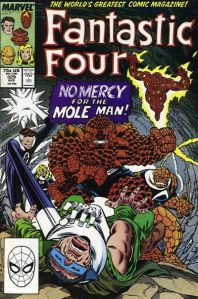 We begin in the middle of the story, with the FF in Reed’s lab, preparing for their next adventure. Alicia (who is secretly Lyja the Skrull in disguise) seems perplexed by what is happening. Reed is bossing the others around, Sue dotes on his every word, and Ben has not only mutated back to his “spikey” form, but he has a bad attitude, beginning most of his statements with “Bah!” Reed announces that the FF are going to travel to Monster Island and capture the Mole Man. Alicia points out that the Mole Man was abducted by lava men (in issue #313) and Monster Island was destroyed (in issue #296).  Reed says that’s no matter, as his science genius can raise an island.

Cut to our villain, Aron the Watcher, who is in his new hideout in Jasper National Park in Alberta, Canada, which he describes as a wilderness so remote it is “hard to reach by human means.” He reveals that the FF we’ve been reading about are the FF clones he created, and he has the real FF trapped in suspended animation, along with their foes the Frightful Four. He further explains that, as a fugitive Watcher, he is limited in the use of power to stay hidden from other Watchers. His fake FF, however, are free to do his bidding however he wishes.

The fake FF fly a Fantasticar out to the ocean, where Reed does indeed raise the island to the surface and restore it to its former glory. From this point, most of the issue is a remake/homage/satire of Fantastic Four #1, repeating a lot of the same dialogue and story beats from the FF’s first adventure on the island. Our “heroes” occasionally stop to reflect on how their memories of everything that’s happened between then and now feel like a dream. 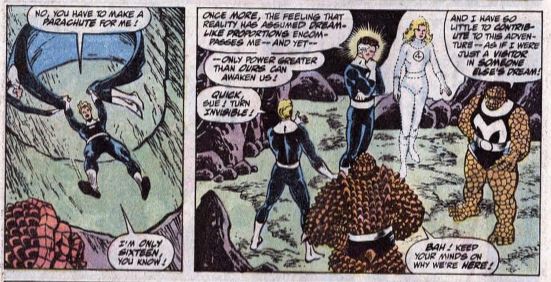 Speaking of dreams, we cut back to Aron, who is observing the dreams the real FF are having while in stasis. In Ben’s dream, Sharon dumps him because he’s human now. In Sharon’s dream, Ben dumps her for exactly the same reason. The caption informs us that these dreams will go on.

At Monster Island, the fake FF confronts the Mole Man, who says he’s had a change of heart following their last few encounters. He’s left his selfish and cowardly ways behind, and in now working for peace, fighting to unite all the world’s secret underground kingdoms. Still believing that they’re in issue #1, the fake heroes attack the Mole Man. It appears that the Mole Man and his various monsters are about to win the fight, until an energy beam shoots down from the sky and wrecks the island. The fake FF escape, while the Mole Man gives a big speech about how his faith in humanity is betrayed, and he hates the FF even more than ever now.

As the fake FF are escaping, fake Reed wonders why this adventure doesn’t conclude with an awesome explosion, only for the island to then explode. Back in Canada, Aron reveals that he’s the one who fired the energy beam at the island, so that his version of the FF could win the fight. He says his new FF will still take some work.

Clobberin’ time/Fantastic fifth wheel: The only time we see the actual FF in this issue is during the dueling dream sequences of Ben and Sharon. This appears to foreshadow Sharon’s eventual leaving the team, even though that still won’t be for a while.

The Alicia problem: Although she hasn’t been cloned, Alicia/Lyja seems written in an early 1960s style as well, being very naïve and unknowledgeable about the FF. Perhaps we can theorize that Lyja, a trained spy, can tell something is up, and she’s merely playing along.

Commercial break: This ad is way ahead of its time, in that the cool fantasy hero could be either male or female.

Trivia time: Monster Island, located near Japan, was created by Kro, an enemy of the Eternals, before the Mole Man took it over. Monster Island tends to get destroyed a lot, only for characters to visit it later to find it restored with no explanation. According to the Marvel Super Heroes role-playing game, Monster Island is longitude 136, latitude 40 north.

Fantastic or frightful? The idea here to play around with how the FF of issue #1 would interact with the Marvel Universe of today. This story only sort of does that, though, because we’re at Monster Island the whole time. The better moments are the ones that poke fun at the plot holes and overall goofiness of those early issues. It doesn’t really go anywhere, though, ultimately feeling like filler.

Next week: Sweet dreams are (not) made of these.