Watching all the movies on the Warner Bros. 50-movie box set that I bought for cheap. This week the random number generator has the stuff that you want and the thing that you need as it landed on The Bodyguard. 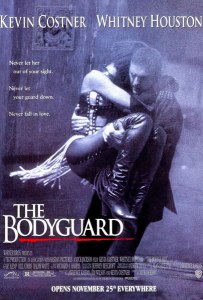 Here’s what happens: Former secret service agent Frank Farmer has a reputation for being the best, so he’s hired to protect celebrity singer/actress Rachel Marron, who has been targeted by a psycho stalker. While Farmer clashes with Rachel’s staff, he lets his guard down and has a whirlwind romance with Rachel, while the stalker doesn’t let up.

Why it’s famous: The song, of course! Whitney Houston sings for the back row, belting out “I Will Always Love You” with superhuman lungpower. A lot of movies sell a soundtrack, but this is one case where the soundtrack sold the movie. 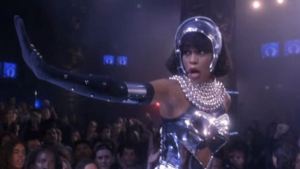 Get your film degree: Writer Lawrence Kasdan allegedly wrote the first version of the script way back in the ‘70s, hoping to capture a classic Motown feel. The movie went in and out of pre-production throughout the years, until stars Whitney Houston and Kevin Costner finally signed up.

Movie geekishness: Interesting that the romance is told from the man’s point of view. If this were a trash airport romance novel, it’d be told from the woman’s POV, with her breaking through the alpha male’s tough guy exterior. In The Bodyguard, there’s little sense as to what inspires Rachel to ask Farmer on a date that first time.

Thoughts upon this viewing: I don’t think the movie works. I’m not feeling the romance, because the two leads are mostly jerks to each other the whole time. I’m not feeling it as suspense/mystery, as the villain is kept in the distance for most of the movie. That song, though.

Next week: Get busy living.